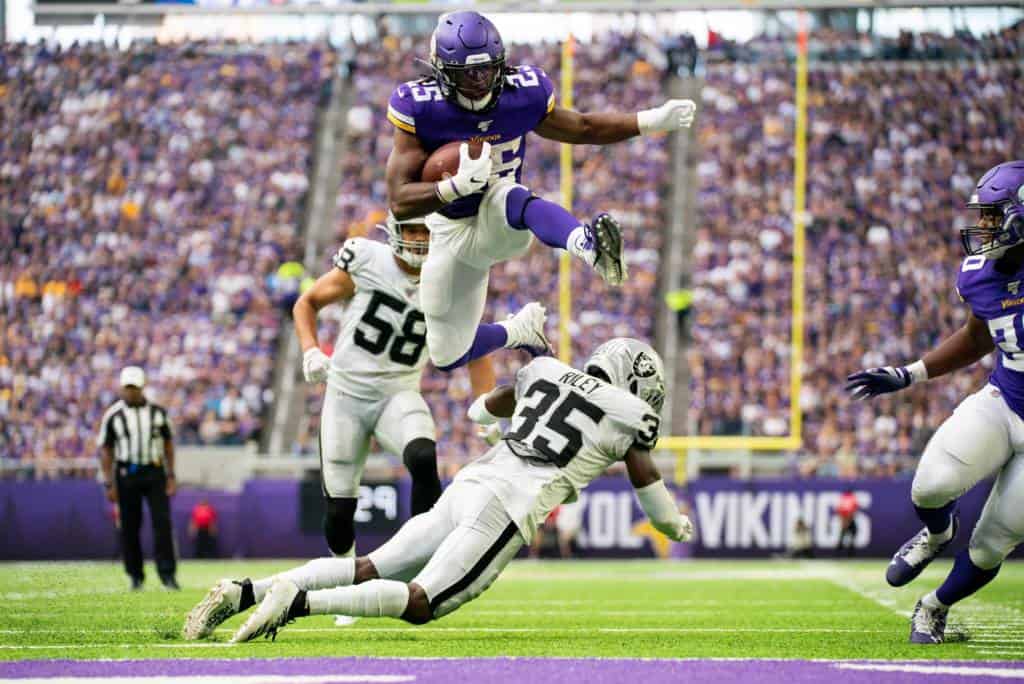 These backup running backs could win you your fantasy league.

While some fantasy analysts argue about the significance of drafting an RB handcuff, these players are an essential part of any fantasy team. Whether they’re desperate waiver wire adds or a strategically placed late-round pick, a backup running back can win you a week at any time in the season.

Here’s a look at my top five handcuffs and some honorable mentions for deeper leagues.

All ‘cuffs in this article are currently RB37 or worse (109 overall) in Underdog Fantasy Best Ball ADP. Use promo code RSJ (or click this link) to get a 100% first deposit match on Underdog Fantasy to take advantage of these juicy ADPs in season-long best ball contests.

Darrel Williams has one of the best paths to being a starting running back at any point this season. As James Conner’s primary backup, Williams can be a lead back in one of the best offenses in the NFL. Conner has a history of injuries, missing 16 games in five seasons. While in Kansas City, Williams was able to take advantage of the handful of times he was able to fill in as a starting running back. He possesses a three-down skill-set that makes him valuable between the tackles and in the passing game.

Williams finds himself in another great situation backing up Conner and has league-winning upside if Conner goes down this season. Williams is currently going as the RB52 in Underdog Fantasy best ball drafts.

Williams is RB46 in The Wolf’s 2022 Fantasy Football Rankings.

The LA Rams running back room wasn’t an elite fantasy option last season, but Darrell Henderson and Sony Michel produced respectable RB2 numbers when they were given the opportunity. In Henderson’s starts from Week 1 through 12, he averaged 15.7 PPR points per game and was RB13 during that time. Third-year back Cam Akers didn’t look great in the postseason after coming back from his Achilles injury and historically speaking, no NFL running back has returned to pre-injury form following that injury.

As Akers’ primary handcuff, Henderson has proven to be a viable option in fantasy on a high-powered offense and compares similarly to Williams’ situation in Arizona. If given the opportunity, Henderson can slide right in as a strong flex option on any roster.

A rookie running back in the top five handcuffs???? YES! Rachaad White is backing up Leonard Fournette in one of the most explosive offenses in the NFL. White already has standalone value as a receiver — ranking first in PFF receiving grade for the 2022 draft class. With rumors of Fournette weighing 260 pounds and Fournette’s history of injuries (18 games missed in five seasons), White has a strong chance to slide in as the RB1 in Tampa Bay.

White has every chance to have standalone value this year, but if given the chance to start, he could be one of the best fantasy assets across all platforms. It’s clear the rookie oozes confidence, but he’ll have to gain Tom Brady’s trust in camp to get the nod on passing downs. If he can, then he could be the next James White, Shane Vereen, Dion Lewis, or Kevin Faulk for TB12. White is currently being drafted as the RB39.

Mattison has been a handcuff savior multiple times throughout his career. In his last five starts for the Vikings, Mattison hasn’t finished lower than RB13 and has been as high as RB4. In those starts, he averaged 21.7 PPR points per game.

In a revamped offense with a new head coach, there could be a cause for concern that Mattison may not be the set it and forget it back he had been in the past. But, he’s proven it over the two seasons that he is one of the best handcuffs and faces zero real competition to be the team’s RB2.

Mattison is RB37 in The Wolf’s 2022 Rankings and is going off the Underdog Fantasy boards at RB41.

The Broncos remodeled its offense this offseason, bringing in Packers OC Nathaniel Hackett as head coach and Russell Wilson to lead the offense. Hackett is known for flowering his running backs with targets and producing RB1 finishes in nearly every season as a coordinator.

While everyone is drooling over Javonte Williams (including us), Gordon is going off the board at RB37 even though he finished RB22 last season.

Gordon is easily the best value for a handcuff running back and is one Williams’ injury away from being a high-end RB2 or low-end RB1. In his career, Gordon has had three RB1 finishes and two RB2 finishes. Make sure to grab Gordon in the 8-to-10 round range because he not only has some standalone value, but he also has league-winning starting value at his ADP.