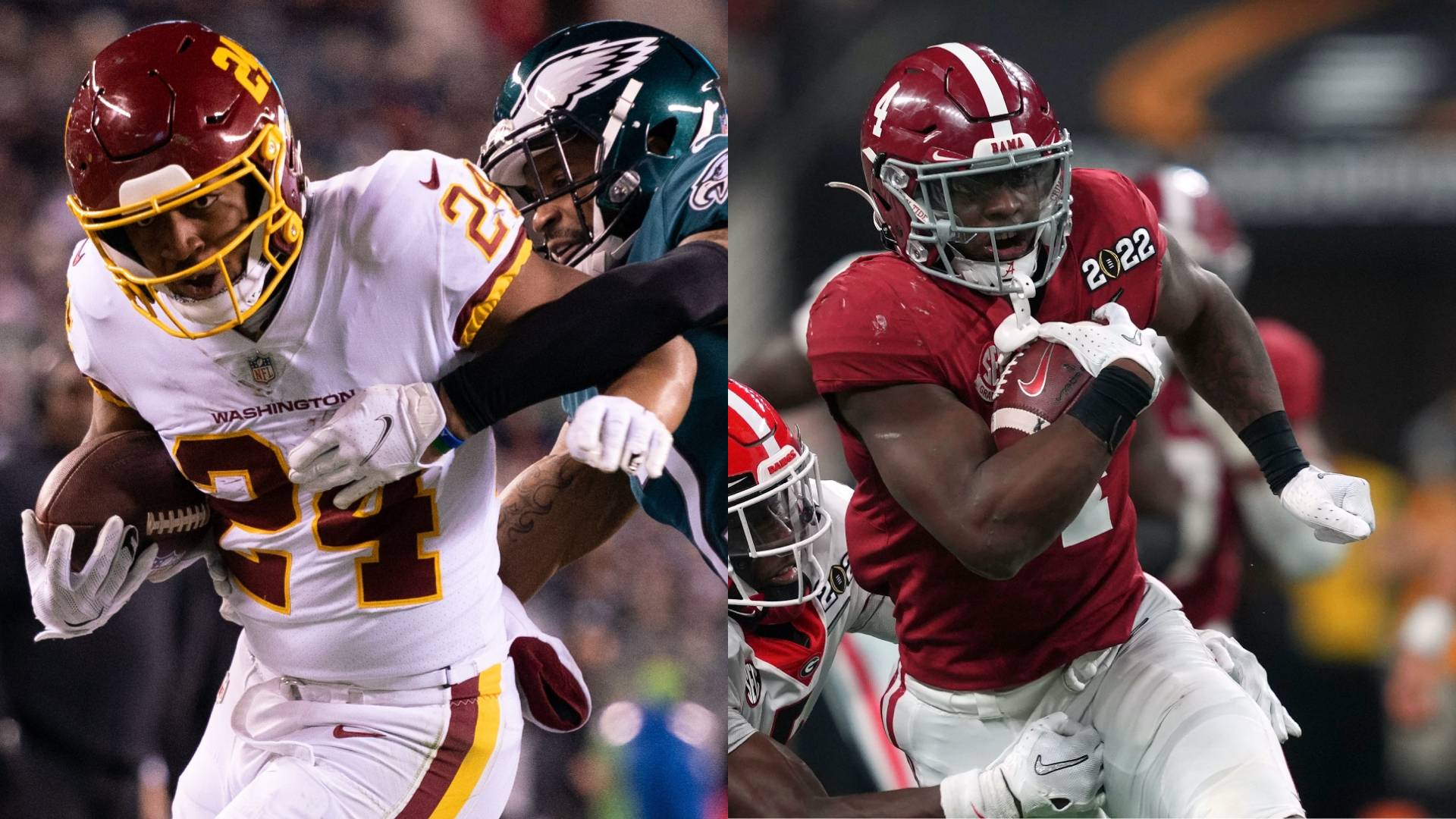 Are we in for a dreaded RBBC in Washington?

Earlier in May, Washington Commanders head coach Ron Rivera called Antonio Gibson and third-round pick Brian Robinson a “one-two punch”, likening them to DeAngelo Williams and Jonathan Stewart during his time in Carolina.

But, Rivera and OC Scott Turner did plenty of comparisons of A-Gib to Christian McCaffrey last offseason, too.

Clearly, you can’t have both.

So where does the truth lie?

So, is Robinson supposed to be the Jonathan Stewart of this backfield or the DeAngelo Williams?

Good luck finding those who will tell you that he’s got the explosiveness that they did.

Charlie Campbell of WalterFootball will give B-Rob more credit than most scouting reports, and DLF’s Shane Hallam says he “will be underrated as he could become a bellcow.”

Look around, and the rankers aren’t buying it. Even DLF has his consensus ranking as the 22nd best rookie off the board, and the seventh rookie running back.

The NFL views Robinson differently than it did Stewart and DeAngelo. Both Carolina backs donned first-round draft capital, while Robinson’s name wasn’t called until the end of the third.

Concerns about his ability to be more than a yards-after-contact, power runner weren’t calmed after posting a burst and agility score only in the 15th and 7th percentiles respectively, as seen on PlayerProfiler.

We have eight-plus seasons of reference into how Rivera deployed his backs in Carolina, and in particular, how Stewart and Williams’ production changed when Rivera was hired in 2011.

Prior to that, Stewart and Williams had two seasons together under John Fox. Everyone should be reminded that Fox was so unafraid of committing to the run, that as coach of the Bears he was content with a rookie Mitch Trubisky throwing just seven passes during a game.

A shade over 1,500 of those yards and 18 of those touchdowns belonged to Williams as he scored the RB4 rate in half-PPR, with Stewart at the RB35 rate (out of RBs who played at least seven games).

That next season, the duo combined for 5.15 yards-per-carry again as DeAngelo produced at the RB11 rate, Stewart at the RB21 rate. They combined for 437 rushes, and that’s with DeAngelo missing three games.

2010 was too injury-riddled to get a good beat for our purposes.

When Rivera arrived in 2011, Stewart and Williams’ combined carries dropped all the way to 297. But, Rivera’s arrival also coincided with the drafting of Cam Newton.

If we account for everyone who made significant carries during Ron’s tenure with the Panthers, we get:

And after Rivera’s hiring with Washington:

The tl:dr of this tells some interesting things:

THE STILL-UNIQUE CASE OF ANTONIO GIBSON

You might be thinking, if third-round draft capital is a mark against Brian Robinson, shouldn’t it go against Antonio Gibson as well?

A-Gib’s college career in connection with his NFL run is and will remain one of the weirdest. Compare the 258 carries he received last season to the 33 he got his entire time at Memphis, while technically being a WR, who only had 44 receptions his entire college tenure.

We hear of players switching to the tight end position which they’ve never played before, but WR to RB? Quite the rarity.

And so even heading into his third season, he is still learning the position, behind the curve compared to the vast majority of backs.

In the last game of last season, so Gibson says, it clicked. Future numbers will show if he had an epiphany and if so, there’s still room for him to be a dangerous fantasy threat, and an RB1.

If Robinson is Jonathan Stewart, then I guess Gibson is DeAngelo Williams. And for as good as Stewart was, when Double Trouble ran the show in ’08 and ’09, when both were active, DeAngelo out-carried Stewart 17 to 11 per game, producing at the RB4 and RB11 rate in half-PPR those two seasons.

That’s correct, a committee back who produced at an RB4 rate. Double Trouble was special.

The Panthers teams in ’08 and ’09 were 3rd and 2nd, respectively, in run play percentage. And with two first-round RB talents, understandably so.

But it’s a lot to expect the Commanders backfield to command that kind of work. And so if there’s one player who unfortunately stands not to meet the standards of Double Trouble’s glory days, the signs seem to lead to Brian Robinson.

Gibson still has the upside. And we know that Ron Rivera is open to changing his scheme if the talent demands it. So, the gamble doesn’t appear to be whether or not the coaching staff will be open-minded, but whether or not Gibson will realize the next step in his game.

With two young backs (Gibson is still only nine months older than B-Rob) who both have relatively little tread on the tires compared to a lot of other backs their age, this could be a tandem that stays together for several years.

This site has different staff working the 1QB rankings than they do the Superflex ranks. So enjoy the diversity of viewpoints:

It looks like Wolf is more threatened by Robinson’s arrival than DLF. As the start of the season creeps closer, more clarity could come, especially in preseason action. Keep up with The Wolf as he constantly updates his rankings.