Rachaad White 2022 Fantasy Outlook: How Will the Versatile Rookie Impact the Buccaneers Backfield? 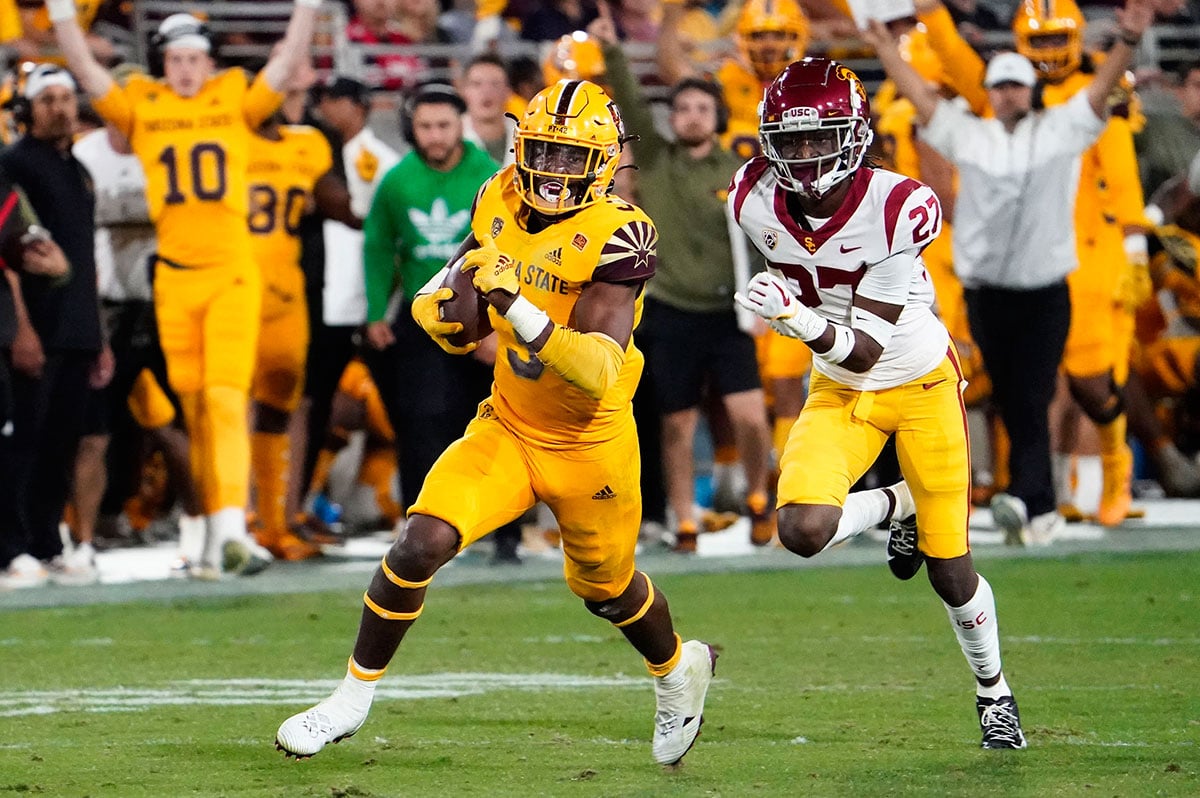 Rachaad White could be a valuable year-one fantasy asset.

The Buccaneers added depth and a spark of electricity into their backfield when they selected Arizona State’s Rachaad White with their 91st overall draft pick. Although the Buccaneers backfield looks crowded on paper, it is ripe for the picking behind Leonard Fournette.

White is not only built like an early-down back (6-feet, 214 lbs), but he has the hands to give him future three-down upside. After dominating D-II and JUCO ball for three seasons, he transferred to Arizona State, where he led the Sun Devils in both rushing yards and receiving yards in a COVID-shortened 2020 season. White exploded in 2021, putting up nearly 1,500 yards of total offense and 16 touchdowns in only 11 games — highlighted by 456 receiving yards on 43 receptions.

The shifty back makes defenders miss on the regular and is a human highlight reel. He even silenced some doubters with his 4.48 40-yard dash. Most notably for fantasy purposes, White snagged 51 receptions in only 15 games in Tempe and is one of the top pass-catchers in the class.

His former coach Herm Edwards agreed with the assessment and said White can do it all.

“A very versatile player,” Edwards told Sports Illustrated. “Can run inside, has enough speed to make big plays once he can get outside on the perimeter, and very very talented player as far as catching the football out of the backfield. Has really great hands. So you’re getting a complete football player.”

FIT WITH THE BUCCANEERS

After re-signing Leonard Fournette and letting Ronald Jones walk during the off-season, the current depth chart shapes up to be Fournette, Ke’Shawn Vaughn, Giovanni Bernard, and White. Fournette will be cemented into early-down duties, but he’s also proven to be a consistent pass-catcher. The veteran recorded 69 receptions on 84 targets last season. Either way, it’ll be a three-headed competition for the RB2 job and a three-way competition between Fournette, Bernard, and White for third-down duties.

On top of the talent, it’s safe to say White has some fire inside of him. After a casual search of himself on Twitter (love the move, btw), he slid into the DMs of fantasy football writer, Aaron Schill, who indirectly compared White to Ronald Jones. He didn’t compare the two as football players, but he compared them as fantasy football assets.

White clapped back with this DM:

Eventually, the two shook hands and moved on.

This DM slide may look corny to some, but I love the move by White. He made a fantasy nerd (one of us) quickly apologize and backtrack. It also showed White’s confidence in himself as a player.

This wasn’t the first time White spoke up about his role with the Bucs. Plain and simple, he’s coming for Lenny’s job.

“My expectation, my goal is I’m going in there competing,” White said, via Luke Easterling. “I want to be the starting running back. That’s how it go. I know I got Lenny in front of me. And you know I’m going to soak up a lot of knowledge from Lenny in that running backs room, and Giovani Bernard. That’s just the type of guy I am. You know, I’m always a competitor first.”

It’s clear White does not lack confidence and while some people may prefer a rookie to be humble, I’m falling in love with the former Sun Devil already.

Although the Bucs’ backfield feels crowded on paper, it could really be White who steps up behind Fournette. But, let’s be real for a sec. It really comes down to who Tom Brady trusts to be his third-down receiving back and pass protector.

“(Brady) is going to be happy, trust me,” Herm Edwards added. “He’s going to say, ‘Boy this guy here, he’s pretty good. I can throw him the ball and all of the sudden…he can make a couple people miss and he’s running down the field.’ Last time I checked, that’s kind of important.”