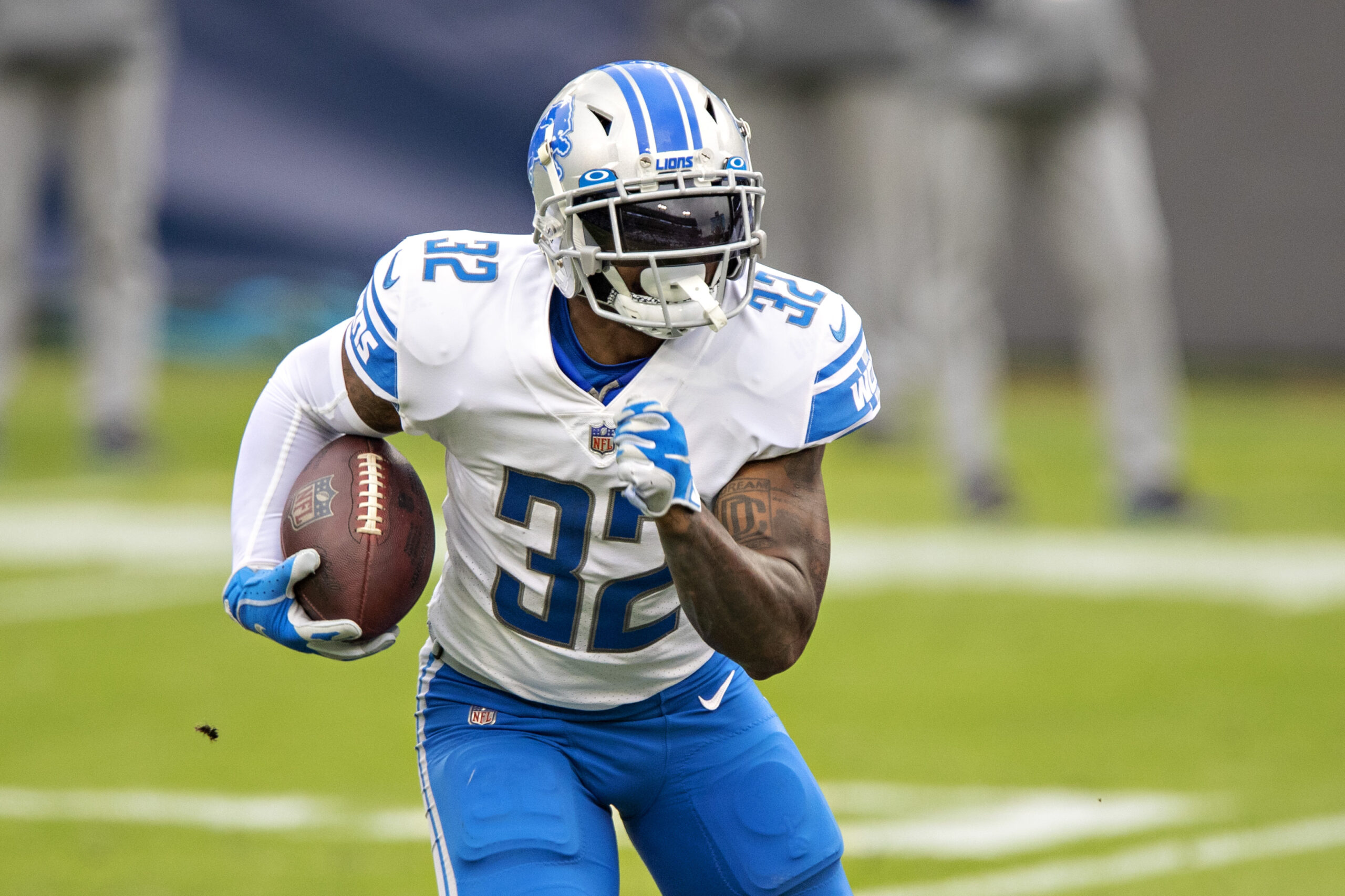 XFP essentially shows what a typical player would have done with the opportunities seen by any given player. For a more in-depth breakdown of Expected Fantasy Points, click here.

I publish a weekly trade value chart with specific values for every player based on a similar methodology. For tips on negotiating trades, click here.

Below, you can find expected fantasy points for each player along with their average carries, targets, and air yards through Week 4.

Check out the PDF DOWNLOAD and EXCEL DOWNLOAD links if you prefer to browse the data that way. The Excel download link has sortable data broken out for Weeks 1-4 individually.

After getting off to a scorching start in 2021, D’Andre Swift turned in his worst performance of the season in Week 4, scoring only 8.9 PPR points. However, Swift continued to see solid usage, finishing with 17.0 XFP in Week 4. He carried the ball twice from the five-yard line, and narrowly missed scoring on an end-zone target, but he was unable to convert any of his three high-value opportunities into touchdowns.

Despite the poor result, Swift played a season-high 73% of the snaps in Week 4. Coach Dan Campbell talked about giving Swift a more significant workload as he heals from a groin injury, and at least in terms of snaps, lived up to his word this week. Jamaal Williams did out-carry Swift 14 to 8, but Swift saw all five of Detroit’s running back targets on the day. As long as Swift continues to dominate the snaps, the carries will likely swing back in his favor in future weeks. Plus, Swift is still commanding high-value targets (a target is worth about 2.74 carries) and goal-line touches, which is exactly the type of usage we want to target in fantasy.

Swift is a buy-low target due to a subpar showing in Week 4, but Calvin Ridley has been one of the most disappointing players this season. Despite the lack of fantasy production so far, Ridley’s expected numbers look incredible. His 20.2 XFP average is tied with Keenan Allen for sixth-best among receivers. He’s averaging 10.5 targets per game (tied for fifth among WR), and 113.3 air yards (tenth). These numbers are all elite, and they are trending up after Ridley saw 13 targets and 198 air yards in Week 4.

Many fans have blamed quarterback Matt Ryan for Ridley’s poor 2021 production. While that was somewhat accurate through the first three weeks, Ryan came up huge this week, throwing for 283 yards and four touchdowns in a heartbreaking comeback loss. He graded relatively poorly in Weeks 1-3 but may have turned the corner, as he put up an elite 92.0 PFF grade in Week 4. Ryan doesn’t need to continue to play elite football for Ridley to put up WR1 numbers. Given Ridley’s talent and elite usage, expect some positive regression as the season moves forward.

On the surface, Damien Harris‘s numbers don’t look special. He has struggled the past two weeks, but that is mainly due to brutal matchups. The Patriots have faced the Saints and Buccaneers the previous two weeks, who rank second-best and best in rushing yards allowed, respectively.

In Weeks 1-2, when Harris did not play against a top-two run defense, he averaged 15.3 XFP per game, compared to just 6.2 in Week 3-4. Even though the Patriots knew they couldn’t run the ball against Vita Vea and the Bucs, Harris still played 61% of the Week 4 snaps, which is very encouraging for his usage against softer run defenses. The Patriots play the Texans, Cowboys, and Jets the next three weeks, which should provide more opportunities for Harris to carry the ball. He probably won’t win you your league, but if you need help at running back, Harris can be acquired without giving away too much.

It’s pretty obvious that Cordarrelle Patterson isn’t going to score three touchdowns every week, but the fact that he did it while only playing 23 total snaps is absurd. He scored 34.6 PPR points on just 14.1 XFP, which was the second-highest outperformance of the week behind only Tyreek Hill. You don’t need me to tell you that a player who barely played over 30% of the snaps isn’t going to sustain this level of production, but it’s certainly possible you play in a league with managers who love to chase recent production.

Patterson could certainly see a bigger workload in the future, but teammate Mike Davis played 51 snaps (over twice as many as Patterson) and made some highlight plays of his own, including an insane touchdown reception where he broke three tackles on his way to the end zone. Davis is 22nd in PFF grades among running backs, and his role doesn’t seem to be diminishing.

Patterson is essentially tied with Chase Edmonds in the FantasyPros ROS ECR right now, which seems ridiculous to me. Edmonds is currently the XFP RB12 with 15.8 per game and is a James Conner injury away from potentially having elite upside. If you could package Patterson and maybe a small depth piece for a player like Edmonds, I would jump on that opportunity.

I suggested buying Clyde Edwards-Helaire earlier this season when his value was lower. While he has produced solid fantasy results the previous two weeks, his workload still hasn’t changed much. Over the past two weeks, CEH is averaging 13.4 XFP per game, but he has scored 18.2 PPR points per game over that stretch. His production has been buoyed by finding the end zone twice, but he’s still not being used in the passing game.

The thesis for drafting Clyde Edwards-Helaire has always centered around a presumed workhorse role in a high-powered Chiefs offense. In theory, he should be part of a potent passing attack and see plenty of scoring opportunities given the quality of the offense. However, CEH has still only averaged 2.5 targets per game over his last two games and has seen only seven targets in four games.

To make matters worse, he played only 52.2% of the snaps last week and was vultured by backup Darrel Williams at the goal line. CEH played 72% of the snaps in Week 1, 65% in Week 2, and 62% in Week 3, so he’s trending in the wrong direction. Given the major questions about his role in the passing game and dwindling snap share, I would see if someone else is willing to pay up for his recent production.

That’s all I have for Week 5. Now that you’re an Expected Fantasy Points Expert, you can use the tool to dominate your league. Check back next week for an updated trade value chart and more players to buy low and sell high. Please send any questions or feedback to @RSJ_Jackson on Twitter!