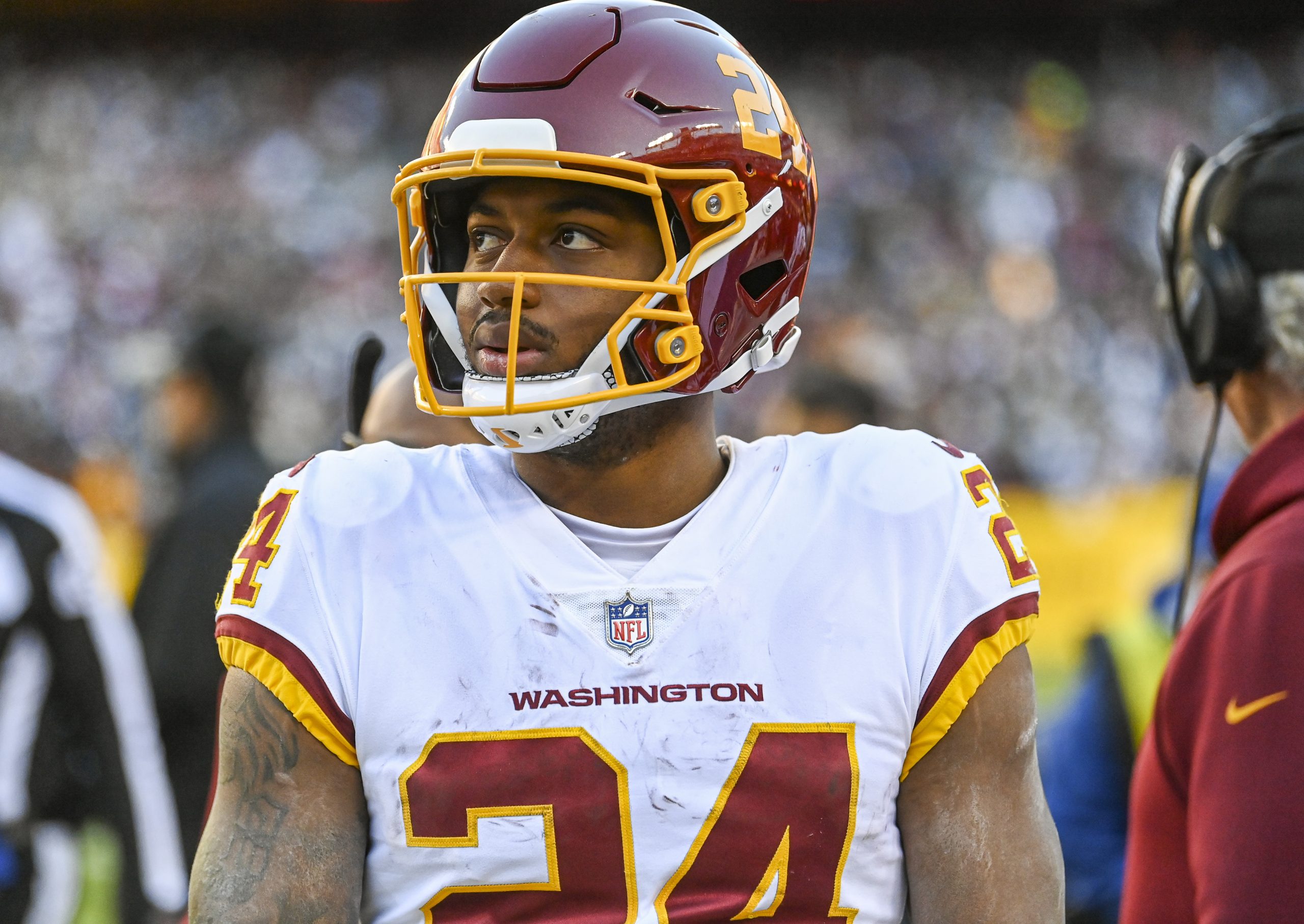 Hop on these 2022 season-long props before they vanish.

Welcome to our PrizePicks 2022 NFL Futures Player Props! If you’ve never played, PrizePicks allows users to pick and combine two to five player props to win up to 10x on any entry. PrizePicks designates a player prop or fantasy football point total on select players and users will choose whether that player will go over or under that total. If you’re a player prop bettor who typically uses a sportsbook, sign up for PrizePicks using the link below to view and take advantage of their very generous lines. Although the user can combine picks from a variety of sports, this article focuses solely on their 2022 NFL Futures list.

NEW USERS: Click this link or use promo code RSJ after downloading the PrizePicks app to get a 100% match on your first PrizePicks deposit up to $100.

This right here is my favorite play on the PrizePicks board. We’ve been huge Antonio Gibson guys, but 2022 will not be his year. Sure, Gibson is coming off a career year where he rushed for 1,037 yards on 258 carries (4.0 YPC) and caught 42 balls for 294 yards. However, the team re-signed JD McKissic and then added Alabama RB Brian Robinson Jr. to create a three-headed committee.

Barring health, it appears that Gibson and Robinson will split early-down duties, while McKissic will own third down. Smash this under before it’s taken off the board.

Some way, somehow, Trevor Lawrence managed to throw for 3,641 yards last season under the “guidance” of Urban Meyer and Darrell Bevell. Now with Doug Pederson and Press Taylor calling the shots, Lawrence should regain his confidence and swagger in year two. Not to mention, Travis Etienne will return from injury and the team improved its surrounding talent by signing Christian Kirk, Evan Engram, and Zay Jones. It’s not the sexiest supporting cast, but Lawrence will easily hit 4,000 yards passing.

The AFC West is going to be shoot-out central. Not only did the division already boast Herbert, Patrick Mahomes, and Derek Carr, but it added Russell Wilson to the only team that was missing a quarterback. Last season, Herbert threw for over 5,000 yards and I would expect that to remain the same in 2022. The Chargers added Gerald Everett at tight end and boosted its offensive line — which were two off-season needs. I might’ve been a year too early on the Herbert for MVP train.

While we thought there were better fits for our consensus No. 1 rookie, it’s clear the Jets have big plans for their second-round pick. Breece Hall is entering a backfield with the talented Michael Carter, but the two have different skill sets. Even in a dreadful offense as a rookie, Carter rushed for 639 yards on only 147 carries. You don’t think Hall can exceed 651 yards as the team’s early-down horse? This is stealing.

All Brandin Cooks does is record 1,000-yard seasons and we should expect him to eclipse that mark for the seventh time in nine seasons. Davis Mills might actually be good and in their 12 games together last season, Cooks notched 786 yards on 74 catches. As long as Cooks stays healthy, he’ll fly over this total.

There were many skeptics about the Cardinals trading a first-round pick for Hollywood Brown. While it might not make much real football sense, it’s great for fantasy. As former collegiate teammates, Hollywood and Kyler Murray already have an established rapport. Brown led the Sooners in receiving during Murray’s Heisman season and the two should come hot out of the gate. What makes me love this total is the six-game DeAndre Hopkins suspension. Brown should be the team’s WR1 until Week 7 and he will be their season-long lid-lifter. Expect Kyler and Hollywood to replicate their college magic in the desert while he sails over 1,000 yards receiving for the second-straight season.

I like George Pickens as a player and I love his landing spot. Who could ever argue with the genius who identifies receivers for the Steelers? Nonetheless, Pickens is definitely behind Diontae Johnson, Chase Claypool, Najee Harris, and Pat Freiermuth on Mitchell Trubisky’s target totem pole. Plus, Pickens has an injury history (12 missed games in three years) and a raging temper, so it wouldn’t surprise me if he missed a few games during his rookie season. He’s not cracking 650 yards as Trubisky’s fifth option.

This reasoning is similar to why I picked Pickens to go under. I love Jahan Dotson as a talent. He roasted my Ohio State Buckeyes on numerous occasions. However, he’s behind Terry McLaurin, Curtis Samuel (if healthy), Logan Thomas, and JD McKissic. Also, his quarterback is Carson Wentz. There’s zero chance Wentz can get three or more pass-catchers over 650 receiving yards. Just last season, Michael Pittman led the Colts with 88 receptions for 1,082 yards. Then, the Colts had SIX pass-catchers finish between 300 and 400 yards receiving. Wentz is going to keep checking down and cashing checks like the thief he is — it’ll just be in Washington and not Indianapolis. Dotson isn’t going over.