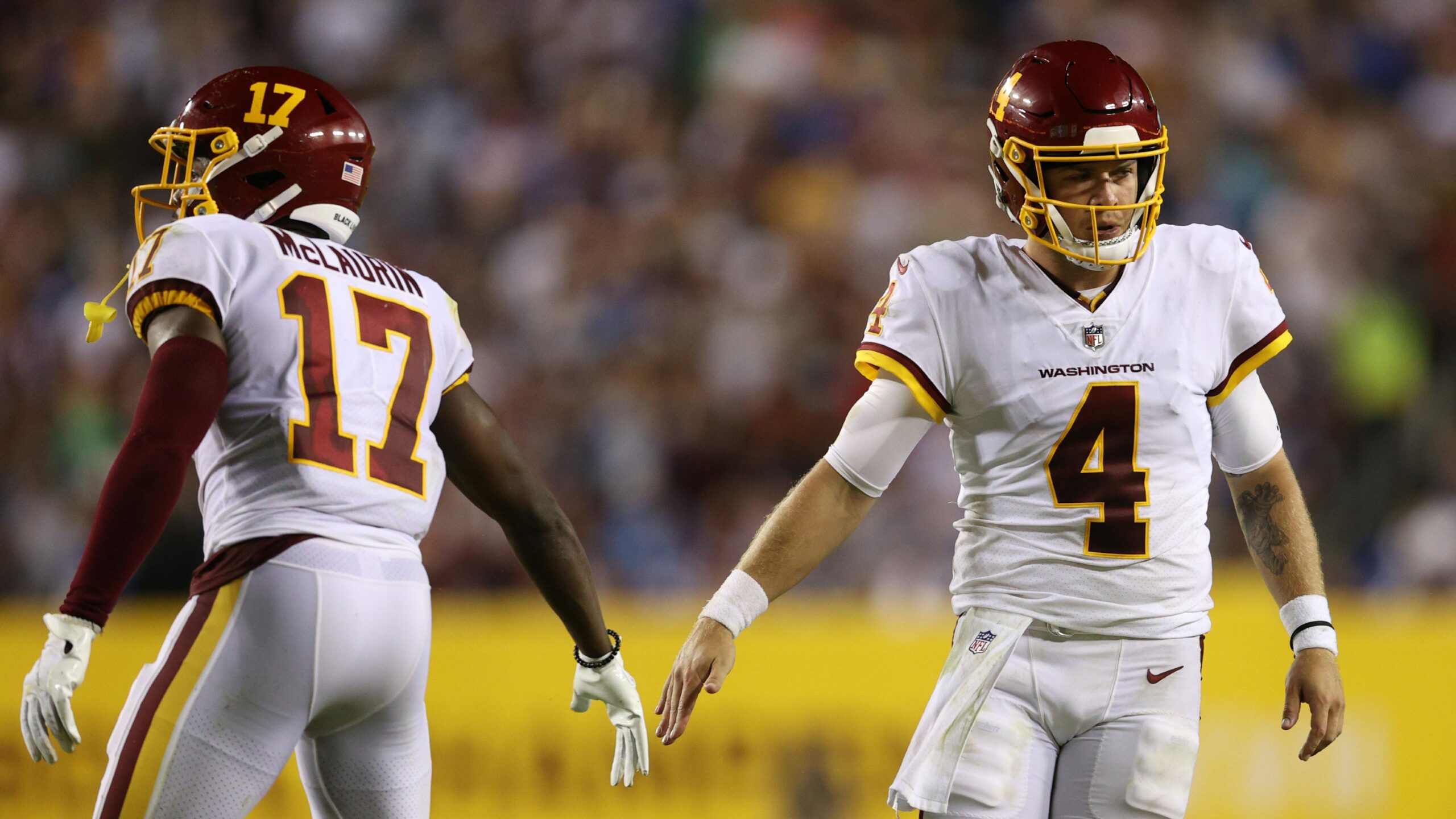 Utilize our Week 6 DFS Cheat Sheet to take home some cash this weekend.

Although we are primarily a redraft fantasy football website, we aren’t too shabby at DFS. Below, we’ve combined the brains of our excellent DFS staff (The Wolf, JimboSlice, Kendall Brown, and Tailback Tino) to create an NFL DFS Week 6 DraftKings Cheat Sheet that’s sure to win you big money this weekend.

Join The Wolf and CJay for the Fantasy Tailgate every Sunday at 11 AM EST with your DFS and redraft lineup questions. 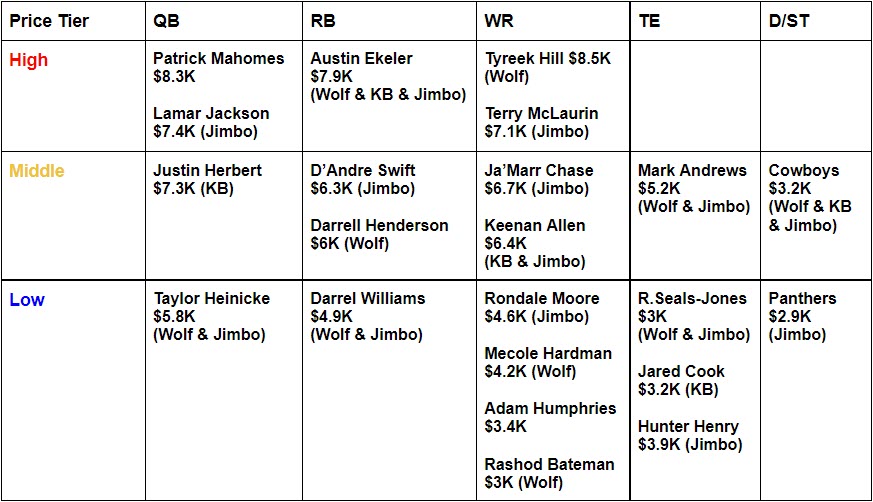 HIGH-PRICED PICKS TO BUILD AROUND

The Wolf: Tyreek Hill ($8500) – As the chart shows, my favorite game to attack (and I’m likely not alone) is the Washington – Kansas City showdown. The 55.5 O/U is the highest on the Main Slate by +4 points, and honestly I see them smashing this given they’ve allowed the most (KC, 32.6) and second-most points (WASH, 31.0) per game respectively while sporting Top-12 offenses.

In a shootout script, I expect Tyreek, who’s already topped 40 & 50 FPs on separate occasions through five games, to put up a patented blow-up. WASH has been burned deep routinely this year, most recently for 24 & 26 by Marquez Callaway and Emmanuel Sanders. If those guys can feast, I expect Tyreek to have a field day as the guy you can’t win big without.

Kendall Brown: Austin Ekeler ($7,900) – What’s not to like about Austin Ekeler? He’s averaging 18.4 opportunities per game in one of the league’s highest-powered offenses. He’s already scored seven touchdowns in five games and there are no signs of that slowing down. We saw what Jonathan Taylor was able to do to this Ravens defense just a week ago and I expect more of the same from Ekeler this week. Ekeler is the closest thing to CMC that we have in fantasy this year and this is likely your last chance to get him at sub $8K. Enjoy it while it lasts.

Jimbo: Lamar Jackson ($7,400) – It might be a little recency bias from that MNF explosion, but few players in the league possess Jackson’s ceiling. I love playing mobile QB as they provide so much upside with their legs. Similar to The Wolf’s statement above, I think this Ravens/Chargers game has huge potential as I’d love to double stack with Lamar, Marquise Brown, and Mark Andrews. Then run it back with Keenan Allena and Austin Ekeler. If I wanted to attack the Chiefs/Washington game through, then I would have said Terry McLaurin as my guy and gone from there. Still want Terry in my lineups though.

The Wolf: Mark Andrews ($5200) – I fully expect Andrew to be “the chalk” this week, but just like Henry & Mattison last week, it’s chalk worth eating while you differentiate elsewhere. While the Chargers have been one of the stingiest pass defenses, allowing the 7th fewest yards (214.2), they actually surrender the second most FPs to TEs. Indeed, that stat was buoyed by David Njoku’s recent blow-up, but every TE who’s faced them has topped 10+ FPs. Coming off a monstrous 42 FP day, Andrews benefits from the MNF Discount, and is way too underpriced for the upside he carries in a likely shootout.

KB: Keenan Allen ($6,400) – There’s a lot of noise around Mike Williams and the breakout season he’s having for the Chargers in 2021. While Williams leads the team in air yards and aDOT, Allen actually has a higher target share and has more red-zone targets than Williams. The Ringer Gambling Show, hosted by Warren Sharp, called out something I found really interesting. The Ravens are fourth in the NFL in DVOA allowed to the WR1 (Marlon Humphrey). They are 23rd in DVOA allowed to the WR2! This is where they can be beaten. I have no idea who Humphrey will line up against but I’m assuming it will be Mike Williams which means Allen should have a field day against the Ravens’ number two corner.

Jimbo: Ja’Marr Chase ($6,700) – The rookie is putting all preseason doubts behind him, as he’s exploded onto the scene right from the get-go. Burrow’s WR1 in a pass-heavy offense, Chase has the second-best WR/CB graded matchup this week against the Lions and already has a serious knack for the end zone. Boyd and Higgins still get their target share, but nobody has Chase’s big play and touchdown upside in this offense.

The Wolf: Taylor Heinicke ($5800) + Adam Humphries ($3400) and/or Ricky Seals-Jones Stack – Heinicke, stacked with some lower-priced teammates, is a no-brainer way to correlate the high-priced Chiefs assets, all while saving you room for more studly complements like Austin Ekeler. Heinicke has finished as a Top-12 QB with over 20 FPs in 3 of 4 starts, and now gets his tastiest matchup yet — no team has allowed more points to QBs, and I expect 25+ with a 30+ FP ceiling.

Meanwhile, Adam Humphries is coming off 3 catches and 73 yards, and has a 7 catch day on his resume this year; Dyami Brown and Cam Sims are banged up, so Humphries could see steady volume against this leaky secondary.

Last, Ricky Seals-Jones (beyond having our namesake RSJ), saw a 20% target share in his first game — something Logan Thomas hadn’t all season while playing 99% of the snaps and running 87% of the routes. That’s elite usage, and while he only posted 5 rec for 41 yards, he should find much more success against a Chiefs team surrendering the 5th most FPs to seam-stretchers.

KB: Javonte Williams ($5,000) – If you haven’t read my buy-low article on Williams go check that out first. Williams has flashed his talent early and often this season and has proven to be one of the NFL’s hardest runners. He’s got a juicy matchup against the Raiders who are ranked 12th in most points allowed to RBs. Week after week, Williams has flashed as the better of the two running backs, but Vic Fangio continues to take the committee approach. This is far from a sure play but this is a great matchup for Williams to stake his claim as the RB1 in Denver.

Jimbo: Darrel Williams ($4900) – You have the new RB1 in a very high-scoring game getting a much bigger share of backfield touches thanks to injury. Williams should find himself and the Chiefs offense in the red zone often this week and as long as they don’t keep doing their weird trick plays down at the goal line, Williams has a fantastic chance to punch in at least one score. He should be a lock for over 15 touches and some receiving work.