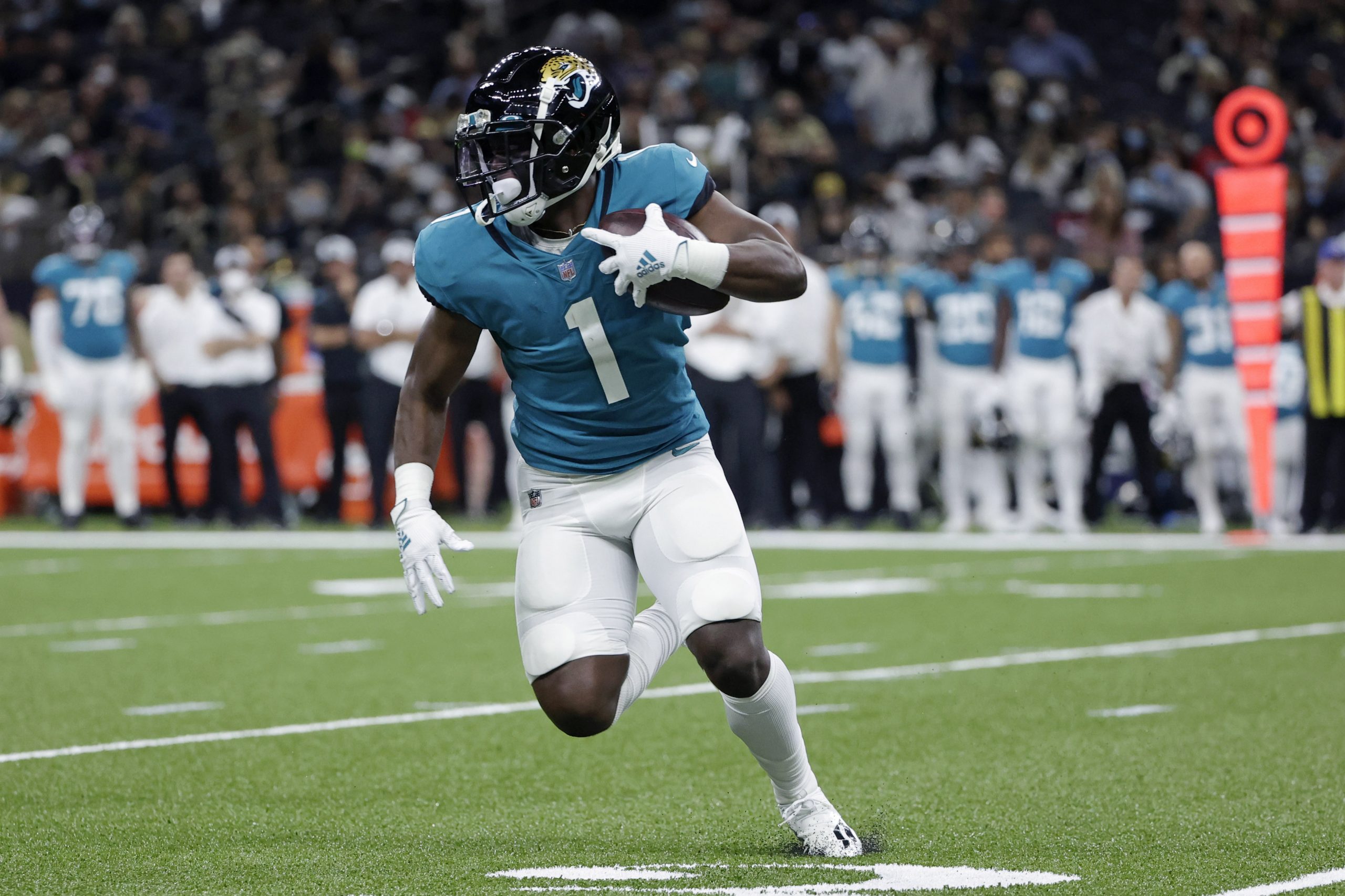 These running backs could be league-winners out of the Dead Zone.

If you are new to fantasy football, then welcome! If you are a seasoned vet of the game and are familiar with the running back “dead zone,” then I wish to extend you a heartfelt welcome as well.

For those that might be reading this and aren’t sure exactly what constitutes the running back dead zone, it’s a term used to describe the multi-round area of the draft where running backs historically fail to return value on their draft investment. Historically speaking, these running backs typically fall between round three and round six.

For context, here is a list of running backs that have Underdog Fantasy average draft positions (ADPs) between those four rounds:

Now, which running backs would you outright prefer to have over similarly drafted wide receivers like:

There are also quality tight ends like George Kittle and Darren Waller falling in this range as well.

But objectively, can anyone say for certain that that list of running backs will prove to be better than their wide receiver and tight end counterparts?

Every single one of those running backs has reasonable doubt surrounding them and their path to opportunity and touchdown upside.

With all of that being said, let’s dive into the running backs you should target in the dead zone and a couple of high upside dart throws near the end of the dead zone.

Take advantage of the ‘RB Dead Zone’ before you’re on the clock in your redraft league. Download the Underdog Fantasy app, use promo code RSJ or click the link, get a 100% first deposit match up to $100, and dominate their season-long best ball tournaments.

Breece Hall was the crown jewel of an otherwise underwhelming group of running backs in this draft class.

Hall showed off a workhorse skillset after two sensational seasons at Iowa State that saw him accumulate:

In other words, Hall produced with the ball in his hands no matter how it happened.

In an attempt to continue to build around quarterback Zach Wilson, the Jets continued to invest in their offensive line. The Jets have poured in a whopping $48.5 million of cap space into their offensive line in 2022, with two first-round rookies being joined by three free agent signings who will see a combined $58.7 million in guaranteed money.

The Jets have tailored their offensive line to suit a wide-gap zone-blocking scheme that meshes beautifully with Hall’s athletic profile.

Hall’s calling card is breakaway speed, as evidenced by his blazing 4.38s 40-yard dash at a staggering 217 pounds.

Now what about Michael Carter?

Carter was a productive running back for the Jets last season but his production largely came from volume and check down work. As a whole, Carter scored -17.4 fantasy points over expectation (FPOE) and finished as an RB2 or better in only five of his 14 games played.

Carter showed enough promise to merit seeing touches in this offense, but the majority of the work should immediately be dominated by Hall.

With many managers terrified of Jets continuing to be a cellar dweller with limited touchdown upside and the ambiguity of Michael Carter, Hall is a screaming value at his price point.

Hall checks in at 43 overall on The Wolf’s 2022 Fantasy Football Rankings.

It almost feels like heresy to bring Zeke into this conversation. Perhaps the general overwhelming negativity around how he finished the season last year is clouding everyone’s perception of him.

The list of questions around Zeke is staggering. Is Tony Pollard better at this point in their careers? Is Zeke just washed up? Is this a timeshare backfield now?

I don’t pretend to know the answer to these questions, but I do advocate for peeling back the curtain and looking into exactly what happened in 2021 that caused the wheels to fall off.

In 2021, after dealing with the aerial shootout between Tom Brady and Dak Prescott and the smothering Tampa Bay run defense, Zeke lit the ground on fire to start the season.

Looking at his 17-game pace numbers, Zeke was on pace for 280 rush attempts, 1,454 yards, and 17 touchdowns on the ground. He was pacing out for 301 PPR fantasy points which would have been good for *checks notes* the RB3 overall, just ahead of Najee Harris and just behind Austin Ekeler.

In fact, his 17-game pace changed drastically after Week 4, where he was on pace for only 863 rush yards and eight rushing TDs.

It was revealed after Week 4 that Zeke had suffered a partially torn PCL and that inhibited his play and ability to hit the holes with the same ferocity he was early on in the season.

This raises the question about Pollard. Is he going to see the field more?

Pollard is a dynamic, elusive back that provides an excellent change of pace for the Cowboys’ offense in Zeke’s stead. So why is Pollard not a threat to Zeke’s workload?

Since being drafted in 2019, Pollard has played 45 games. In 15 of those 45 games, Pollard has topped 10 rush attempts, one of those came in 2020 when Zeke was sidelined with an injury.

In other words, Pollard’s role was unchanged regardless of Zeke’s status.

So Zeke showed he still had plenty of juice last year prior to his injury, a solidified and lucrative red zone role, and a backup RB who doesn’t appear to be a threat to his workload. He’s finished as an RB1 every year he’s played, not counting the year he missed six games due to a suspension.

Zeke lands right at his ADP (35 overall) on The Wolf’s 2022 Fantasy Rankings.

I can already hear the chirping and backlash as I write these words.

Doug Pederson is a huge committee back advocate. James Robinson is back from his Achilles injury and is looking good. Travis Etienne is the second early-down option.

I’ve heard it all.

What people are forgetting is just how much more valuable pass-catching is when compared to rush attempts.

Barrett’s work looks at the average number of fantasy points scored inside the red zone per rush attempt and per target and compares them to their corresponding outside of the red zone values from the 2018 season to the 2021 season.

Let’s just assume Robinson comes back and commands most of the rush attempts. So what?

If Cam Akers’ rapid return from a similar injury is any indication, then Robinson will lack explosion and be largely ineffective in what doesn’t project to be a lucrative ground game to hitch your wagon to.

Jacksonville will likely be trailing most of the time this season and most of the fantasy value projects to come through the air.

Etienne is coming off of an unfortunate foot injury that stole what could have been an electric rookie season from us. As a prospect, Etienne was graded as a year-one starter and earned an elite score of 99 overall, courtesy of Next Gen Stats. The other four running backs to do so: Saquon Barkley, Jonathan Taylor, Melvin Gordon, Nick Chubb

So let’s look at Miles Sanders with Pederson at the helm.

Etienne brings the type of electric playmaking resume to the Jaguars offense that makes NFL and fantasy GMs alike salivate. His price tag makes him a smash value.

Etienne hovers the ADP on The Wolf’s 2022 Rankings, right at 39 overall.

Take advantage of the ‘RB Dead Zone’ before you’re on the clock in your redraft league. Download the Underdog Fantasy app, use promo code RSJ or click the link, get a 100% first deposit match up to $100, and dominate their season-long best ball tournaments.