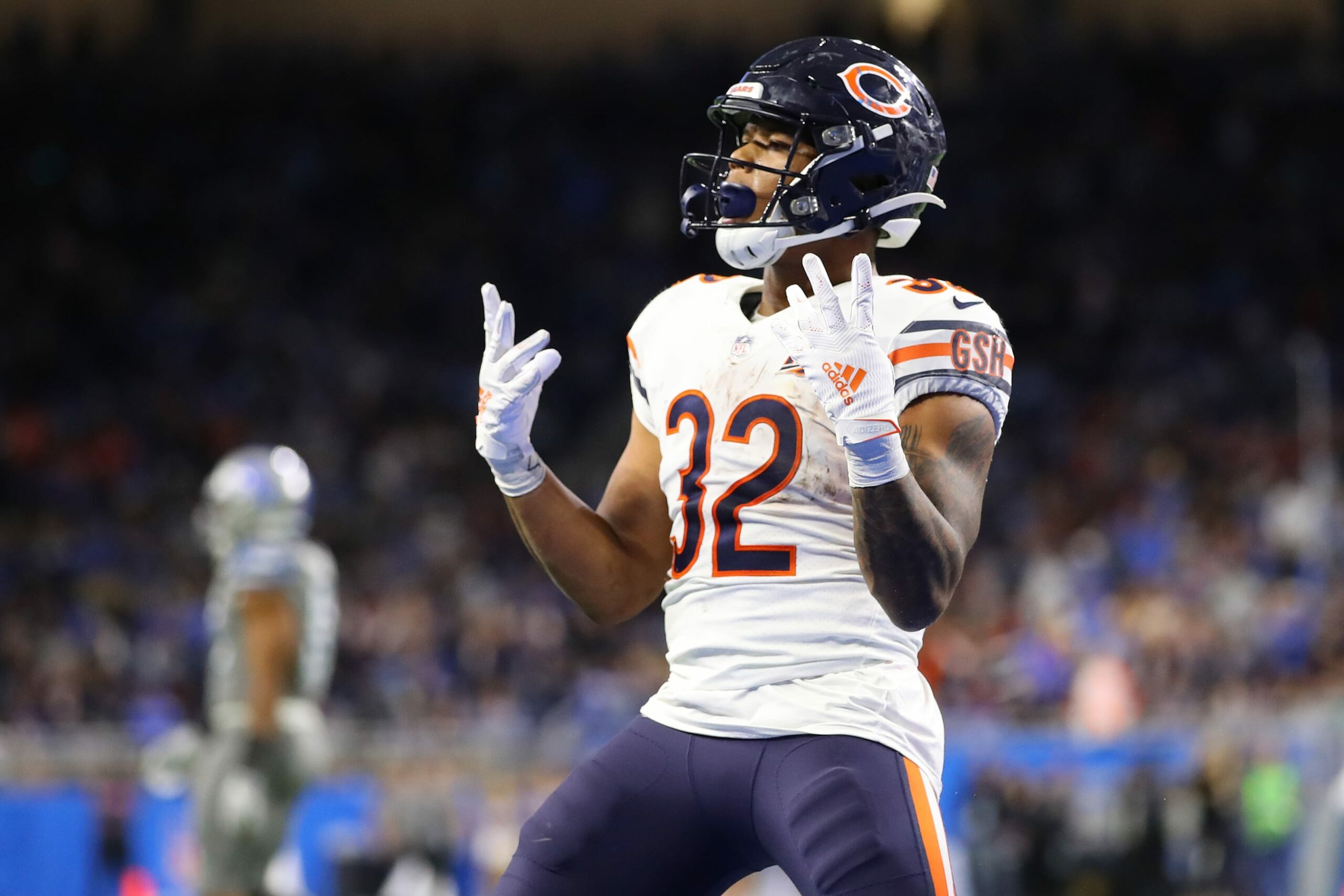 Breaking down the expected fantasy points of The Wolf's top 17-24 RBs.

Volume is the single greatest predictor of fantasy football results. But all volume is not created equal. You might have heard that a target is worth 2.74 times as much as a carry in PPR leagues, but even knowing that statistic doesn’t tell the whole story. Carries from inside the 5 are still more valuable than targets in the middle of the field. And long bombs with lots of air yards are more valuable than short dump-offs. Fortunately, we can use expected fantasy points to easily compare each player’s workload on a level playing field.

Comparing workloads on a per-game basis is best. Running backs tend to get injured a lot, but missing games one year doesn’t necessarily lead to missing games in the future.

To give you the most accurate comparison, I removed all games when players were inactive or suffered an in-game injury. In addition, I took the sample of games that I feel best represents each player’s 2021 situation. Some second-year players like Jonathan Taylor, Cam Akers, and D’Andre Swift broke out late in the season, so their early-season data is relatively useless for 2021 fantasy football rankings.

Check out part one for more information on expected fantasy points and my analysis of The Wolf’s 2021 Fantasy Football top-8 running backs. Part two covers RB9-RB16. I analyze running backs 17-24 in this article.

All data in this article uses full PPR scoring.

Carson suffered a foot injury during Week 7. He returned in Week 12 but was limited to just 37% of the snaps. Weeks 7-12 are excluded for injury.

Carson was a solid RB2 from a production standpoint last year when healthy, but his volume left a lot to be desired. He contributed well in both the running and passing game on a per-snap basis, but Carson finished just 19th out of the 24 backs in xFP per game in 2020. Like many others, his problem was a lack of snaps. Carson only played 55.8% of the snaps when healthy, which severely limited his ceiling.

It’s hard to say what will happen to Carson’s snap share in 2021. Carlos Hyde was the primary backup last year when healthy. He is now in Jacksonville, but former first-round pick Rashaad Penny was inactive until Week 15 last year and could slide into Hyde’s role. Carson only out-snapped Penny 30 to 28 in Week 17.

Seattle frequently used three different running backs in the same game last year, so returning backups Deejay Dallas and Travis Homer could potentially steal a few snaps as well. However, Penny has never been able to stay healthy, and Carson could see a snap increase if Penny gets injured or is simply ineffective. Carson probably won’t see a true bell-cow workload in 2021 but possesses some upside if he can increase his snap share.

I tried to select the 2020 data that best represents Swift’s situation in 2021, but his current situation has changed significantly. Former teammates Adrian Peterson and Kerryon Johnson are gone, and the Lions signed former Packer Jamaal Williams in free agency. The team also brought in a new coaching staff this offseason, including former Chargers coach Anthony Lynn as offensive coordinator.

“Jamaal is what I’d call a classic ‘A’ back,” Lynn said about Williams. “I like to break the backs down into A and B. My ‘A’ backs are normally my bigger backs. They can run between the tackles, block probably a little better than a ‘B’ back, they can also run the perimeter. I can leave those guys in there for all three downs.”

“My ‘B’ back comes in, he’s a guy that sometimes I want to use in space more,” Lynn continued. “He’s my speed-in-space guy. I feel like Jamaal would be an outstanding ‘A’ back. I like his energy, I like his pad level and the way he runs the football between the tackles.”

Lynn also complimented Williams’ ability as a pass-catching back.

“He brings something to the table that some backs don’t in this category,” Lynn said. “This man has soft hands, really good ball skills, you can use him in the passing game. . . . I didn’t realize until I studied him a little bit more in free agency that he was that good of a receiver. This young man has excellent hands and he has some really good route savvy.”

The new staff and new teammates limit the relevance of Swift’s 2020 numbers. His 16.3 xFP average and 63.1% snap share in 2020 were decent, but his workload has a wide range of outcomes in 2021. If you believe Lynn, you certainly should not draft Swift in 2021. Swift is a bit risky for my taste given the comments, but he does have considerable upside if Lynn is blowing smoke.

Through the first three weeks of the season, Montgomery was looking like a fantasy bust. He was barely out-snapping Tarik Cohen and wasn’t seeing enough overall volume. After Cohen tore his ACL very late in Week 3, Montgomery’s snap share instantly rose above 80% and stayed there the rest of the season. Montgomery was essentially the only back used, with Cordarrelle Patterson picking up the scraps when Montgomery sat briefly.

Cohen is back in 2021 and should be ready to retake the primary third-down role. In addition, the Bears brought in former Chief Damien Williams to bolster their depth at the position. Montgomery is no longer the only viable option, so his snap share seems likely to decrease significantly. To make matters worse, running quarterbacks typically check the ball down less often and eat into the pie of team rushing attempts. Justin Fields is expected to be the best running quarterback prospect since Lamar Jackson.

Montgomery’s 2020 volume is extremely impressive, but the additions of Cohen, Williams, and Fields suggest a decline in opportunities is coming.

McCaffrey played Weeks 1, 2, and 9. Davis was inactive Week 17. All of these weeks are removed.

Davis is going to a new team in Atlanta, so the 2020 numbers won’t be particularly useful for Davis. However, the Falcons don’t have another relevant back, and Davis showed he can handle enough volume in the running and passing game to meet this ranking.

Gaskin came out of nowhere and took Miami’s starting job by storm. He finished the season as the RB13 of this group in both xFP and PPG. Gaskin’s insane production for the cost helped win championships last year, especially since he delivered a 33.9-point explosion in Week 16.

Gaskin’s 2021 situation looks similar to last year, but the Dolphins added Malcolm Brown to the backfield. Teammate Salvon Ahmed also returns and looked solid in a couple of starts in 2020, but he was a nonfactor whenever Gaskin was active. Brown is probably better than any backup the Dolphins had last year, so he may slightly reduce Gaskin’s workload. Still, his 2020 numbers were solid across the board. He appears to have enough projected 2021 volume to meet or exceed The Wolf’s RB21 ranking.

Despite having a solid snap share, Sanders was disappointing in 2020 from both a volume and efficiency standpoint. The passing game was his biggest problem. Sanders caught a putrid 28 of his 52 targets on the season for only 197 yards through the air, and PFF ranked him as one of the worst receiving backs in the NFL. Unfortunately for Sanders, the Eagles drafted pass-catching specialist Kenneth Gainwell in the fifth round. Gainwell caught 51 balls for 610 yards in his final year of college and seems primed to eat into Sanders’ already poor aerial production.

To make matters worse, Jalen Hurts projects to be one of the highest-volume rushing quarterbacks in the NFL, and we’ve already talked about how running quarterbacks are bad for their teammates’ fantasy production.

On the bright side, Sanders should see better per-carry efficiency on the ground due to a healthier offensive line. However, improved efficiency won’t be able to save him if Gainwell takes passing down work and Hurts siphons his volume in both the running and passing game. If Sanders doesn’t significantly improve in the passing game and maintain his 2020 snap share, he could be a fantasy bust this year.

Jacobs saw a much better workload in 2020 than the other players in this range. His 18.5 xFP per game in 2021 was the ninth-best in the dataset. Jacobs was only targeted 45 times, but he made up for it with 273 carries, good for third-most in the NFL. Unfortunately for Jacobs, the Raiders signed Kenyan Drake this offseason. Drake will likely eat into Jacobs’ workload, but the split is unclear.

Despite the Drake signing, I believe Jacobs has a very good chance to outperform The Wolf’s RB23 ranking. Jacobs still had a late RB1-level workload in only 62.9% of the snaps in 2020. Backups Devontae Booker and Jalen Richard played almost all of the 37.1% of the snaps when Jacobs was on the bench. Booker is gone, and Drake should take most of Richard’s work.

Jacobs is better than Drake and should still be the starter. He was PFF’s RB21 to Drake’s RB60 last year. Richard was even worse but did not play enough snaps to qualify. If Jacobs could maintain roughly a 60/40 split with Drake next year, his xFP would only fall slightly, and he would be an excellent value at this ranking. In addition, Jacobs scored 2.7 fewer fantasy points per game than expected last season and seems poised for some positive regression in that department. It’s certainly possible that Drake will take more snaps than expected, but the 2020 numbers show Jacobs can still receive heavy volume despite a relatively low snap share.

When Chubb was in the lineup, Kareem Hunt was a serviceable fantasy running back. Of The Wolf’s top-24 running backs, only J.K. Dobbins averaged fewer xFP per game, but Hunt still would have finished on the RB2/RB3 borderline even if Chubb stayed healthy.

Many expected Hunt to explode when Chubb went down, but he failed to deliver elite fantasy results. However, context is important here. One of Hunt’s four games as the primary starter came against the Raiders in Week 8 when the Browns put up six total points due to terrible weather. Hunt played just 53% of the snaps in Week 6, as the Browns put up seven total points in a blowout loss to the Steelers. Even including the Steelers game, Hunt still played a very solid 73.7% of the snaps without Chubb.

Hunt likely would have produced significantly greater than 15.4 xFP per game over this stretch if the Browns didn’t score seven points or fewer in 50% of his starts. Hunt has very limited upside if Chubb stays healthy in 2021 due to lack of volume. But due to the high snap share and poor circumstances in 2020, I still believe in Hunt’s upside if Chubb happens to get injured again.

If you missed them, check out part one and part two where I break down the rest of The Wolf’s top-24 running backs for 2021! If you have any questions or feedback, let me know @RSJ_Jackson on Twitter. You can download the full 2020 Expected Fantasy Points report with all players here, and the Excel file with my adjusted top-24 running back xFP data here.