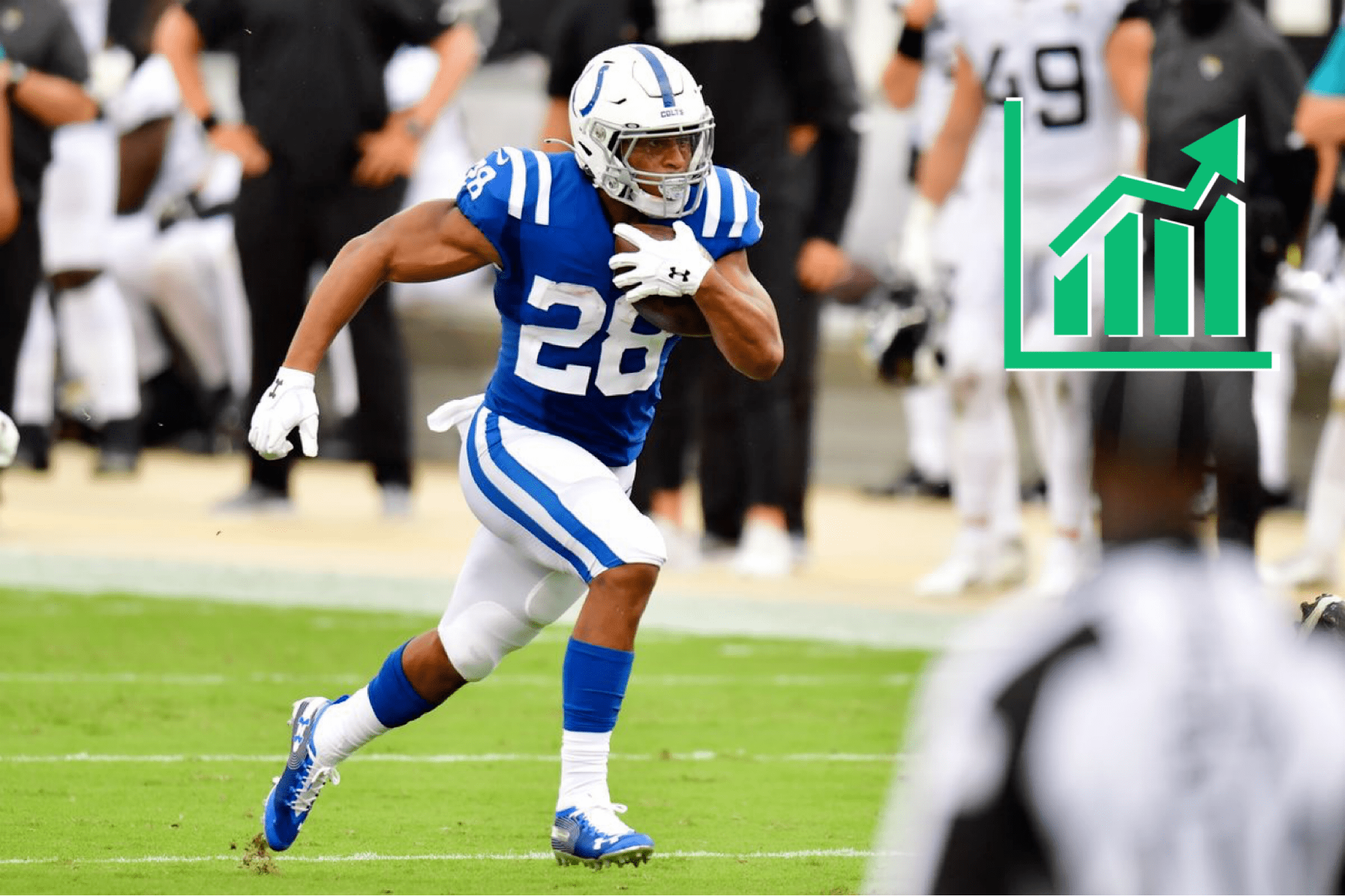 Following Marlon Mack's injury, Jonathan Taylor and his ROS fantasy outlook are shooting to the moon, while Nyheim Hines is a Week 2 waiver wire priority.

The pants are officially off for the Roto Street crew. After declaring Jonathan Taylor the “round 3 steal of 2020 fantasy football drafts,” Taylor owners were granted their wish earlier than expected, after Marlon Mack, unfortunately, tore his Achilles. Once the Achilles tear was confirmed, Colts HC Frank Reich named Taylor the starting running back at a Monday press conference. While Taylor’s fantasy outlook explodes to a bonafide RB1 role, Nyheim Hines will be a priority Week 2 waiver wire add following his two-touchdown performance against the Jaguars.

Jonathan Taylor was moving at a totally different speed than anyone else on the field yesterday. If you drafted him R3-R4, you have a league-winner on your hands — especially with the Mack injury.

“Jonathan (Taylor) will step into the starting role,” Reich said. “He looked good yesterday. Again, I won’t go into it with Marlon (Mack), but such a big loss and so upset for Marlon. But Jonathan is ready. He’ll step up and he’ll do a great job. Nyheim (Hines) is still going to be an important part of the mix – on all downs, not just on third down.”

Buckle up, Taylor owners. You now have an RB1 in your flex spot.

While it took a few more series than most expected, Taylor eventually got his chance in Week 1. The 5-foot-10, 226 lb freight train, who just so happens to run a 4.39 40-yard dash, took advantage of his opportunity right away, but in an unconventional way for the former Badger.

He only ran for 22 yards on nine carries, a measly 2.4 yards per carry, but more impressively, he corralled all six of his targets for 67 yards, highlighted by a 35-yard screen where no defender wanted to get in his way.

Reich talked about Taylor’s freakish size and speed combination, which makes him a nightmare to tackle, especially behind a nasty offensive line that features Quenton Nelson.

Although Taylor didn’t get it going on the ground, it doesn’t seem like Reich is worried. In fact, the head coach said they’re going to focus more on establishing the ground game with Taylor as the bell-cow.

“The great thing with Jonathan (Taylor), unlike a lot of backs who bring that physicality, Jonathan also brings breakaway speed,” Reich said. “What I’m hoping that we see – and this is why we have to continue to call more runs, that I have to continue to call more runs – is that you get a guy who can be a workhorse back like that, and Marlon (Mack) was like this as well.”

“The more times you give it to them, the better they’ll get,” Reich continued. “The more confidence they are going to get. That’s going to be another reason why we have to continue to feed the running game.”

Now that Taylor quickly showed the ability to catch the football in the NFL after grabbing only 42 balls during his three years in Madison, he’s going to be an even scarier weapon who could challenge Clyde Edwards-Helaire as fantasy’s ‘next’ most lethal weapon.

“I just think it’s a mindset that Jonathan (Taylor) has to come in and just take ownership of the position,” Reich said. “We’re still going to rotate guys through, but Jonathan has to be the lead dog and have that mindset and have that confidence. I know he’ll do that.”

It’s no secret Rivers was going to pepper Hines in the passing game. In fact, we said he dripped in “top 15 PPR” fantasy RB upside when Rivers signed on the dotted line. Then there was this tweet from the Sigmund Bloom that highlighted Rivers’ admiration for checking down to his running backs:

Even did it when #1/#2 RBs were Branden Oliver and Donald Brown.

Even with Rivers’ history, we didn’t expect the quarterback to shower the little pipsqueak with eight targets right out of the gate, resulting in a perfect eight receptions for 45 yards and a score. Hines also added a 12-yard touchdown run, which confirmed the Colts’ confidence in the back, while also making Taylor owners roll their eyes into the back of their respective heads.

With Mack no longer around and Taylor owning early-down duties, Hines is a lock for at least 100 targets and 80-plus receptions. Since we actually have a game under our belt in Indy, we no longer need to talk about Rivers’ historical running back obsession. Just in Week 1, the father of 12 targeted Colts’ running backs 17 times in the first game alone, meaning you should be sprinting to your respective waiver wires if you’re in the 80 percent of Yahoo leagues where he’s available.