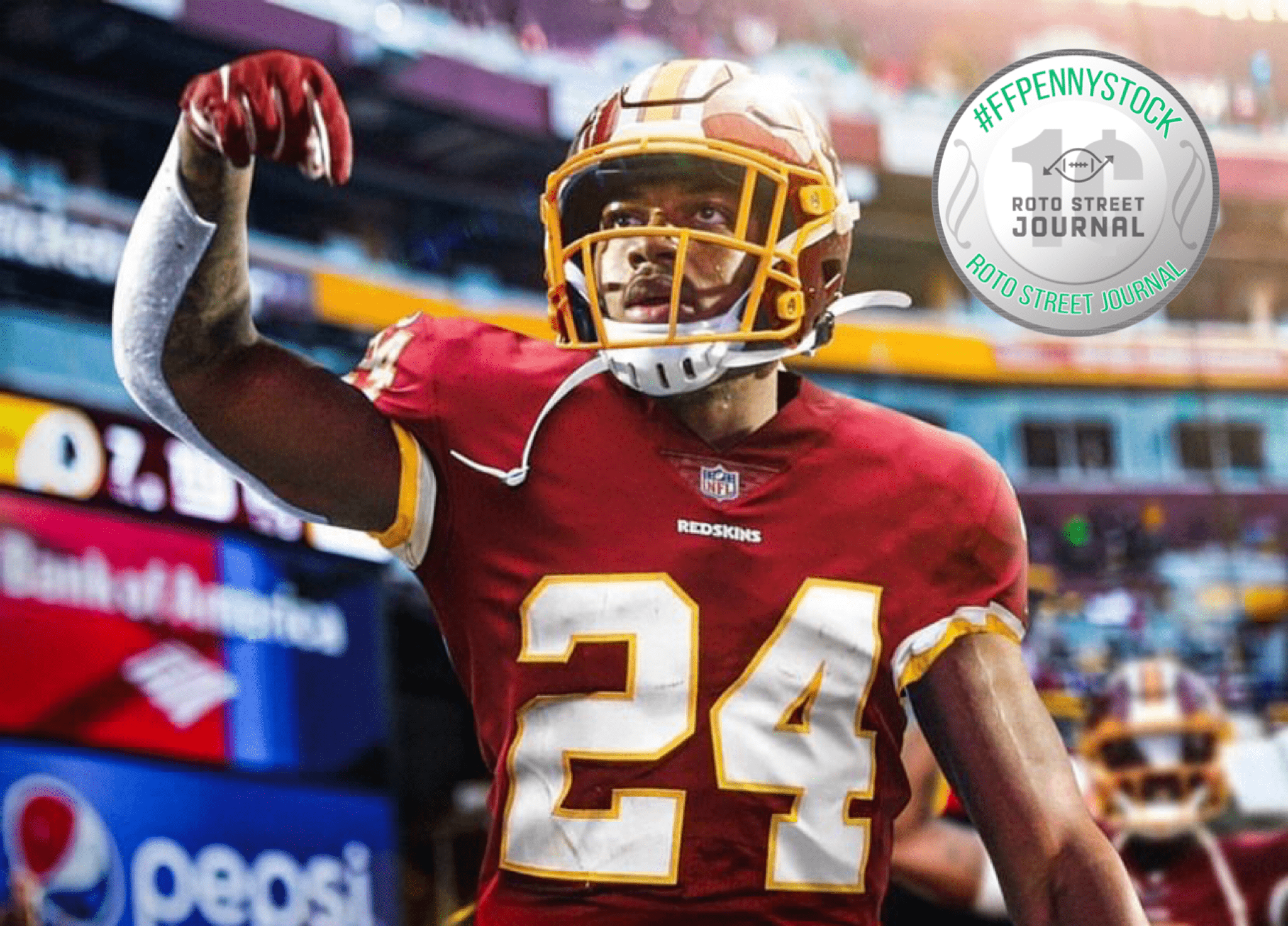 Derrius Guice's release has cleared the path for Antonio Gibson to be fully utilized as a weapon in Washington. His fantasy football sleeper upside in 2020 is huge

In just weeks, his price has shot up from the 13th round, and into the early 9th. Deservedly so.

In terms of talent, Gibson’s raw athleticism is off the charts. He ran a 4.39 at the combine, and in his limited work as a running back, he broke 33 tackles on only 77 career touches.

Currently, in the NFL and fantasy football, RBs who catch balls out of the backfield are at a premium right now. As the great Scott Barrett points out: a target has been worth 2.74 times as much as a carry in PPR leagues

Even though he played mostly WR in college, he’s listed as an RB on both Yahoo and ESPN. Gibson’s practicing and learning under both the RBs and WRs, being prepped for a move-around, “Joker” style role.

In a perfect fantasy world, Gibson is handed the lead back role, akin to a Kamara-lite, and racks up a significant number of receptions to make him a PPR darling.

If Scott Turner carries on his father Norv’s legacy, plenty of RB passing volume will be available:

And it's not just a matter of "Duh, it's Christian McCaffrey"

Even before Christian McCaffrey broke his own reception record under Turner the past two seasons, the old HC had targeted RBs over 32% of the time — a number that’s only risen.

Plus, the Washington Football Team is due for a major step in sheer volume. As RotoViz’s Jack Miller points out:

“Washington is also likely to see a bump in total volume. They ran just 55.3 plays per game in 2019, the fourth-lowest mark over the last 20 seasons. As you can see in the table below, teams that run an abnormally low number of plays per game usually see an increase in the following season. The average increase from the list below was 5.0 plays per game. 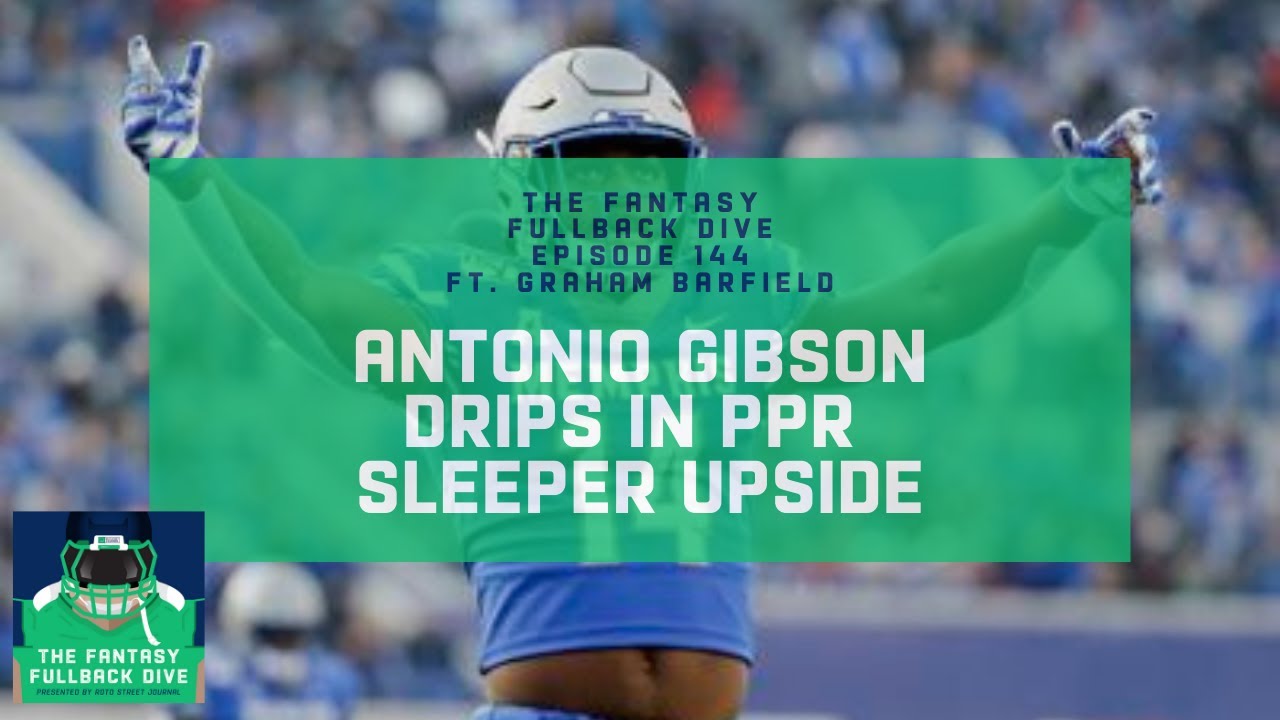 For all his upside, Gibson does come with some risk.

In terms of his opportunity/usage, the current pandemic is not doing any favors for incoming rookies, particularly an RB who never topped 33 carries (despite averaging 11.2 YPC)

Pass protection may be biggest obstacle for Gibson, and rookie RBs in general.DC’s RB coach, Randy Jordan, mentioned, “it’ll take time for Gibson to learn protections and to diagnose blitzes.” The fewer reps Gibson receives in this shortened offseason, the longer his learning curve and lower his early-season usage.

The glaring part of Gibson’s fantasy football stock right now is the risk factor. Taking a college WR/ gadget player and moving him to an NFL running back is a pretty big adjustment in its own right.

What’s tough to swallow, is he’s currently sitting at a 9.01 ADP and will only climb as the team adjusts to life after Guice. He’s currently being drafted right in the area of the better backup RBs like Philip Lindsay, Latavius Murray, and Alexander Mattison.

In that range, eat all day. Gibson’s upside is so sexy — dare we say “league-winning” — if he hits, and you’ll never lose a league in the ninth. Should he takeover and see 10-15 touches per game, it’ll be lights out.

Let’s look at the other “hurdles” in his way.

Father Time Adrian Peterson is still around and had a productive 2019 season, despite the team’s lack of on-field success. Last year, Peterson finished 19th in rushing attempts and 17th in rushing yards, so it’s clear he’s still somewhat getting it done, despite his age. In fact, the year prior, AP ranked 5th in attempts, 8th in rush yards, and RB19 in fantasy. In 2020, he dipped to the RB32 in fantasy… quite “meh,” but still a fair Bye Week flex for the crunch weeks on sheer volume.

If anything, this whole crisis has helped Peterson, according to Coach Jordan, who said that he believes the shortened offseason has helped AP stay fresh for the 2020 season. Despite having a shallow fantasy ceiling, he’s likely to be the Week 1 starter and plodding his way to 10-plus touches per week to begin the year.

Still, our philosophy is always shoot for the moon in the late rounds. Even if Peterson is more “guaranteed” for production over Gibson, we’d aim for Gibson’s upside 10/10 times a week and twice on Sunday.

The team also signed former Tampa Bay Buccaneer, Peyton Barber, this offseason. Just like Peterson, Barber has been an early-down plodder, with little-to-no fantasy sexiness or upside. Barber just happened to be the guy atop the Tampa Bay depth chart, and he would get the ball 8-to-10 times a game and run for about 30 yards.

Somehow, Jordan believes Barber has “every-down ability,” meaning someone either mislabeled the film, or he’s on some strong drugs. Barber and Peterson would share similar roles this year, so having multiple plodders in one backfield is troublesome when trying to figure out and find fantasy value in Washington.

This again helps Gibson in that he’s clearly a different specimen than either of these two, and should carve out a niche regardless. Unless..

Aside from Peterson and Barber, the RB room also includes JD McKissic and Bryce Love.

McKissic has always been buried on the depth chart but made a role for himself in the passing game for both Seattle and Detroit. The biggest concern with McKissic would be if Washington values his experience in the league and initially trusts him more on the field in passing work than Gibson, who has had limited time to incorporate himself with the team.

Love missed all of 2019 with injury but was a big-time star at Stanford before a severe knee injury derailed his career. There’s potential in Love, but at the same time, the team used a third-round pick on Gibson, who is another high-ceiling guy.

It would be shocking to see Washington keep all of these guys on the roster for Week 1, but this crowded backfield puts a dark cloud over Gibson’s rising fantasy stock and ceiling, at least early.

In addition to the aforementioned positive volume regression, the Redskins should be in plenty of “catch up” mode scenarios.

While the offense should take a step forward in 2020, the team is still only projected for five wins on the season. The organization hired Ron Rivera, who was near the top of the league in passing attempts his last two seasons as the head coach in Carolina. Scott Turner was also added as the team’s new offensive coordinator. Turner will implement the Air Coryell offense, and Washington should surpass 500 pass attempts this season.

Turner uses motion to put his star playmakers into mismatches and areas to succeed, and he moved Christian McCaffrey all around the formation and utilized his elite route running to destroy defenses in his limited action as the Panthers play-caller.

“You know, Scott Turner really feels that this is a guy [Gibson] that can come in and be a very versatile player for us,” said Rivera.

The scheme and the lack of overall talent across the board will likely result in positive game scripts for the Washington Football Team, where hopefully Gibson should shine. The second season of talented QB prospect Dwayne Haskins and even the possible return of Alex Smith should provide a big boost to a struggling offense moving forward.

Now, how do we move forward with all of these options when it comes to draft time? Well, Gibson is still the high upside sexy pick sitting around the eighth or ninth round range. He could win leagues if everything falls into place for him, or he could just be a wasted middle-round pick. The upside is worth it even if he falls on his face. Hopefully, as camp progresses, we get more positive updates on him as he looks to solidify a role in the offense.

The value pick from this backfield, however, might be Peterson in the much later rounds, specifically if you need to balance out riskier early round investments with some nice “cushion.” AP had been sitting in the 13-to-14 round range of drafts until the Guice situation, which pushed him up into the 12-to-13 round range of drafts. Peterson has a shallow ceiling, but his floor is somewhat higher than what one would expect from a running back drafted that late.

Likely to start the year as the RB1, he’ll get his touches and can likely operate at the goal line for those easy touchdowns. If you need a little rope to get to the eventual Jonathan Taylor and Clyde Edwards Helaire takeovers, or load up on WRs early, AP could provide a solid buffer.