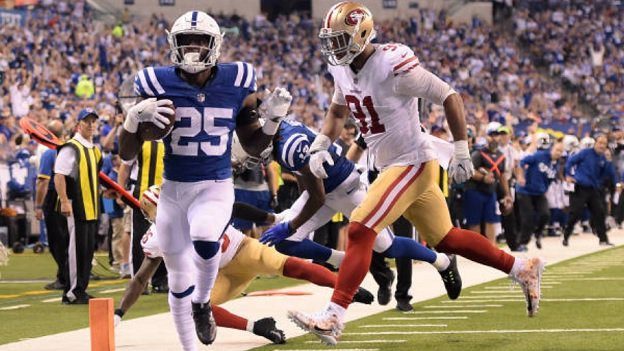 Stash these guys now before they get taken on next week's waiver wire.

The date is September 23, 2017. It was a glowing Saturday afternoon but I’m at work, in a dark room, hovering over a desktop. All of my emails remain neglected. My responsibilities ignored. Instead, I am entranced by my league’s free agent list.

You see, Derek Carr was coming off a three-touchdown performance against the Jets, which gave me confidence in him versus Washington. However, a look ahead revealed a trip to Denver the following week. It’s hard to believe in any quarterback playing the Broncos’ defense.

So as I browse through the available QB’s, I see rookie Deshaun Watson just sitting there. He had performed admirably in his first start, accumulating 67 yards and a touchdown on the ground alone.

I wish I could tell you I picked him up that fateful Saturday. Instead I hung tight with my team as Watson poured 341 total yards and two touchdowns all over the Patriots. Needless to say, my waiver claim was unsuccessful that Wednesday. A less success team had priority over me.

The moral of the story is that good teams can’t rely on waivers. It’s important to look ahead and pick up valuable assets before they’re up for grabs on the waiver wire. To avoid the Wednesday morning blues, take a look at the players it would behoove you to add now, before it’s too late.

A small school darling, Kupp has already exhibited many of the skills that made him a standout at Eastern Washington. The rookie leads his team in targets (30), including a career high nine targets last week against Seattle. Next week he faces the Cardinals, who have surrendered the sixth-most fantasy points to opposing wide receivers (PPR and Standard). With shutdown cornerback, Patrick Peterson, expected to shadow Sammy Watkins, Kupp will be leaned on from the slot. Slot receiver, Nelson Agholor, caught four passes for 93 yards and a touchdown last week against Arizona.

An explosive rookie out of the University of Southern Florida, Mack provides big play ability. In his first game back from injury, he ripped off 91 yards and a touchdown on nine carries against the 49ers. Next week he’ll play a Jacksonville defense that has surrendered the second-most rushing yards in the league (146.4 YPG). Starting running back, Frank Gore, is currently averaging a career-low 3.2 yards per carry this season. In reference to Mack, head coach, Chuck Pagano said, “I think it’d be wise to get him more involved. I think that would’ve happened by itself had he been available the entire time,” according to the Colts’ official website.

I know Taylor isn’t the sexy option. Withhold your judgement until after I tell you about the defense he plays in week seven. The Buccaneers are giving up the second-most passing yards per game (309), the fifth-highest completion percentage (69.5), and the fifth-most fantasy points to opposing quarterbacks. Consume a few stats and suddenly your attraction to Mr. Taylor increases, doesn’t it? This game is in Buffalo, where Taylor has four touchdowns in two games this year, as opposed to two touchdowns in three games on the road. Coming off a bye, Taylor is a viable streaming option you’d be savvy to add now.

Now in his second year with Atlanta, Sanu was seeing seven targets per games before pulling his hamstring in week four. The veteran is yet to return to practice, but is currently listed as questionable for tomorrow’s game versus Miami. He has a much higher chance of returning next week for a trip to New England. The Patriots have allowed the fifth-most fantasy points to opposing receivers in standard leagues, and the fourth-most in PPR. With both teams currently among the top eight in scoring, Sanu should be busy in week seven’s Super Bowl rematch.

Though Tennessee’s defense has been less than inspiring this season, they play the lowly Browns next week. Cleveland leads the league in turnovers (13), and has scored the second-fewest points per game (15.4). With rookie quarterback, DeShone Kizer, struggling, Kevin Hogan will make his first career start. Hogan was a fifth-round pick in 2016.

The Jets have been better than anticipated thus far, and face a drowning Dolphins offense in week seven. In week three New York held Miami to just six points, forcing two turnovers and sacking Cutler on three occasions. The Dolphins have scored the fewest points in the league (10.2 PPG). They have turned the ball over six times and allowed ten sacks in just four games.