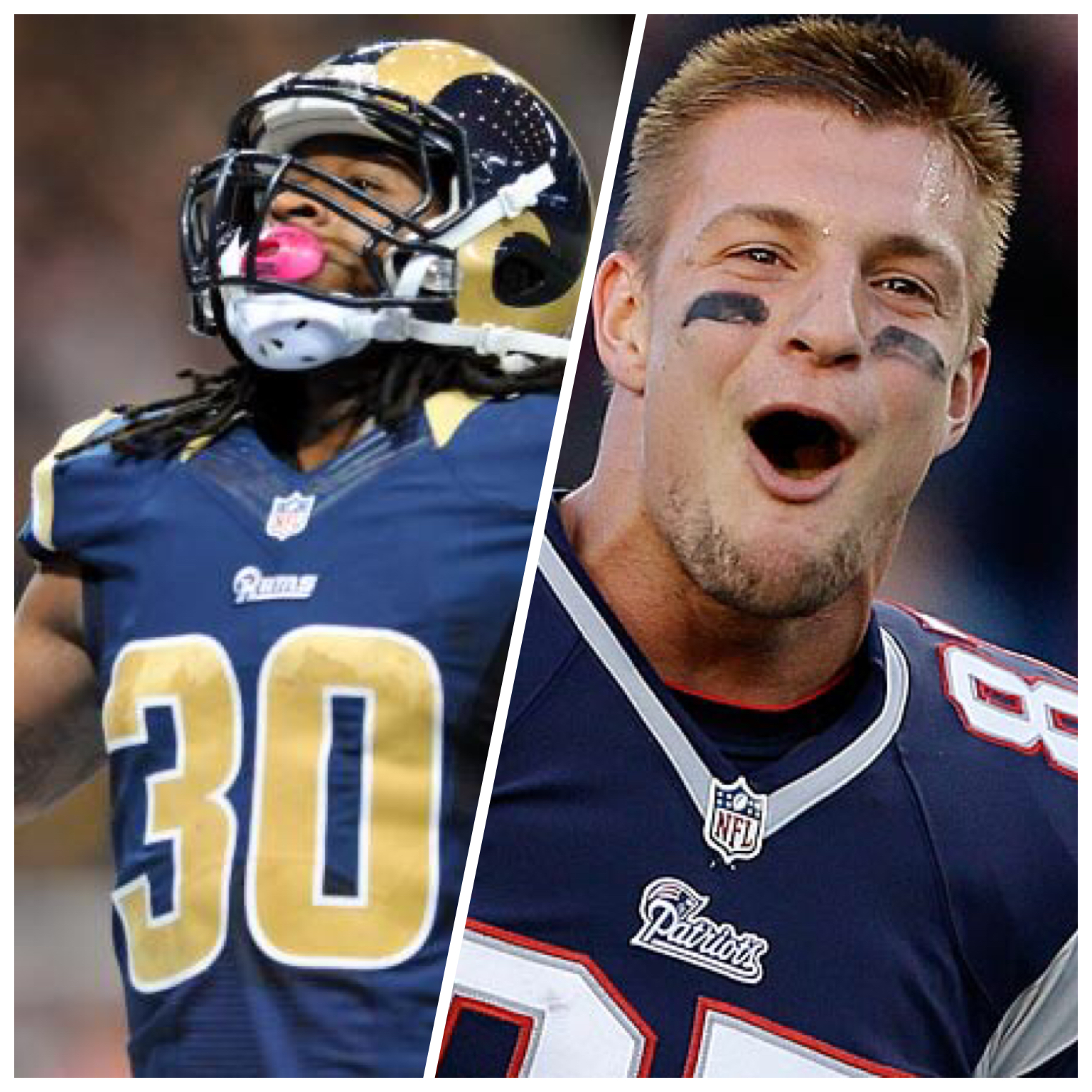 After a brief drinking hiatus, The Wolf is back and as hungover as ever to dive into his Talent Tier 2.5, featuring a debate between who's a better first round pick: Todd Gurley or Rob Gronkowski? Positional landscapes and general draft philosophies ensue.

Previously in Stream of Guts 1 & 2: Sailor J and The Wolf went ham. Wolf laid immobile until 4:11 p.m., Sailor J has not been heard from following his exorcism.

I know my millions of followers have been anxiously awaiting the Stream of Gut’s return, and my deepest apologies to keep you this long. It’s been quite the 4-day bender, including a fantastic beer deleting session with Old School’s James Carville. I’m just trying to make sure my hangover is ripe enough for SoG Level legitimacy. It’s all for you, readers.

After a thirsty weekend capped off with marathon Monday yesterday, it’s safe to say a Paul Bunyan sized axe has been driven into my skull. I also am on School Vacation, so there’s a good chance this battle weapon is never dislodged, thus allowing me to keep the SoG content pouring out this week. Make sure to be following us on Facebook and Insta (@therotostreetjournal) so you keep up-to-date with all the latest fantasy happenings.

This hangover’s so brutal, in fact, that I found it necessary to capture the nightmarish essence through a video. I’ll leave it there and get to The Gut:

This choice is not an easy one. My internal debating seemed to reveal some valuable draft philosophy + positional analysis, however, so let’s dive in:

Gronk is absolutely in a class of his own among tight ends. He’s perhaps the most imposing talent to ever play the position, and consistently delivers elite fantasy stats when healthy. He’s even better when Edelman, and ideally Lewis, are fully healthy and the offense is really clicking, as no connection is more dangerous in the redzone than Brady to Gronk. With the Patriots new offensive weapons in Martellus and Chris Hogan, we might see even more trips inside the 20s during 2016. The 3-TD, week winning performances belong almost exclusively to Gronk, and these could happen more often this season.

Yet, Gurley similarly belongs to perhaps an even rarer class in this passing-based, committee-plagued era: the elite, consistent Running Back.

Similar to Gronk, Gurley presents a generational, dominant talent; he looks ready to steal the top rusher crown from AP sooner than later. Todd’s position, however, is even more starved for quality options because of 2 reasons that play off one another:

You likely need to start minimum 2 RBs versus 1 tight end, making solid RB depth more imperative but also more difficult to acquire; at least 24 RBs will be entering lineups versus 12 for tight end, which thins the position out much quicker than at TE. This is emphasized even further by Reason #2…

In season’s past, Gronk was so valuable because no other tight end could match his ceiling or consistency. This offered a tremendous weekly edge and made Gronk well-worth an early first round investment.

The times, however, have changed. As more and more talent has been flushed into the position and coaches continue to figure out more creative ways for using the big-bodied athleticism, the depth for fantasy tight ends has increased tremendously.

As such, there’s now proven talents available in the middle rounds (I’m guessing at the price, as I still have held strong and avoided ADP data so far) with ceilings close to Gronkian levels. There’s also a bevy of late-round options that look primed for an Eifert-sequel leap in 2016.

Let’s start with the tight ends who’ve already arrived and lessened Gronk’s gap ahead of the field.

Think too of how cheap 3 out of 4 of the above options were in drafts last year — outside of Olsen, all carried double-digit price tags, and some even went undrafted. Stockpiling talent and depth at the skill positions, and then landing one or two of these guys was a common ingredient for 2015 fantasy title runs.

This season, there’s at least 10 other guys who’ll likely come at a low price and can have a Reed type of impact: Ertz, Barnidge, Orange Julius, Fleener, Dwayne Allen, A.Gates, Ladarius G, ASFJ, Martellus in the Navy and Red intrigues me, maybe even Ebron with Calvin gone, Jordan Cameron has some potential with Gase…that’s 15-16 potential starters right there for 12 starting spots. Snag 2-3 in rounds 9-12, and you’ll likely find a rotation that offers strong value more weeks than not. Contrastingly, the success rate of hitting a valuable 8th-12th round RB are very , very low.

Essentially, the same principles that drive JJ Zachariason’s successful Late Round QB Theory (link) similarly drive my approach to tight ends — positional demands are low and the number of quality options are (fairly) high, and most importantly, often cheap.

And then we get to RB landscape, which is the exact opposite.

Besides these guys, the aforementioned D.Johnson + L.Bell, and Adrian Peterson (turning 30…), who else are you confident in as an RB1?

Sure, Thomas Rawls could become the next Beast Mode. The thought of a P-90x-shredded Eddie Lacy makes me stiff. Carlos Hyde could emerge as a high volume asset in Kelly’s scheme. Maybe Ajayi will dodge all these trade attempts by his team and be a true 3-down workhorse. Perhaps the Abdullah Express will take off with Joique’s uselessness gone.

But in reality, there’s only 5-6 options that I’d feel confident rolling out at a position that again requires 24 starters. The supply and demand difference between tight end and runners is massive.

So when you have a chance to get the best pure runner in the NFL, you take him. Gurley’s size, speed, power is unmatched right now. Like a younger AP, Todd can plow through defenders, and when he finds the space, forget about it. He picks up steam as he rolls, and his long speed, vision, and ability to cut vertically to the open grass makes him a threat to score every time he breaks free. Gurley is especially dangerous around the stripe; get him within the 10 yard line, and you’re likely to see 6 points added to your fantasy score.


Scary to think he was coming off an ACL surgery and displayed all these talents. We might see an even stronger, faster Gurley in 2016.

The only unestablished piece of his game at the NFL level is his receiving ability. This is why a generational talent like Gurley could fall this low in PPR based rankings — his ceiling is just slightly lower than the players ranked above him without this point source.

This doesn’t mean he’s incapable as a receiver, however. Gurley showed serviceable hands and was plenty useful on typical screens and flare routes. He’s got the size and strength for pass protection, and generally had sound blocking technique in 2015 when asked.

He’s simply not schemed this way yet

If reports emerge that Fisher was simply moving him along slowly, and Gurley will be “unleashed more” with 3rd down work added to his plate, he could leap all the way up to #2 in these rankings.

Update – With the Rams trading up and a lock for a QB Upgrade, Gurley receives a Surrounding Talent score boost. No, Wentz or Goff don’t need to be elite, they just don’t have to be Nick Foles or Case Keenum and Gurley will see more scoring chances and wider rushing lanes.

On his rushing ability alone, and the points it’ll provide at such a thin position, Gurley gets the nod over Gronk. In addition to securing a top-flight option at RB, you’re simultaneously starting to build the depth bank. This is crucial for those brutal, bye-week fuckfest match ups, as rolling out 2 quality RB options against the team tossing out Tolbert in hopes of a TD plunge is a massive edge.

This bye week grind is where teams separate into two types:

2) The clawing-in type forced to go after “Win-Now” fantasy talent.

Unless you’re a Nardella Brother fighting for a fez. I guess this would be the time of season that sinking feeling drops anchor in Sailor J and he realizes he’s missing the playoffs for an 8th straight season.

Having quality depth at the multi-starter positions is crucial for emerging at the top of this pack. Starting with Gurley, the NFL’s premier young rushing talent, is as strong as a building block as you can find. I love Gronk, love the ferocious “I’m-a-man-you’re-a-boy” style of play. Love the ceiling he rolls out above all other tight ends. But a shrinking RB talent pool, and a growing TE one, have me siding with Todd.