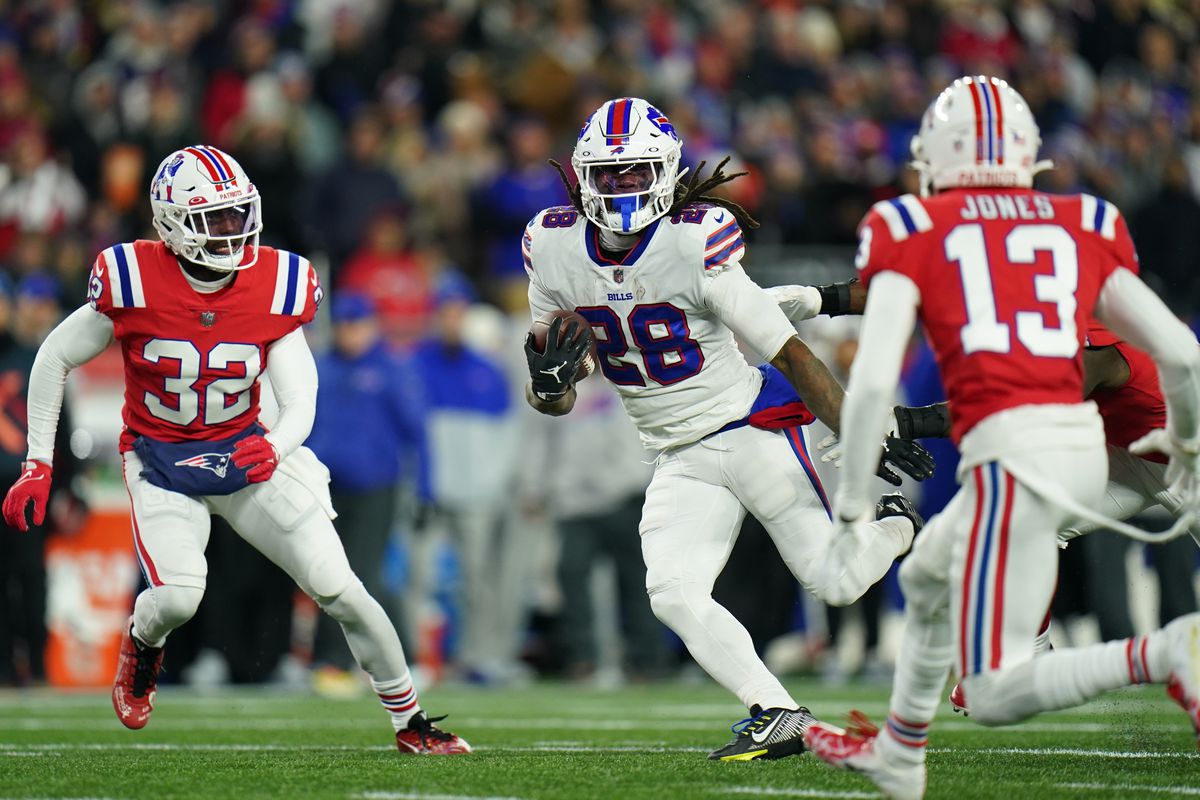 Welcome to the fantasy football Week 14 waiver wire pickups where we give you the players to start right away, stash at the end of your bench, or stream for a week or two.

Let’s look back at Week 13 and dissect the future prospects for the Week 14 waiver wire.

Note: Roster % based on Yahoo leagues and should hover around 50% or less

If he wasn’t already scooped up in your league, go grab Zonovan Knight right now. The Jets’ new lead back has a strong grasp on the RB1 role after finishing with 47 snaps to Ty Johnson’s 28 in Week 13. He turned that into 90 yards on 15 carries and caught five balls for 28 yards. That’s great usage from someone who’s still available in over half of leagues this late into the season.

While the Broncos’ offense has been historically bad, the silver lining has been rookie tight end Greg Dulcich. With a 6-85 line on eight targets, Dulcich is commanding a significant target share alongside Courtland Sutton and Jerry Jeudy. The rookie ran a route on 81% of dropbacks and played over 70 snaps last week. It’s tough to trust Russ, but Dulcich is a more than capable starting fantasy tight end.

I had fully written him off, but apparently, Cam Akers has decided to become fantasy relevant once again. Releasing Darrel Henderson was a big-time move that opened up a chunk of touches in the Rams backfield and Akers got the nod over Kyren Williams last week. Now with the Rams’ season over while they ride their two shitty backup quarterbacks, the team might as well see what they have in Akers and hopefully knock some rust off in the process. He toted the rock 17 times for 60 yards and two scores against the Seahawks and hopefully he can continue that for the remainder of the season.

Down in the dumps after losing Lamar Jackson for an unknown period of time? Well, Jared Goff is out there in half of leagues and he could be a serviceable plugin moving forward. Goff gets the Vikings, Jets, Panthers, and Bears to finish off the fantasy season. The Lions are all of a sudden getting healthy on offense and Goff could have a solid fantasy finish after scoring over 20 points in back-to-back games.

Bills rookie RB James Cook set a season-high in snap percentage with 43%, which isn’t great but is still a potential sign of things to come in Buffalo. Even with the recent trade to acquire Nyheim Hines, Cook carried the ball 14 times for 64 yards while adding six catches for 41 yards. He looked very elusive and every bit of the second-round pick that he was billed as. While Devin Singletary still looms, he hasn’t been consistent or dynamic enough for this high-powered offense. Cook drips in major rest of season upside.

It’s not sexy, but the guy has been getting it done. Nico Collins had the added benefit of no Brandin Cooks this week, turning that into 3-35-1 on 10 targets. The touchdown really saved the day, but the target share is what sticks out here. He’s been trending up over the last month and is slowly supplanting Cooks as the Texans’ go-to receiver.

What a game from Michael Gallup against the Colts this week. He went 4-23-2 on seven targets and the Cowboys’ offense is humming like no other right now under Dak Prescott. With Gallup finding the end zone twice, he seems to be shaking off the rust. If he can Prescott can get back on the same page, he can make some serious noise as the team’s WR2. With the Texans and Jaguars up next, Gallup could continue feasting against weaker defenses. He’s not the worst streamer if you need one this week.

Jameson Williams made his NFL debut last week and only saw one target on the day. While that was disappointing, he might have the most lethal straight-line speed in the league and he could add another wrinkle to an ascending Lions’ offense. The rookie may not do anything, but he’s good for fantasy locker room morale, and who wouldn’t want this type of talent at the end of their bench?

A slight dip in his numbers from the prior week, but Isaiah McKenzie still turned in a 5-44 line against the Patriots. He’s still operating as the WR3, but McKenzie has outproduced Gabe Davis in terms of volume recently. A slot WR3 on another team wouldn’t be as valuable, but sometimes you just need a piece of this elite offense.

Jahan Dotson saw his snap share jump above 75% for the first time since Week 3 and he delivered. Dotson is running as the WR2 behind Terry McLaurin and provides another player-maker for Taylor Heinicke in the Commanders’ offense. The nine targets were a season-high, so hopefully, this usage keeps up and the shifty rookie can make an impact moving forward.

While the Ravens’ offense had a tough day with the loss of Lamar Jackson, Demarcus Robinson managed to catch seven balls for 41 yards on eight targets. The yardage leaves room for improvement, but the volume and target share was pretty good. The Ravens are lacking quality pass-catchers and Robinson could be that guy.

Lamar Jackson looks like he probably won’t go in Week 14, meaning it’s the Tyler Huntley show against the Steelers. While Huntley isn’t likely to put up quality passing numbers, his legs can actually make him fantasy relevant as he punched in a score against the Broncos in Week 13.

The Titans have a home matchup against the Jaguars this week. Trevor Lawrence has looked better (and survived an injury scare), but that doesn’t mean all is fixed for Jacksonville’s offense.

Targeting some backup QBs here, the Raiders have a Thursday night matchup against either John Wolford or Bryce Perkins for a Rams team that has all but given up on the 2022 season.