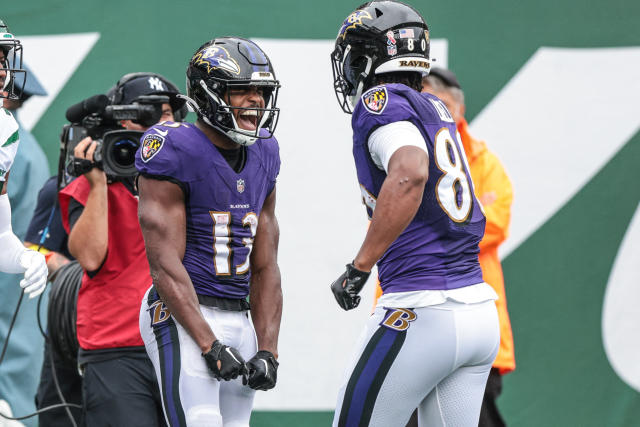 A role that Sammy Watkins had held so well, a fantasy catfish reel you in with an impressive Week 1 performance and beautiful profile pictures, only for those profile pics to turn out to be someone completely different.

Devin Duvernay caught a pair of touchdowns against the Jets, with 54 total receiving yards. Despite his nice finish as PPR’s WR9 for the week, his touchdowns were exactly half of his targets (four). That type of production is impossible to sustain on that many targets.

Perhaps he’ll average more targets for the season, but even Duvernay’s status as the Ravens’ WR2 isn’t affording him optimal field exposure so far. His 52% snap count percentage against the Jets narrowly beat out Demarcus Robinson‘s 44%.

History is not on the side of the Ravens for having fantasy-relevant second receivers. The last time that happened, was Mike Wallace in 2016. In fact, the track record is arguably worse for Ravens’ primary receivers, considering how often even they could not crack WR3 status:

The lack of Ravens’ receiving production isn’t limited to the Lamar Jackson era. So don’t give them too much credit. The Jets’ defense may be on the rise during their rebuild and had a good draft this past offseason, but they haven’t proven to be a formidable foe yet.

Baltimore’s Week 2 matchup against the Dolphins should be a tougher defensive matchup and a better judge of Duvernay’s efficiency.

If Devin’s going to fill the void left by Marquise Brown‘s departure, he might need consecutive flawless performances to avenge Miami’s 22-10 upset of the Ravens last season.