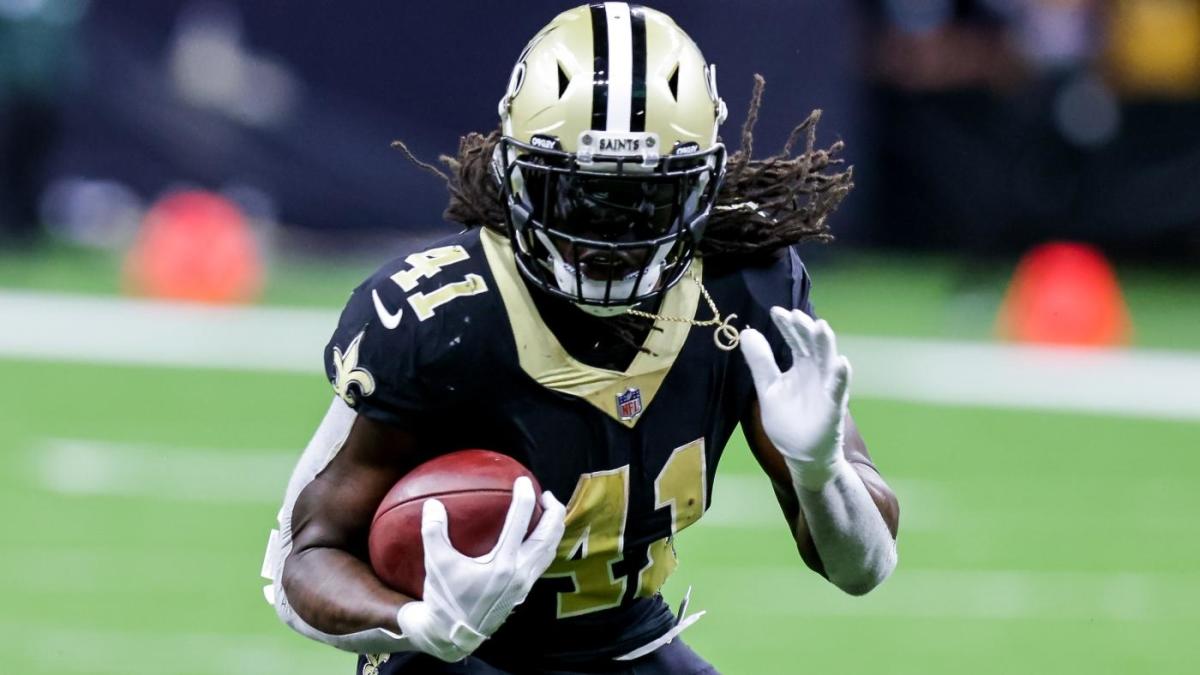 Leaguemates tend to overreact after Week 1.

If you read any of my fantasy football buy-low, sell-high articles from last year, you know that I love high-volume, high-upside fantasy players. However, raw targets and carries are only part of the equation.

The less obvious part is determining exactly how much more valuable one play is than the next. Fortunately, we can quantify the exact value of each opportunity using my Expected Fantasy Points model.

I built the model based on a metric called Expected Fantasy Points (xFP). A player’s xFP is calculated based on the value of each target or carry, using historical data attributes that correlate highly with actual fantasy points scored. All data in this article uses full PPR scoring.

HOW TO INTERPRET EXPECTED FANTASY POINTS

We would expect the most talented players in the NFL to score more fantasy points than their expected fantasy points. That’s pretty obvious since xFP is based on the averages of all players. Also, a given coach or scheme might lead to a sustainable difference in actual versus expected points. A carry in Kyle Shanahan’s offense will typically produce more points than a carry in Matt Patricia’s offense. A carry behind an elite offensive line would be more valuable than a poor one.

After calculating actual and expected points for every play, I simply match each play with the relevant player to generate the output. Roughly the top 190 players for Week 1 are included.

You can find the data below, or download the Excel file here:

During the season, the main purpose of using my Expected Fantasy Points model is to help you win trades. Remember, we want to buy players who are getting unlucky, and sell players who are getting lucky. Here’s a more general overview of my trading strategy. In addition, I posted a trade value chart on Tuesday with values for every player.

You should look at the data and come to your own conclusions, but several guys jump out to me.

Fantasy managers shouldn’t panic over Kamara’s subpar Week 1 performance. It turns out the running back was battling a rib injury during the game, which appeared to decrease his workload. On Tuesday, head coach Dennis Allen said that he believes Kamara will be fine.

Kamara was drafted as a discount due to a potential suspension for an alleged assault during Pro Bowl weekend last season. However, Adam Schefter is reporting that it is “more and more unlikely” that he will be suspended in 2022. Attorney Drew Davenport, the best fantasy football legal analyst in the business, agrees.

Kamara should be on the field in 2022, and when he is on the field, he is fantastic. His 20.4 XFP per game trailed only McCaffrey and Henry last year. An improved Saints offense could lead to more scoring opportunities for Kamara this year, and he has still produced elite numbers with Jameis Winston at quarterback.

Cooks is an extremely solid option at receiver. He averaged 15.8 XFP per game last season, which was good for WR15. He secured 130 targets over his 15 healthy games, yielding an elite 26.7% target share across those games.

He picked up right where he left off in Week 1, gobbling up 12 of his team’s 37 targets (32.4%). Cooks was undervalued in most drafts this season, and his relatively modest 15.2 points in Week 1 likely didn’t do much to change your league mates’ perception of him.

Cooks is a target monster, and the Texans still have nobody else on the roster to compete with him. If he simply repeats last year’s numbers in a very similar situation, he will be a high-end WR2 in PPR. In addition, quarterback Davis Mills could take a step forward in his sophomore season and elevate Cooks to WR1 status. Mills looked solid in Week 1, completing 23 of his 37 passes for 240 yards, two touchdowns, and no interceptions. He earned PFF’s 11th-highest QB grade of the week.

The logic for buying Diontae is extremely similar to the Cooks. Both are proven target hogs (29% last year for Diontae) facing similar competition for targets this season, and both were undervalued in drafts. Coincidentally, both had 12 targets in Week 1, and very similar Week 1 target shares as Diontae saw 12 of 38 targets (31.6%).

A player of Johnson’s caliber never should have been going in the late fourth round of drafts. He trailed only Cooper Kupp, Davante Adams, and Calvin Ridley in XFP per game last season. If you missed out on Johnson in your draft, now is the time to acquire him coming off a dominant performance in the target department, but mediocre on the fantasy scoreboard. The fantasy points will follow this elite volume.

If you like receivers who dominate targets and make catches like this, trade for Diontae this week.

At first glance, Patterson’s Week 1 numbers look fantastic. He saw true bell-cow usage and dominated the rushing attempts and targets out of the backfield. However, this usage is unlikely to continue.

The Falcons planned to use Damien Williams along with Patterson to take the majority of the backfield touches. Williams suffered an injury and was knocked out of the game, leaving the Falcons with only two available running backs – Patterson and Avery Williams.

Avery Williams is listed at 5’9″ 195 pounds and is primarily a special teams player. In fact, he was drafted as a cornerback two years ago and only transitioned to running back this offseason. The Falcons only trusted Avery Williams to handle two carries, and he likely was never supposed to play offense at all without a Damien Williams injury.

Damien Williams is expected to be back for Week 2, and the Falcons also have rookie Tyler Allgeier if needed. He was a healthy scratch in Week 1.

According to PFF’s Nathan Jahnke, “[Damien] Williams lined up in the backfield seven times while Patterson did so twice in addition to the Falcons using an empty backfield once over the first 10 plays.”

Look for Patterson’s usage to crater in Week 2 when the Falcons have more healthy alternatives and sell this week if you can.

Don’t be fooled by CEH’s 22.4 fantasy points in Week 1. He was able to convert two short targets into scores near the goal line, but he still didn’t see the volume necessary to put up points on a consistent basis.

Edwards-Helaire only played 27 snaps out of a possible 70. To be fair, the Chiefs turned to rookie Isiah Pacheco in the fourth quarter when the game was out of reach, but CEH still only saw 48% of the snaps through the first three quarters. Still, you would prefer your fantasy running back to be fed carries in a blowout win, especially when the Chiefs project to have several more blowout wins this season.

Touchdowns won’t always save him in the future if Edwards-Helaire continues to see mediocre volume on limited snaps. If you can wait a few weeks for production, I like the idea of moving Patterson or Edwards-Helaire for Chris Godwin.