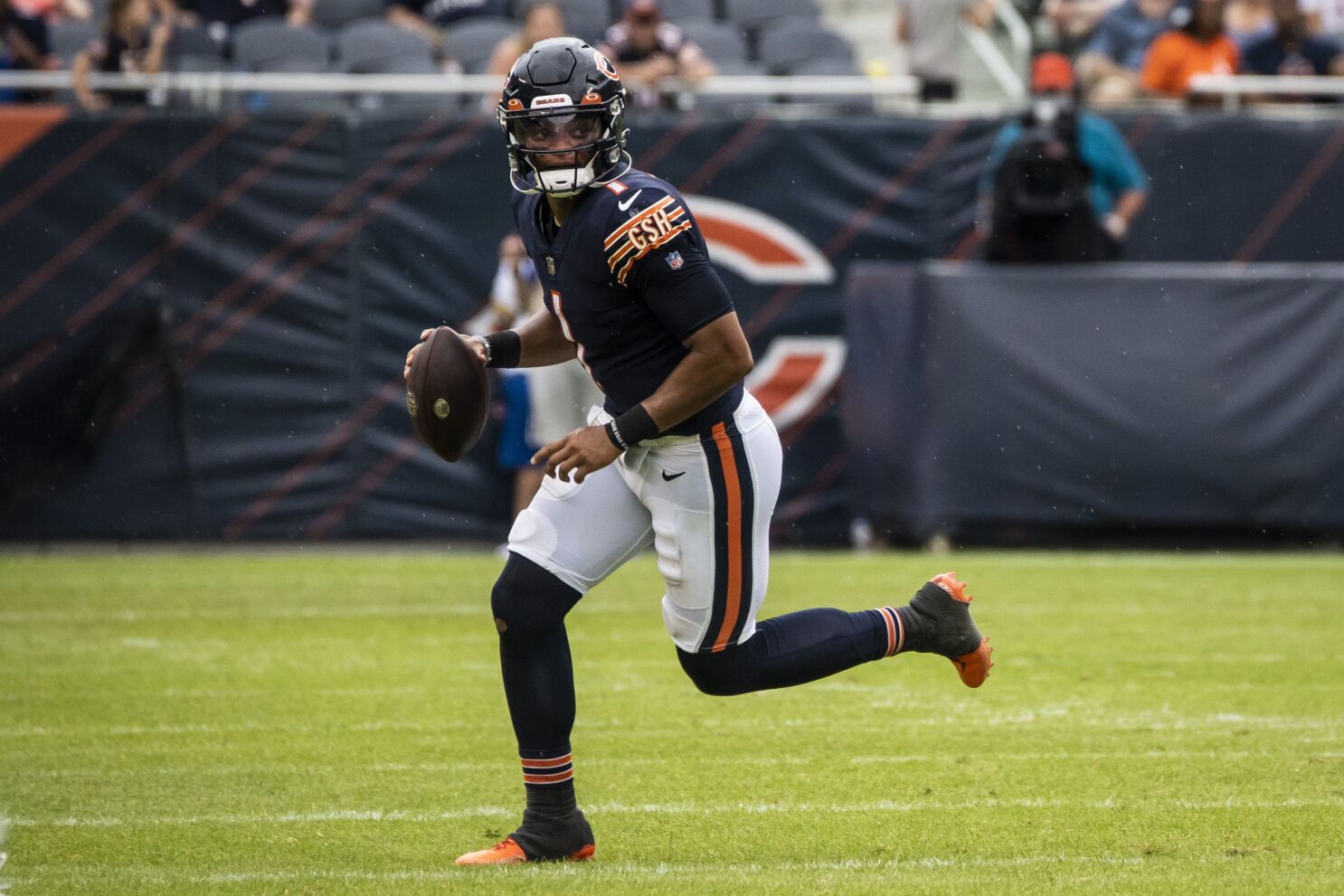 These player props will help you build your stack towards a large wad of cash.

Following a 4/5 showing on Thursday Night Football, we’re back to hand out more free money over at No House Advantage. NHA’s app allows the user to stack or choose over/under player prop bets to win cold hard cash. Our NFL Week 1 player props below will help users build a winning stack to win up to $250K in their Pick ‘Em contest or win up to 20X per entry Vs. The House.

Let’s put our player prop knowledge to the test and kick off the 2022 NFL season during an electric Week 1 slate.

Justin Fields finally has full reign of the Bears offense. His perimeter weapons outside of Darnell Mooney are horrific and his offensive line ranks at the bottom of the NFL, meaning, he’ll likely be running for his life on Sunday to move the chains and make plays.

When Fields played last season, he rushed for 420 yards on 72 attempts and averaged 35 rushing yards per game. He also eclipsed this number in six of the last seven games he played. I don’t like saying anything is a lock… but, this is a lock.

By all accounts, Jalen Hurts and AJ Brown have formed a quick and electrifying connection in Philly. Whether it was Eagles corners during camp or joint practices, Brown has made plays. They’ll work him in the short and intermediate game early to rack up receptions and boost their rapport, and then go deep to test the Lions’ secondary. Plus, Brown will get a heavy dose of former first-round CB Jeff Okudah, who’s coming off an Achilles injury. The 70.5 receiving yards is a bit high for my liking, so hit the over 4.5 receptions here.

This line is a touchdown too low. A healthy Jameis Winston gets the leaky Falcons defense in Week 1 and he will have one of the league’s most terrifying surrounding casts to make their lives miserable. Michael Thomas, Alvin Kamara, Chris Olave, and Jarvis Landry will make plays after the catch and make life easy for the veteran gunslinger. Winston will throw three touchdowns m-i-n-i-m-u-m in Atlanta.

KYLE PITTS OVER 54.5 RECEIVING YARDS AND OVER 4.5 RECEPTIONS

Both of these are like stealing candy from a baby. With Drake London questionable to play Week 1, Kyle Pitts is the Falcons’ only true receiving threat. Sure, the Saints could try to lock up Pitts with Marshon Lattimore, but Pitts would hold a considerable size advantage over the corner, as he would with safety Tyrann Mathieu too. In his last matchup against New Orleans, Pitts secured three of seven targets for 62 yards. I’d lean the receptions if I had to pick one, but I have full confidence in both hitting the over here.

The last time we watched the Patriots’ defense, it looked very old and very slow against the Buffalo Bills. In fact, the Bills didn’t punt once against Bill Belichick’s defense. Fast forward to 2022 Week 1. The Patriots got a little faster in the front seven, but huge question marks remain.

From Chase Edmonds’ point of view, he should be able to do work against the Patriots’ inexperienced linebackers if Tua Tagovailoa can decipher the correct mismatches. Belichick tends to do a good job of taking away Tyreek Hill on the perimeter, which should leave Edmonds underneath to cook. He could realistically hit the over on two receptions.

If JK Dobbins is in the Week 1 lineup, this will fly under with ease. The Ravens added Mike Davis and Kenyan Drake for backfield insurance and it appears John Harbaugh will ease Dobbins into action once he’s activated. I can’t see him playing more than 10 snaps if he’s on the field against the Jets.

If Dobbins is inactive and you want to play another under, look at Miles Sanders under 65.5 rushing yards. He’s coming off a horrific preseason where he was in and out of practice and will share a backfield with Kenneth Gainwell and Boston Scott. Under. Under. Under.