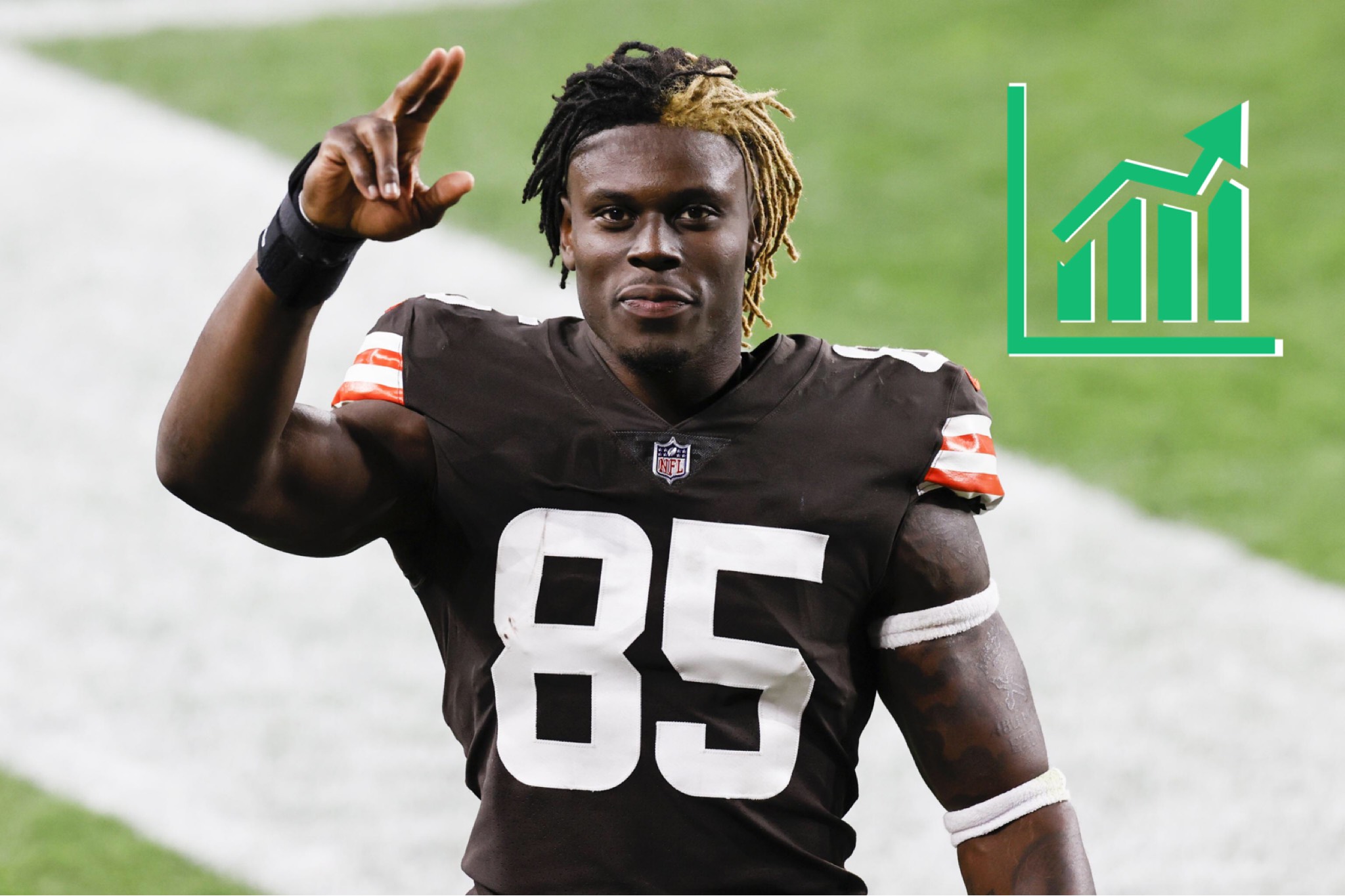 David Njoku could be a weekly starter on fantasy squads this season.

It’s been a tumultuous offseason for the Cleveland Browns, primarily concerning QB/Serial Creep Deshaun Watson and the NFL’s confusing and drawn-out process of determining his punishment. It appears the dust has settled on this punishment, at least for now, and the final verdict is an 11 game suspension for the three-time Pro Bowler.

Jacoby Brissett is slated to handle starting QB duties in Watson’s absence, which has understandably lowered the fantasy value of many of Cleveland’s pass catchers.

One such pass catcher is tight end David Njoku, who inked a 4-year, $56.75 million extension in May and assumed the undisputed TE1 role after Austin Hooper left for Tennessee in free agency. Njoku has taken nearly all first-team reps throughout the preseason, and seems poised to play a significant role in Cleveland’s offense this season.

Many are disregarding these developments because of Cleveland’s quarterback situation, but doing so is ignoring the facts and missing out on a potential Top 10 TE that you can nab as late as the 13th round based on his current ADP.

As mentioned, many fantasy drafters have been hesitant to pull the trigger on guys like Amari Cooper and Kareem Hunt due to Watson’s upcoming suspension. And while that makes perfect sense, I don’t believe Njoku should be lumped in with that group based on his new quarterback’s tendencies. Brissett loves to target his tight ends and has for some time now. As the full-time starter for Indianapolis in 2019, Brissett targeted tight ends on 29% of his pass attempts. Jack Doyle was the TE15 in PPR leagues that year, and Njoku has much more talent than Doyle.

Brissett’s tenure in Miami was no different, aside from sample size. In four Brissett starts last year, Mike Gesicki averaged 7.8 targets per game, with no less than seven in any single contest. When Tua Tagovailoa started, Gesicki averaged just 4.8 targets per game. Over the course of Brissett’s career, he’s been one of the most TE-happy QBs in football, and I see no reason for that to change now in Cleveland.

Njoku’s best season as a pro was 2018, with a mix of Tyrod Taylor and Baker Mayfield at quarterback. He finished that year as the TE9 with 88 targets, 56 receptions, 639 yards, and four TDs.

Since 2018, he’s struggled to make a similar impact, whether due to injury or a lack of opportunity once Hooper came to Cleveland. But the Browns just made a massive investment in Njoku, making him the fifth-highest paid tight end in football, so clearly, he’ll get his chance to redeem himself.

Njoku has not only played the majority of first-team snaps this summer but has also been moving all around the field.

With his size and athleticism, Njoku could be a matchup nightmare for opposing defenses, lining up all over the place and toasting LBs that are too slow or DBs that are too small. Especially in the red zone, where most tight ends make their living, Njoku should be a huge focal point for Cleveland, and I project him to blow past his previous career-high of four scores in a season.

The Wolf has Njoku as his TE24, and he’s a potential steal at his current ADP of 158. It may be too much of a risk to put all of your TE eggs in the Njoku basket, but he is a legit potential TE1 at an ADP typically reserved for third down RBs and QB2s. Take a shot at Njoku in the late rounds and thank me later.