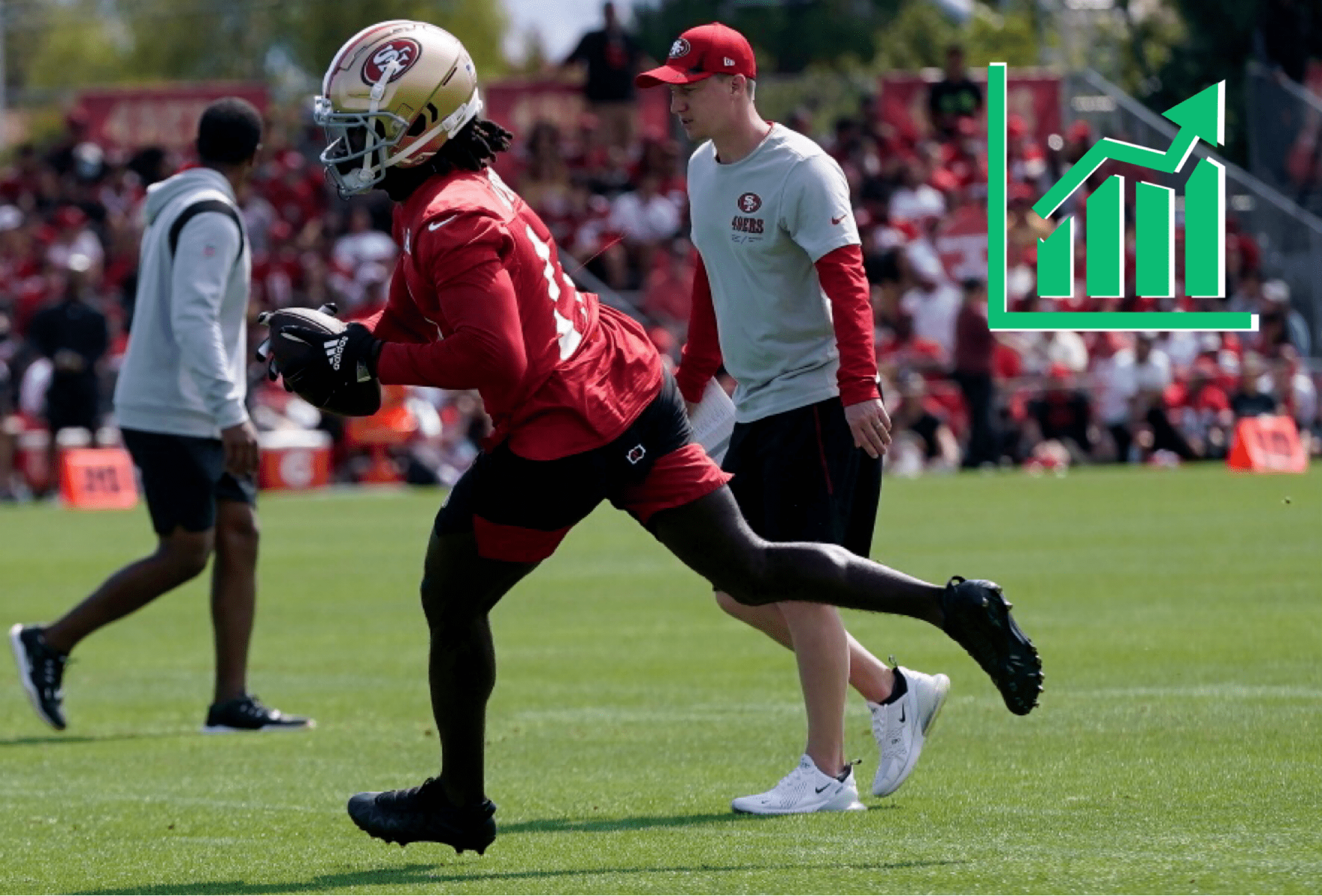 Brandon Aiyuk is poised for a massive third season.

Brandon Aiyuk has been the star of 49ers camp thus far with second-year quarterback Trey Lance behind center. Reports out of 49ers camp have been nothing but positive on the Lance to Aiyuk connection with the two connecting on multiple highlight-reel plays in practice.

Not only has Aiyuk established himself between the whistles, but he proved he has that dog in him when he challenged All-Pro psycho linebacker Fred Warner to two fights in a single practice. Warner and safety Jimmy Ward said they’ve been on Aiyuk during camp because they want to get the best out of the talented receiver.

After an underwhelming sophomore season, can Aiyuk unleash his true potential this season after starting the 2021 season in the doghouse? Let’s take a look.

Aiyuk boomed during the second game of his rookie season, posting 21.3 PPR points against the Giants, and never looked back. In just 12 games, Aiyuk ranked 18th in fantasy PPR points per game, and ranked second in PFF grade amongst rookie wide receivers.

What stands out most about Aiyuk’s rookie season is that he performed at this level with Nick Mullens, and C.J. Beathard throwing him the ball for over half the season. Aiyuk ended his rookie season with an impressive 24.2 percent target share, with 60 receptions for 748 yards and seven total touchdowns.

During Aiyuk’s sophomore season, he started the year in Kyle Shanahan’s doghouse, recording just nine receptions through the first seven weeks. Following a strong week of practice, Aiyuk scored 10.5 PPR fantasy points and didn’t look back for the rest of the season. From Week 7 on, Aiyuk exited the doghouse and finished as the WR16 overall with a 21.1 percent target share.

With Lance running the offense there will be many questions about the 49ers’ offense. Historically, Kyle Shanahan is known for his zone blocking scheme and running back excellence. However, Lance showed his arm talent and athleticism in limited action last season. If Aiyuk can avoid the doghouse and perform as he has in the second half of each season, he is dripping in mid-tier WR2 potential. Aiyuk should be viewed as a WR3/Flex with WR2 upside.

Along with the connection to Lance, Aiyuk has received praise from Shanahan.

“Everyone knows how it started off last year.” said Shanahan, “He was a little bit behind where I wanted him. He accepted the challenge and handled it like a man and got so much better.”

With the continued growth between Lance and Aiyuk, the sky is the limit for this duo. Aiyuk sits at WR47 (-8 vs ECR) and 98 overall on The Wolf’s 2022 Fantasy Rankings. Aiyuk’s ADP is 86.40 on Underdog Fantasy and is a great mid-round best ball steal.

Take advantage of Aiyuk’s ADP in Underdog Fantasy. Download the Underdog Fantasy app, use promo code RSJ or click the link, get a 100% first deposit match up to $100, and dominate their season-long best ball tournaments.