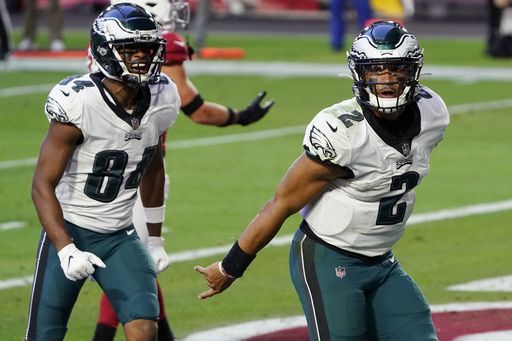 Stream that remaining hole in your lineup or block your opponent. Either way, take home the trophy with our Week 16 Waiver Wire adds.

Welcome to the Fantasy Football Week 16 Waiver Wire: Start, Stash, Stream, where we generally breakdown the fantasy free agent landscape and give you the best picks for the short and long haul.

However, with Week 16 the Fantasy Championship is among us so there’s really no sense to stash guys with it being the last week. Also keep in mind, just because you don’t need someone or don’t see yourself actually playing a guy on this list over your starters, you could block your opponent and play defense by preventing them from using one of these guys. So without further ado, we’ll just have one grouping of waiver adds.

Let’s look back at Week 15 and see our future prospects for the Fantasy Football Week 16 Waiver Wire.

Note: Ownership % based on Yahoo and must be under 50% owned

Jalen Hurts exploded in Week 15 after we featured him in our Week 15 Waiver Wire piece. Yet, he’s still available in over 60 percent of leagues. Hurts was unleashed in Philly’s offense as he went toe-to-toe with Kyler Murray all game long. Hurts finished with 338 passing yards with 3 touchdowns before even getting to the 11-63-1 rushing line on the day. Hurts has Konami cheat code ability, and this week gets the charitable Cowboys defense. Fire up Hurts as your QB unless you have someone like Mahomes.

With Ezekiel Elliott out, Tony Pollard got RB1 duties and played 52 of 58 snaps for Dallas. Pollard finished with 12-69-2 on the ground and 6-63 through the air on 9 targets. He’s a workhorse back when Zeke is out, and would be another great play if Elliott misses another week. But if Zeke is expected to return, then don’t bother with Pollard.

The Dolphins bullied the Patriots front seven this past Sunday with Salvon Ahmed leading the way carrying the ball 23 times for 122 yards and a score. Miami has been a run first team and with Myles Gaskin sidelined, Ahmed has stepped up to be the lead back for the Dolphins. Miami has a short turnaround with Saturday’s game in Las Vegas, and that is a very favorable matchup for Ahmed and Miami as they fight to secure a playoff spot.

James Robinson went down with an ankle injury that should keep him out of Week 16. This leaves Dare Ogunbowale as the RB1 in Jacksonville for Week 16. If you are desperate after losing Robinson, Clyde Edwards-Helaire, or Cam Akers, then Ogunbowale could be your saving grace at the RB position.

As Julio Jones remains sidelined, Russell Gage has thrived alongside Calvin Ridley. Gage sported a 5-68-1 line on 10 targets this week and gets the Chiefs next week, meaning the Falcons should be playing from behind and throwing the ball. Gage has double-digit fantasy points in three straight games now.

The Browns are quietly sneaking up on the Steelers for tops in the AFC North and Baker Mayfield has been a big reason for their success. Nearly 20-plus points in four straight, Mayfield has been on fire and gets the Jets up next. Hard to find a better matchup for a team still in the hunt.

After a 4-49-1 game for Darnell Mooney, his ceiling could be super high next week against the Jags. Jacksonville has slotted themselves into Trevor Lawrence and the No. 1 pick, meaning they have no reason to put up a fight here. Not to mention their defense is horrible. Mooney is a great deep threat if you need a Hail Mary at WR this week.

He had a quiet game against the Giants, but Rashard Higgins has been playing very nicely as the WR2 in Cleveland. Higgins had over 15 points in both Weeks 13 and 14 and gets the Jets for Week 16.

After a measly Week 15 going for 5-56 on 6 targets, the matchup is ripe for Allen Lazard and the Packers passing game against the Titans. Lazard played a much bigger role than MVS and any other Packers receiver not named Davante Adams. Could be an emergency WR3 if needed given the upcoming scenario.

If tight end is a position of need for you, then Irv Smith Jr. and Austin Hooper are two decent options. Coming off a 13 pt effort in Week 14, Smith let a ball go through his hands which would have saved his day. But if Kyle Rudolph Misses another week, then Smith is a viable option against a Saints team that’s let up six touchdowns to the position. Coming off a 5-41-1 game against the Giants, Hooper is another option. He was a big part of the Browns passing attack and gets the Jets this week.

Which defense would I target off the waiver wire for the finals if I don’t have a good matchup already? The Washington Football Team DST plays Week 16 against the Panthers. This would likely get downgraded if Christian McCaffrey ends up returning this week, but if not, then I love this defense. Its front seven is ferocious and they’re fighting for their playoff lives at home.

In that same game, Carolina Panthers DST likely gets Dwayne Haskins (or Alex Smith) and the Redskins, an offense that’s only generated 24 points over its last two games. The Panthers limited Aaron Rodgers and Green Bay to under 300 yards of total offense and got to the quarterback five times last Saturday — a mark they’ve achieved for the second time in the last four games.