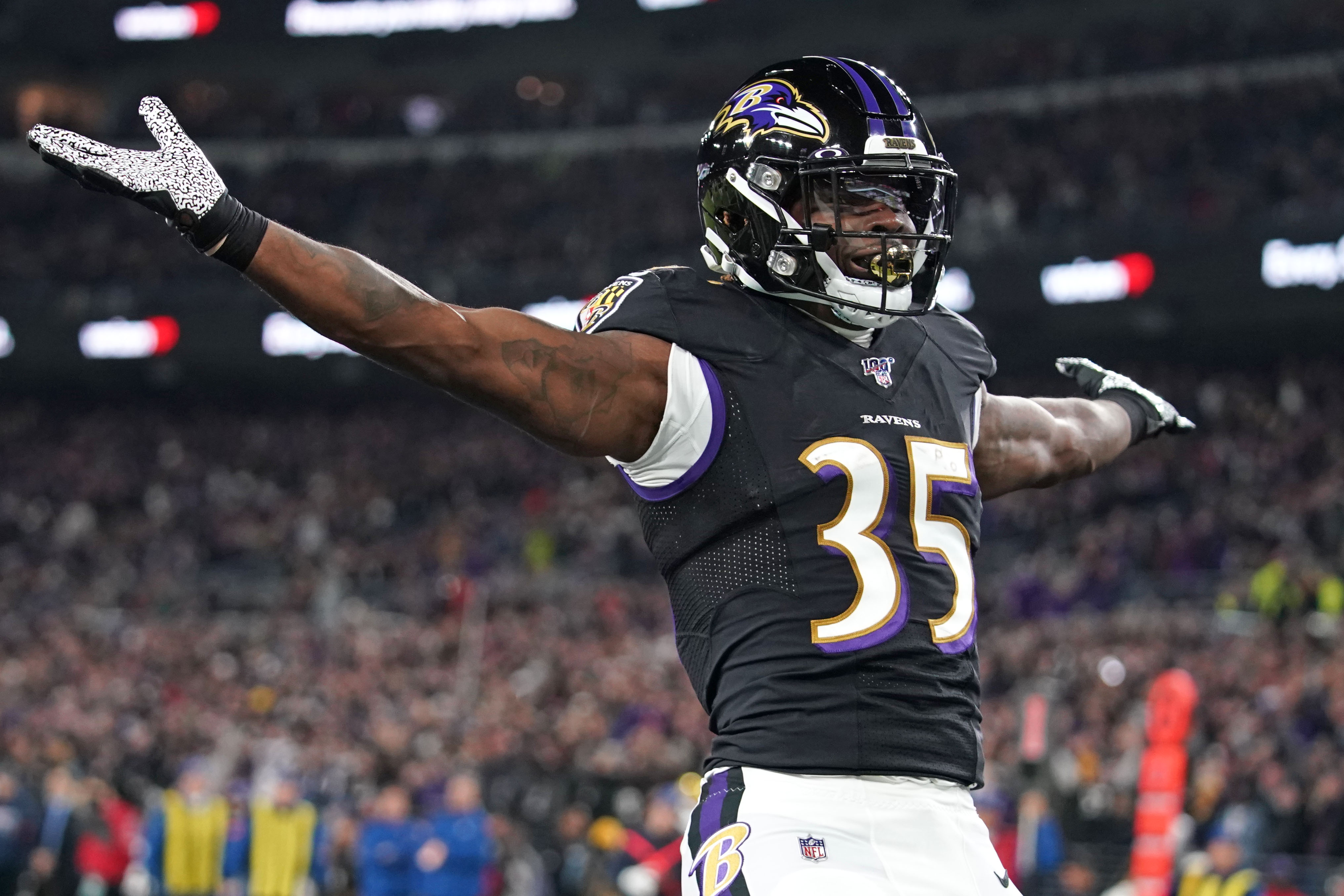 Welcome to the Fantasy Football Week 12 Waiver Wire: Start, Stash, Stream, where we breakdown the fantasy free agent landscape and give you the best picks for the short and long haul.

We have our three groups of ‘starts’ ‘stashes’, and ‘streams.’ The starts can be inserted into your lineup immediately, the stash guys add depth to the end of your bench and can provide longer-term benefits, and the streamers are generally D/ST’s and QBs that are matchup dependent. 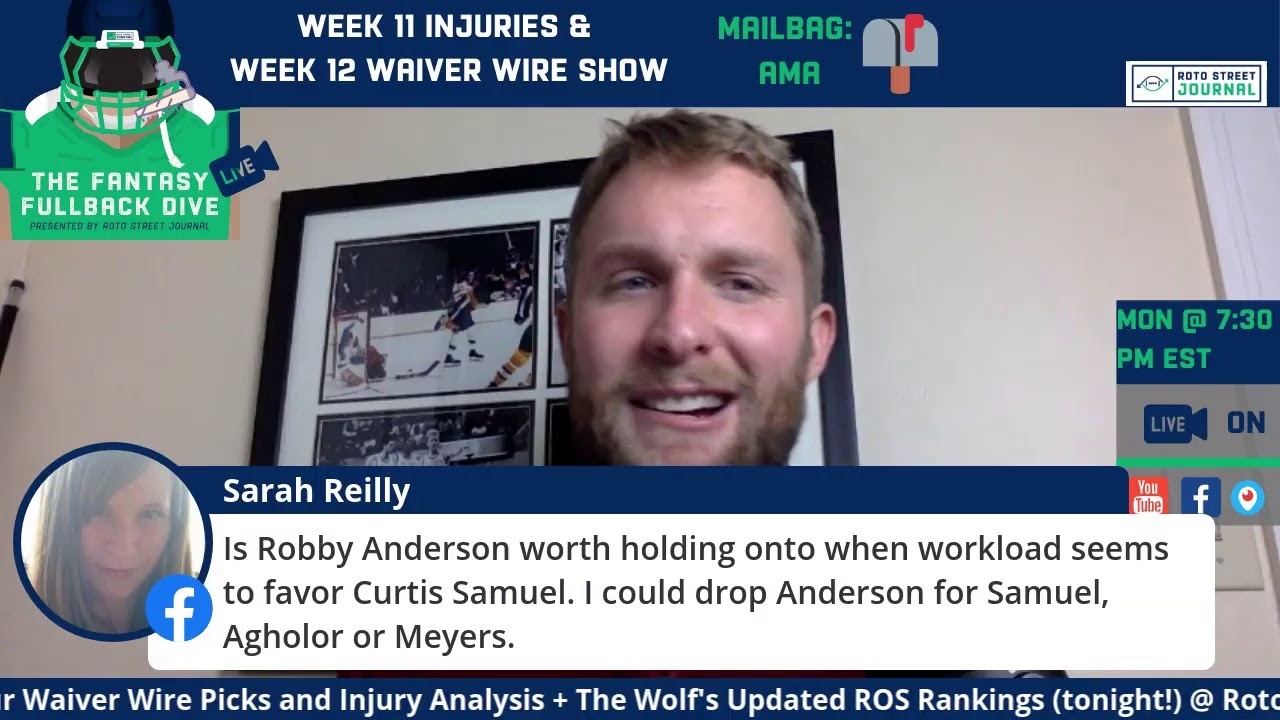 Let’s look back at Week 11 and see our future prospects for the Fantasy Football Week 12 Waiver Wire.

Note: Ownership % based on Yahoo and must be under 50% owned

With both Mark Ingram and JK Dobbins testing positive for COVID-19, both are ruled out for the Thanksgiving game against the Steelers. Gus Edwards will have free reign of the backfield which is a great start, but few teams have been able to run successfully against this very good Steelers defense. However, Edwards had some Week 8 success against the Steelers, when he averaged 5.4 yards per carry and found the end zone.

Michael Pittman saw limited action this week against Green Bay, but the rookie made the most of his touches going for 3-66-1. He’s become the WR1 for the Colts, and faces the Titans defense once again after going for 7-101 on 8 targets just a week ago.

The Giants and Sterling Shepard return from the bye week and gets a cake schedule in front of them. With six-plus receptions in his last four games since returning from injury, Danny Dimes and Shepard look to take advantage of a schedule that sees the Bengals, Seahawks, and Cardinals in their next three. Shep is a solid flex option from here on out.

As one expected, Taysom Hill had Konami code upside as the Saints Week 11 starter. While he was rather average in the passing game, his usage as a runner, especially at the goal line, made him incredibly valuable in his first career start. If you’re on ESPN and he’s still listed as a QB/TE, then congrats, you are very much in luck. But for those at Yahoo with his QB designation, that rushing upside makes him playable for the foreseeable future until Brees returns.

Derek Carr has weirdly been targeting just the duo of Darren Waller and Nelson Agholor. Agholor has been a touchdown machine, scoring once again versus the Chiefs on Sunday Night. He’s been a consistent deep-ball threat for Carr, and gets some JUICY matchups on deck with the Falcons and Jets up next.

He just recently crossed back under the threshold for this article, but Robert Tonyan re-established himself in Green Bay’s offense with a 5-44-1 line against the Colts. Rodgers and the Packers have a high scoring offense, and Tonyan remains in the upper tier of Rodgers’ targets and receiving options.

As we get closer to the season’s end, stashing handcuffs become even more important. Alexander Mattison lands up top here based on Dalvin Cook’s injury history and we saw him get ROCKED on a play against the Cowboys that left him on the turf for a good minute. If you own Cook, you should already have him by now, but if not and you have an extra spot on your bench, give him an add.

The same goes for Tony Pollard who I personally think is more talented and would be better than Mattison if both were put into RB1 roles. The path for Pollard though is far less likely as Zeke rarely gets hurt or misses games. Another stash if you have the open bench spot.

He’s been pretty non-existent this year, but the injury to Rex Burkhead could be huge for James White moving forward. Damien Harris is clearly the guy when New England has a lead and can just run the ball. But when playing from behind, they don’t use Harris and rely on the combo of White and Burkhead. With Rex out of the picture, White finished with 6-64 on 9 targets. With Arizona up next, New England may not be able to run as much as they’d like to, meaning more snaps for White in the passing game.

It took 11 weeks, but Cam Akers finally notched his first career NFL touchdown. His carries dropped a bit this week after leading the team in Week 10 (of course), but with Darrell Henderson and Malcolm Brown flattening out, Akers could get a shot during the stretch run. The Rams get a favorable schedule with the 49ers, Cardinals, Patriots, and Jets to wrap up the season.

Tim Patrick continues to fit the bill of a relatively high floor with a very capped ceiling. The 8 to 11 point range is his wheelhouse as he finished with 5-119 on 8 targets this week, leading Denver in all three categories. While Jeudy is the clear WR1 in Denver, Patrick still has his role as WR2 with big play upside.

After Jakobi Meyers got all the attention over the last few weeks in New England, Damiere Byrd had a monster game against the Texans finishing with 6-132-1 on 7 targets. With 16 targets over his last two games, Byrd has benefitted from the newfound attention on Meyers in recent games. The Patriots could once again find themselves in catch-up mode against the Cardinals this week.

The return of Andy Dalton really helped the Cowboys offense get back under control. Dalton Schultz scored the game-winning touchdown and finished with 4-25-1 on 6 targets. His target numbers have actually been solid over the past couple of weeks, although he’s still the third option at best behind Cooper and Lamb.

It looked like the writing was on the wall for Sony Michel, as he was a healthy scratch this week coming off IR. However, with Burkhead done for the season and Harris running about as physical as a running back can, Michel could see some time before his time is up in New England. Maybe Michel could put something together if given the chance, but it’s tough to be optimistic at this point.

Greg Olsen went down with a season-ending injury for Seattle. This puts Jacob Hollister into the presumed TE1 spot, and Hollister had brief flashes last year down the stretch where he was putting up great numbers. The Seahawks have thrown the ball a lot, and while it often goes to Metcalf and Lockett, Hollister can pick up targets left behind by Olsen moving forward.

Make it two games in a row now with a deep score for Breshad Perriman as he finished with 2-54-1 on 4 targets. He’s a big body with some favorable upcoming games against Miami, Las Vegas, and Seattle.

Ol’ reliable Larry Fitzgerald has been manning the slot for Arizona and totaled 10 targets last week against Seattle. New England had trouble covering the middle of the field against the Texans, and if Gilmore follows Hopkins around in shadow coverage then it puts more emphasis on Kirk and Fitzgerald to play larger roles.

The production isn’t there, but the looks are there. In four games this year, Denzel Mims has seen 7, 3, 8, and 8 targets, eclipsing over 40 yards in all of them too. While the looks are there, he’s yet to explode from a fantasy standpoint. The rookie has potential, and if Flacco can connect with Mims on a more consistent basis then he’d easily be fantasy relevant. Like we said for Perriman, his upcoming schedule is quite nice.

Derek Carr looked fantastic against the Chiefs throwing for three touchdowns in a losing effort. With Atlanta on deck, Carr should look for another solid outing against a weaker secondary.

He’s starting to run more which is great for his fantasy output, meaning Daniel Jones is in consideration this week facing the Bengals defense. He certainly has the receiving weapons around him, and hopefully he can stay upright this time if he breaks off a long run.

The Giants travel to Cincinnati this week which would have been tough until Joe Burrow went down with a horrible injury. It will be Ryan Finley under center, which is salivating for an up and coming defense like the Giants.

A divisional matchup here for the Packers who welcome the Bears and their anemic offense to Lambeau. Chicago has been a dumpster fire on the offensive side of the ball, and Green Bay has dominated these matchups over these past handful of years.