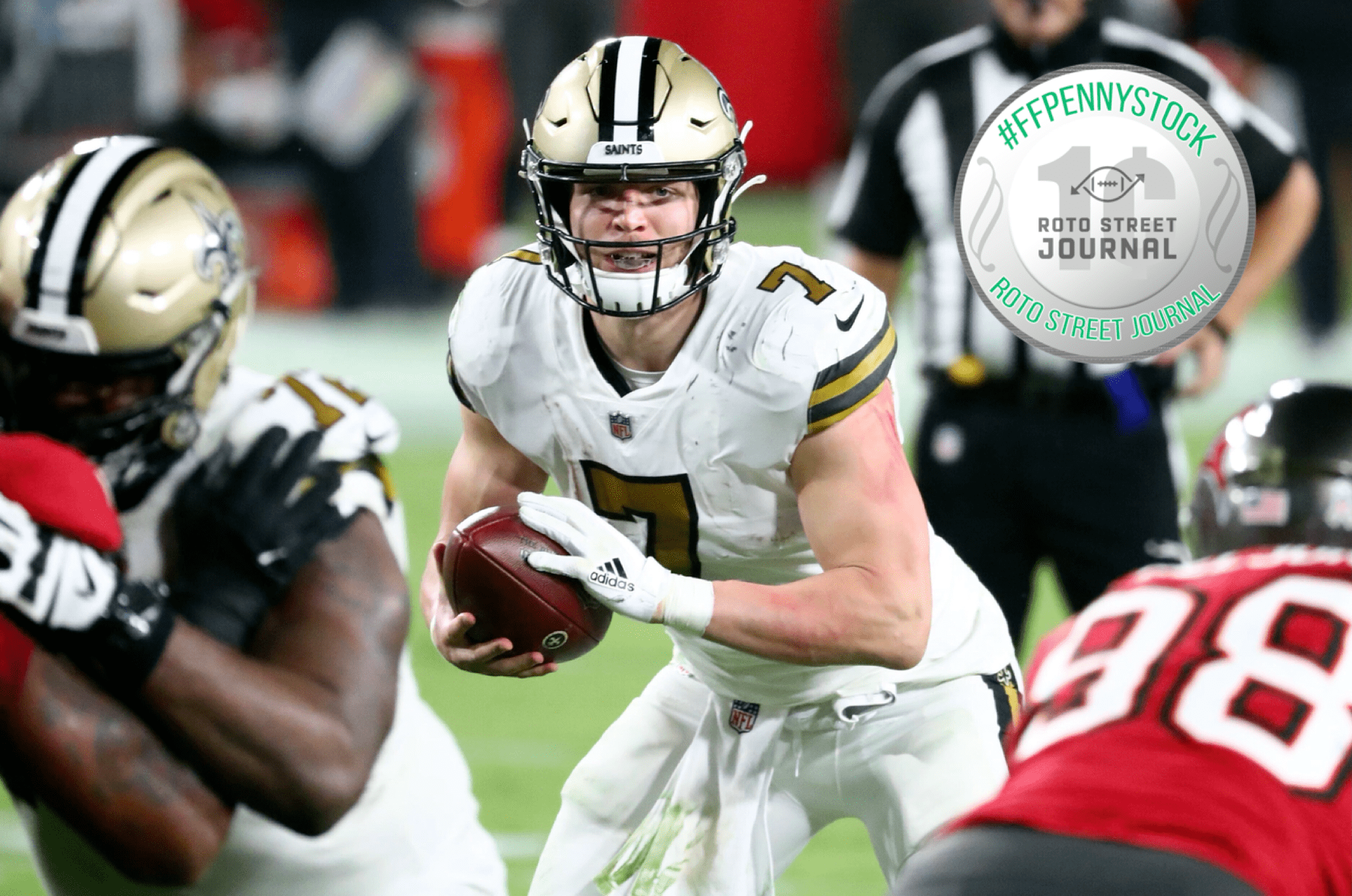 Should we really be surprised? Learn more about Taysom Hill's fantasy outlook as the Saints starting quarterback and why he's an ESPN fantasy cheat code.

Much to Sean Payton’s arousal, he will be turning to QB/ TE/ Punt Protector/ Gunner Taysom Hill, as his Week 11 starting quarterback and future placeholder until Drew Brees returns from his broken ribs and collapsed lung.

Although gunslingin’ Jameis Winston took over when Brees exited Week 10, multiple reports said only Hill took first-team reps during practice this week. Furthermore, Winston will not even be included in any offensive packages this week. So, what’s Taysom Hill’s fantasy outlook for a player with 20 career pass attempts and a handful of limitations? It might be better than one would think.

Let’s get this out of the way first. If you play ESPN Fantasy, Hill still carries a QB/TE designation, which makes him the ultimate fantasy cheat code. The same can be said for his TE designation on FanDuel this week. Right now, The Wolf has Hill ranked as his No. 2 Week 11 tight end behind only Travis Kelce. If you’re one of the 26 percent of ESPN owners (UH, PICK HIM UP!) who roster Hill, plug him in, take the shit from your leaguemates, and watch the points pile up on Sunday. 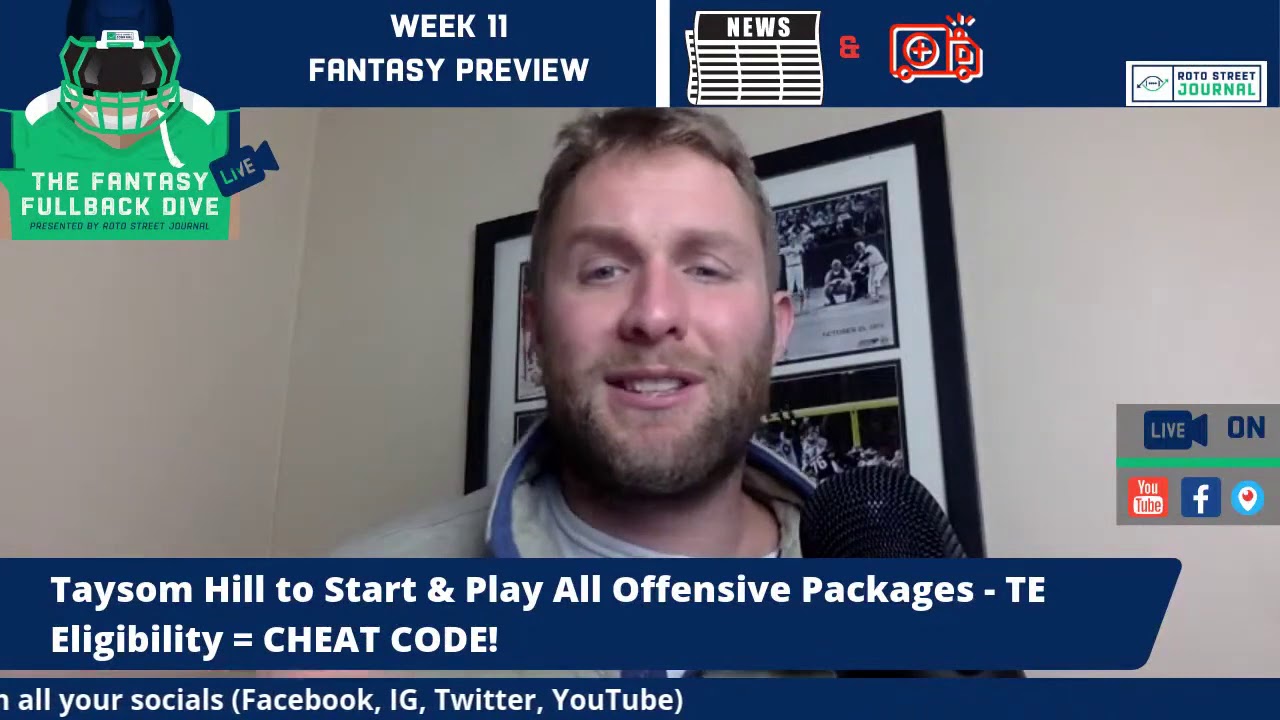 What to Expect Out of Taysom Hill, the QB

Is there anything worse than watching Brees orchestrate a drive down the field, just to watch No. 7 sprint in, line up in shotgun, and Brees’ geriatric body jog out-wide as a receiver?

To answer my own question… no, there isn’t.

Does Hill have provocative photos of Payton? Did he walk in on him cheating on his wife? We’ll never know. But, Louis Riddick said he understands Payton’s affinity for Hill. “It’s consistent. He doesn’t waver.”

As the team’s starter, Payton has to maintain some sort of balance in this offense for them to succeed.

According to Larry Holder of The Athletic, Hill has dropped back to throw 31 times since 2018 and attempted only 20 passes. On the other hand, he’s caught 20 passes and rushed the ball over 100 times.

If you want some NFL breakdown of his regular season throws, that’ll be tough. But, we can always count on the guys at Pro Football Focus to give us his 2019 preseason stats and grades, which weren’t too shabby.

As you can see below, he completed 40 of 59 passes (67.8 percent) for 443 yards and three touchdowns. And if you believe in PFF’s grading system, he graded out very well overall, as a passer, and as a rusher. He also surprisingly only scrambled 11 times in those four games.

If you want to go back to games that mattered, he put up similar numbers at BYU that Josh Allen put up at Wyoming. Over his four year collegiate career, Hill completed 58.2 percent of his passes, averaged 6.6 yards per attempt, threw 43 touchdowns, and was intercepted 31 times.

But if there’s one thing everyone can agree on, it’s his silly athleticism and weight room antics.

Taysom stands at 6-foot-2, 221 lbs and according to those at BYU, he ran a 4.4 40-yard dash at their 2017 pro day. There are also whispers from his coaches at BYU that they didn’t allow him to squat more than 700 lbs, Saints punter Thomas Morstead said when Hill squats 500 lbs it “looks like he’s standing up casually out of a chair.”

While his passing will be a mystery, Holder also looked at Taysom’s top rushing paths from this season:

With a likely run-heavy game script on the horizon, expect the Saints offense to resemble a Lamar-led Ravens or Cam-led Patriots offense. This will ultimately give a boost to Alvin Kamara and the two could be a prime (and cheap) Week 11 DraftKings stack.

Looking at this week against the leaky Falcons defense, Hill is in the perfect spot. The Falcons have allowed five of its last six opposing quarterbacks to exceed 313 yards through the air and four of those have accounted for more than one touchdown. Atlanta has also allowed four rushing touchdowns to quarterbacks this season.

Looking forward, the Saints get Atlanta this week, the Broncos in Week 12, and they square off against the Falcons again in Week 13. That’s a pretty easy schedule for the quarterback.

It looks like Sean Payton has given The Wolf some of his Kool-Aid, as he has Hill ranked as his QB12 in his Week 11 Rankings.