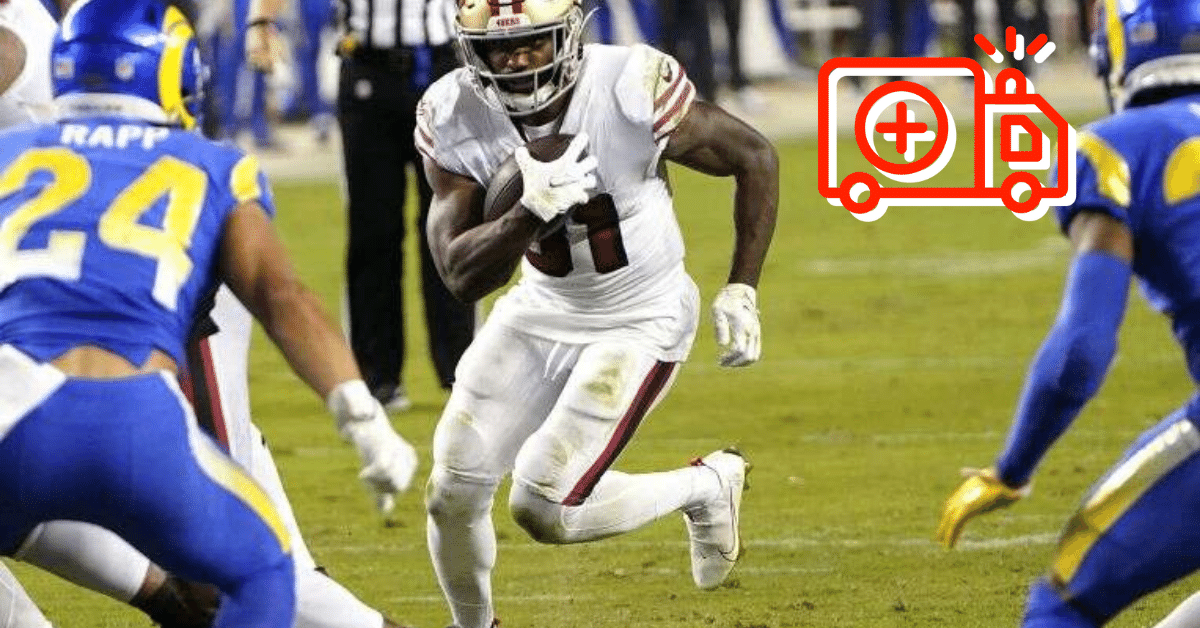 Raheem Mostert injured his ankle and is headed to the IR. This opens the fantasy door for Jerick McKinnon once again, while JaMycal Hasty, Jeff Wilson, and even Tevin Coleman deserve Week 7 Waiver Wire looks

Raheem Mostert suffered a high-ankle sprain during the 49ers Week 6 win versus the Rams. Mostert had zipped his way to 76 first-half scrimmage yards before departing for the entire second half. He’s expected to land on the injured reserve, opening up this highly-productive backfield for at least three weeks.

The question becomes: who should fantasy football owners turn to in Mostert’s absence?

With Mostert sidelined in Week 4, Jerick McKinnon led the NFL in RB snap rate (92%), operating as a true bell-cow. He posted 21 touches (7 rec), 97 YFS, and a TD for over 20 PPR FPs. Up until Week 5, McKinnon was scorching, posting a TD and 13+ FPs in every game through four weeks. Our McKinnon “League-Winning Penny Stock” call looked gold.

Stay up to date on all the Fantasy Football Value Swings! Bookmark our Fantasy Stock Watch. Even better, consume them in our cleanest format by downloading the Roto Street App.

Yet, the oft-injured speedster has cooled considerably since his torrid start. In Week 5, Mostert immediately regained the backfield reigns, logging 11 of 15 RB carries (69%) on 31 of 64 snaps (48%). Mostert turned these looks into an efficient 119 yards. Comparatively, McKinnon touched the rock three times for a healthy 5 yards. He was little more than an afterthought.

Instead, the 49ers turned to UDFA JaMycal Hasty (1%) more often. He saw 9 carries to McKinnon’s six, racking up 37 yards and some Shanahan praise in the process:

“Hasty was up for the challenge. Got some fresh legs in there and I thought he gave us some juice a little bit.

“Hasty got his opportunity, and from what I saw, I thought he really helped us.”

So how does this all play out while Mostert is shelved?

My best guess: McKinnon gets the nominal start and first crack. He shouldered the load in Week 4, and would’ve been an every-down guy in Week 3 but the Giants provided no pulse.  Ultimately, McKinnon hangs in for 55% of the snaps and overall volume, and is a quality RB2 in the process.

Still, Hasty is well worth lower-priority Week 7 Waiver Wire adds and FAAB Bids everywhere. Shanahan may indeed prefer McKinnon in a change of pace role only. How many times – including Mostert last season – have nobodies come in under Shanahan and seen 20+ carries for 140 yards? Hasty could very-well go on a wild 2-3 week run, boosting your fantasy backfield during the crucial Bye Week crunch.

Just to complicate things further, Jeff Wilson could return in Week 7. He’s been a goalline maven, scoring 2 TDs in Week 3 while mopping up the Giants in a blow out win.

Additionally, Tevin Coleman is a “long shot” for Week 7, but has a shot to return in Week 8. Savvy owners might stash Coleman a week early to avoid the FAAB / Waiver Priority Rush come next week.

The appeal of this backfield would lie in a one-man, max two RB committee. Should this devolve to a three-headed nightmare, fantasy value would be impossible to project. This should temper your waiver bids on Hasty, but still place them. The upside is as high as the floor is nothing.

Ultimately, expect 10-15 FPs from McKinnon over the next few weeks, with a fair-sized chance Hasty, Wilson, or Coleman steals those reigns.

Stay up to date on all the Fantasy Football Value Swings! Bookmark our Fantasy Stock Watch. Even better, consume them in our cleanest format by downloading the Roto Street App