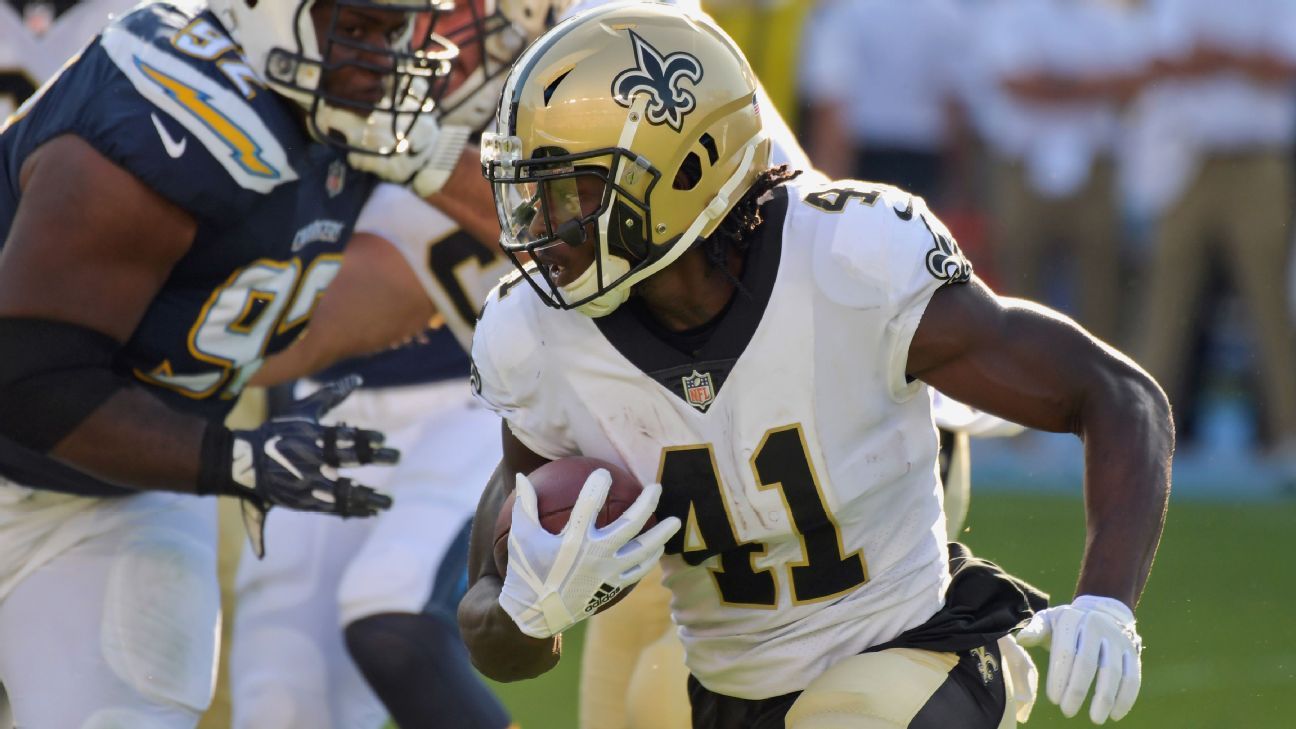 The Fantasy Football Trainers room is here to update you on all the Key Week 7 Injuries, while (more importantly) giving you a backup plan for your lineup. To get up-to-kickoff updates on all Actives and Inactives, be sure to tune into the Fantasy Tailgate LIVE on Facebook. We’ll cover all these plus answer every single one of your Sit / Start dilemmas. 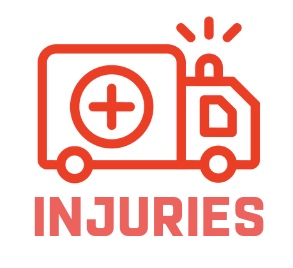 1) Alvin Kamara (ankle) is OUT for Sunday. Where do I turn?

Alvin Kamara has been ruled OUT for Sunday’s contest versus the Bears. Ultimately, this is a positive for his long-term outlook, but owners need a replacement plan.

The most obvious is Latavius Murray, Kamara’s direct backup, though his ownership has spiked from 43% to 67% in the last day with the news. He shoots up to my RB21 for the week, and is a very reasonable $5100 on DraftKings. As tough as the Bears are, they surprisingly rank just 24th versus the run right now.

If gone, another Hail Mary could be Alexander Mattison (25% owned), who’s worth stashing for his elite handcuff upside anyways. Still ,he could see some standalone value versus a Lions D/ST surrendering the third-most FPs to RBs. Mattison’s fresh off a 14 carry day (2 fewer than Dalvin Cook).

If nothing else… Mark Walton (20%) started last week for the Dolphins. He’d be… volume?

2) While in New Orleans… Jared Cook is also OUT (knee)

Though underwhelming all season, Cook has found the end zone in back-to-back weeks. His and Kamara’s absence pave the path for even more Michael Thomas and Murray volume and scoring upside. Meanwhile, the Bears D/ST and their $3k DraftKings price get even tastier.

If desperate for a TE Flier, Jimmy Graham (my TE10) has been frequently hate-dropped, and Oakland is a ripe matchup (7th most FPs to TEs), especially with both WRs banged up. However, if needing to dig deeper, Texans TE Darren Fells (28%) has 15 and 9.9 half-PPR FPs over his last two, and Indy has been especially generous to TEs (3rd most FPs). He’s my TE12, and seems to have taken a clear step-ahead of TE-mate Jordan Akins. If even more desperate, Luke Wilson (9%) takes over a Seahawks TE role that has been highly targeted in the Red Zone.

3) Todd Gurley returns for a Sexy Date with the Falcons. It’s even sexier because…

Todd Gurley has been removed from the injury report, just in time for a date with the juicy Atlanta Falcons. Moreover, Malcolm Brown (ankle) is doubtful. While Gurley had already regained the reigns at the GL, this only further secures his 2+ TD upside. The Falcons have surrendered the fifth most rushing TDs in 2019, and Gurley’s never been cheaper on DraftKings ($6400). He’s my RB8 for the week. Meanwhile, Darrell Henderson (32% owned) may see a role spike, and is worth stashing to scout this week.

4) Will you have your Workhorse David Johnson?

My guess is yes, but you need to be right on top of this all Sunday.

David Johnson (ankle) has practiced in limited fashion since Thursday, but was labeled a “game-time” decision by HC Kliff Kingsbury. This is a separate issue from his back ailment that hampered him throughout last week, though he played through it for his best fantasy performance of the season (25 half PPR points). Kingsbury noted DJ would not have played if the game had been Friday, though Johnson said he was “feeling good” and would “hopefully play on Sunday.” Regardless, Chase Edmonds (43%) is a must-own handcuff. His $4700 price on DKings = must play should DJ sit, as the Giants surrender the 11th most FPs to RBs.

Christian Kirk (ankle) is also a game-day decision. He’s moving around better, but the team won’t play him until he’s 100%. He’s reportedly not “all the way there,” and would be missing a juicy date with the Giants. If he plays, Kirk is my WR28 for the week. If not, Allen Lazard (38%, WR34), Cole Beasley (26%, WR35), and Auden Tate (34%, WR36) are my favorite fill-ins. Already my WR16, Larry Fitzgerald would see even more volume against this porous secondary if Kirk sits.  His $6100 DKings price is a bargain.

6) What’s up with the Packers WRs? THE RISE OF THE LAZARD KING!

As of Friday, Marquez Valdes-Scantling (ankle, knee) and Geronimo Allison (concussion, chest) had not practiced. HC Matt LaFleur said the pair had “48 hours to see if they come around.” Profound. Meanwhile, Davante Adams (toe) has already been ruled out.

Neither seem likely to play, which should pave the path for… THE LAZARD KING! Allen Lazard (38% owned) makes for a highly intriguing streamer this week. For all the reasons why, check this out:

Allen Lazard is the Week 7 Fantasy Stream from Heaven

*UPDATE* – Geronimo Allison was updated to Questionable on Saturday. He now has a better shot to play, but is no guarantee. We still believe in Lazard’s upside and trust from Rodgers.

7) Amari Cooper and Most Cowboys Trending Toward Playing

The Cowboys have dealt with injuries all over the lineup in recent weeks. As of now, however, the expectation is to have all players back for a must-win against the Eagles:

All injured Cowboys, save for Anthony Brown, are expected to practice today and play against the Eagles, barring a setback, per sources

That includes Amari Cooper (quad), who’s incredibly risky after “plateauing” in his recovery this week. Yet, he’s near-impossible to sit against this abysmal secondary. The Eagles surrender the most FPs to WRs in the league, and, in his last contest versus Philadelphia, Cooper roasted for 10 catches, 217 yards, and 3 scores. He’s my WR5 despite the risk.

More promising, Michael Gallup (knee) was removed from the final injury report. He seemed locked-in anyways, but this confirmation doesn’t hurt. He’s my WR10. Meanwhile, Randall Cobb should be rejoining the lineup, but shouldn’t be a fantasy consideration outside desperation streamers.

Indeed, Dak Prescott will benefit greatly from a fully-stacked weapons cabinet. Even more important, he’ll have Tyron Smith and Zack Martin back. Much of his early season success came from insane time in the pocket, and he’s been under far more duress without his stalwarts in front of him. He should pick apart this awful secondary for 25+ FPs. He’s my QB8, but has as much upside as any one this week.

As of Saturday’s walkthrough, Josh Gordon (knee) still had not practiced. He’s unlikely to play, and there’s no reason to take the MNF risk with him sucking on the field anyways. The better question is… can Gordon be cut in fantasy? (My answer: Yes)

Meanwhile, Phillip Dorsett (hamstring) is practicing in limited fashion. He’s blown up a few times this year, and has a clearer path to targets without Gordon. He’s still a risk since you’d have to wait until MNF, but might be a nice backup plan if you’re banking on Cooper and he’s suddenly inactive. There’s stream appeal.

After missing multiple weeks, Devin Singletary returns from his Week 6 bye at 100%. Singletary has flashed impressive tackle-breaking and wiggle in his chances, and now gets the most pristine matchup possible against a Dolphins team surrendering the most FPs to RBs in 2019.

While Frank Gore loses some appeal, both RBs are highly flex-worthy and solid bets for TDs. They are my RB28 and 29 respectively, with Gore just a tick higher with greater certainty.

Get up-to-kickoff updates on all Actives and Inactives, and all your Sit / Start questions answered LIVE with the Fantasy Tailgate on Facebook. We want to break our 250 question record, so come on down and have a drink with the boys!