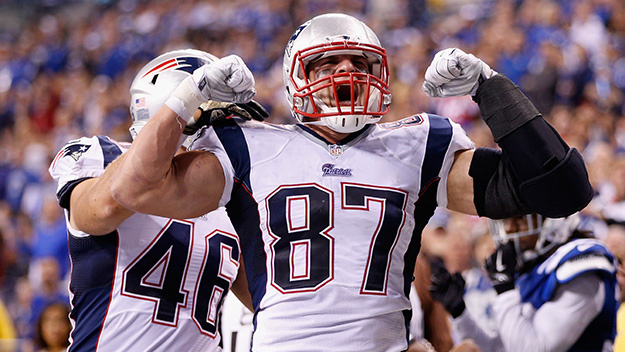 Eliot Crist storms into The Wolf's Den with some blazing hot takes -- with a particularly noteworthy one on Rob Gronkowski.

Crist and The Wolf first share some agreements on some bolder rankings, beginning with Jarvis Landry and why he’s among the best bargains in Fantasy Football. The pair then breaks down the targets he left behind in Miami, and how Kenny Stills is being completely overlooked as the likely new No.1 target on a team that’ll need to take to the air early and often. Last, they look at Mitch Trubisky’s upside in Matt Nagy’s offense, and detail why he is the ideal late-round QB2 candidate.

But then the gloves come on, and it’s time to duke it out. The Wolf feels Crist is too high on Kerryon Johnson, and Crist brings some big counter punches as to why this isn’t the case. The pair then look at Jay Ajayi, who The Wolf expects a massive rebound and high workshare from, but Crist isn’t buying it. Lastly, Crist explains why Jimmy Graham is overrated by The Wolf, while our host goes in-depth for why the Aaron Rodgers – Graham connection has more upside than most are recognizing right now.

This fire interview then wraps up with one of our strongest “No Huddle Offense” segments yet. From who belongs No.1 in drafts, to the most undervalued and overvalued at each position, to early-round season ruiners and late round “Penny Stocks,” we cover all stages of the draft with Crist’s bold but well-reasoned takes. In the process, we get a Rob Gronkowski rant that may just sway you to take him in Round 1 in every league.

Simply put, the Wolf’s Den was blazing with fire takes, and you can’t miss them… unless you enjoy sheepish 6th place finishes.

With both a keen eye for film breakdowns but a rich history in “Advanced Analytics,” Eliot Crist is a dangerously well-rounded Fantasy Wolf.

Crist began his fantasy career contributing for industry giants like 4for4 Fantasy and Pro Football Focus.  He’s also written extensive draft reports at Bleacher Report. In all his stops, Crist has built a reputation for digging into the data and film to find the angles and edges few others can — hence, why we wanted him on as our second Wolf of 2018.

He also hosts a number of game-changing Podcasts, centered around DFS.

Don’t use any of the apps above?

Join “The Wolfpack” to get every new episode and “show notes” sent straight to your inbox!