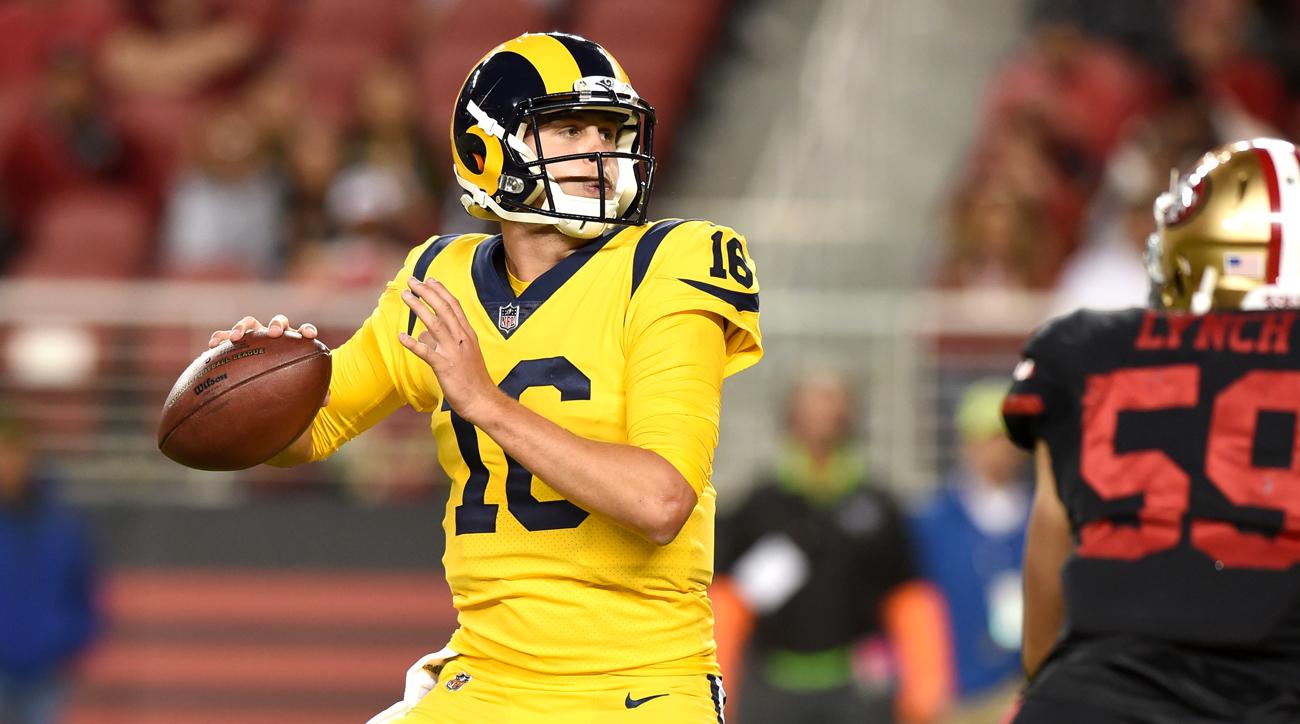 The only sit/start guide you need to follow on the 'web.

Per usual, a handful of the start predictions whiffed while it was easier to pick out the sits and guys that were set to under perform. More confident this week in the starts as we get clearer pictures as the season progresses.

There was some fantastic news for Goff and the Rams as Giants cornerback Janoris Jenkins was suspended indefinitely from the team. Jenkins is one of the elite cornerbacks in the league, meaning his absence opens up plenty of opportunities for Goff and the Rams receivers. He’s done well in plus matchups, and this is another favorable one as the Giants have surrendered a healthy number of passing yards per game. It also helps having Gurley as an option out of the backfield for you.

We know that the Houston Texans are going to be putting up a lot of points on the Colts especially through the air with Watson-Hopkins-Fuller. Don’t forget the guy in the backfield who is going to be given the ball when the Texans are up by 20+. Miller was heavily used in the running and passing game last week, scoring in both facets of the offense. His versatility will shine once again versus an inferior defense.

Brett Hundley clearly isn’t the answer for the Packers to succeed and make a push in the playoffs. Green Bay won’t be having tons of success in the passing game and are clearly focusing on the run game through Jones. Despite Montgomery back from injury and in the lineup/rotation, he has been dethroned by Jones who looks like a pure runner that the Packers were really looking for. In a prime time game against Detroit who boasts some solid corners, Green Bay has a better shot going on the ground.

The trade to send Kelvin Benjamin to Buffalo was big for Funchess in Carolina. He has a very similar make and skill set to Benjamin given their size and strength so it shouldn’t be that big of a difference for the team. Now Funchess is the guy and is going to benefit from having roughly 7 targets a game to be spread around to other receivers. The teams running game hasn’t been productive at all, so all of this team’s success will come through the air.

As we mentioned with Goff, Janoris Jenkins has been suspended for this contest against the Rams. Watkins if you haven’t noticed has been riddled with an absurd schedule, facing elite after elite corner game after game. The Cardinals, Jaguars and Seahawks is a MURDERERS ROW of corners and it’s easy to see why he’s struggled as of late. Now he gets a chance to breathe against the Giants and the last time he was set up nicely, he went OFF on TNF against the 49ers.

There’s a simple flowchart. Who do the Giants play this week? Insert opposing tight end. This is a tougher one though as Higbee is relatively unknown and has done little to nothing this season so far. But if you are super desperate for a TE replacement during this tough bye week and need a hail mary, Higbee is your guy. I also really like Jack Doyle this week.

Last season’s MVP has been struggling and looks nothing like the unstoppable force that he was last year for Atlanta. Kyle Shanahan must have been that important after all because this entire Falcons offense just looks mediocre. A road trip to the stingy Panthers defense won’t be what it takes to get out of this slump.

Freeman is dealing with a shoulder injury and has the “questionable” tag on him currently. Tevin Coleman got a handful of work in last game after Freeman got hurt and it could make sense to allow Coleman to work himself back into the mix here and limit Freeman’s ceiling. As mentioned, the Panthers have had an underrated defense this year and Freeman is a whole different dog on the road than at home in ATL.

Ajayi was just traded to the Eagles from Miami which is great long term of his fantasy value. This week though, it’s horrible. First off, coach Doug Pederson has said the rotation won’t change and wouldn’t name Ajayi the starter. I mean, he’s likely to be the guy but the coaches refuse to say it and won’t denounce the other Eagles backs. Now add in that Philadelphia is taking on the Denver Broncos defense. It’s better to sit Ajayi this week and see how this backfield turns out carry wise.

I made this mistake once with Antonio Brown, but I’m more comfortable this time putting Green on this list. The combination of the elite Jaguars secondary and a crappy Andy Dalton has me shooting my shot more confidently than Big Ben versus the Jags. I had Green ready to explode last week against the Colts, and Dalton just couldn’t make that happen. I don’t like Greens odds here against the Jags.

The loss of Carson Palmer is big time for Fitzgerald who had a hot start to the season. We know Fitz generally comes out of the gates hot and then starts to fade as the season progresses likely due to his age. Now Palmer is gone and we’re forced to rely upon Drew Stanton to get him the ball. The only thing that worries me is the matchup with the 49ers who are just plain bad. In the end, I just don’t trust Stanton. Shout out to former Fantasy Fullback Dive podcast guest from Fantasy Labs, Ian Hartitz here.

Larry Fitzgerald with and without Carson Palmer since 2013. Sad! pic.twitter.com/dQT6b2hthN

Did you see that Ravens defense last Thursday? Pretty damn good. The Titans have really struggled, most notably when they barely squeaked out a win against the Browns in overtime. Mariota missed a handful of balls to Walker who’s dealing with an ankle injury and sat out practice on Monday. It’s been a rough season for Walker, and the Titans as a whole who were expected for big things.