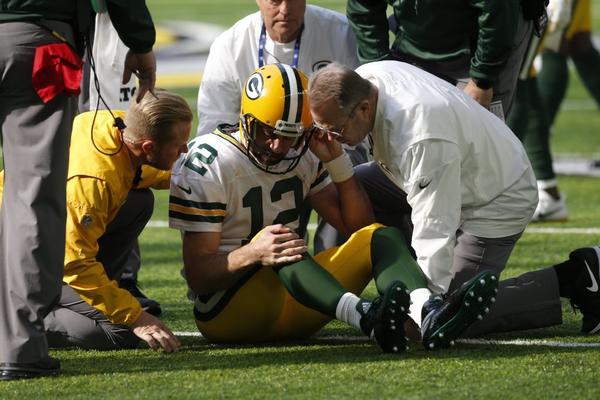 Another superstar is likely done for the fantasy season.

QB Aaron Rodgers suffered a broken collarbone. There's a chance he could miss the rest of the season.

What a devastating year for big-time injuries in fantasy football. First it was David Johnson. Then it was Odell Beckham Jr. Now it’s Aaron Rodgers. Rodgers went down with what was thought to be an injury to his throwing shoulder after being driven into the ground by a Vikings’ defender, but it was later diagnosed as a broken collarbone — likely ending Rodgers’ fantasy season. Since most do not carry two quarterbacks when having Rodgers under center, it’s time to either make a trade, scour the waiver wire for a top 12 quarterback or stream a quarterback based on matchups. The Wolf will take care of you on the waiver wire, while RedSocker will help you stream a quarterback each week. Like always… we’ll get through it together.

Jameis Winston has a shoulder injury and is doubtful to return.

X-rays on Jameis Winston’s shoulder were negative, and he will undergo an MRI on Monday in Tampa.

Jameis Winston went down early with a shoulder injury and was quickly declared doubtful by the Bucs, but the team was also down by a million at the time. When they started to make a comeback, Winston was seen warming up on the sidelines and looked like he might have been able to come back in, but the Bucs decided to stick with Ryan Fitzpatrick for the remainder of the game. As noted above, Winston’s X-rays were negative and he should be good to go for Week 7 against the Bills.

#Bucs QB Jameis Winston suffered an AC joint sprain in his throwing shoulder, source said. It may be something he’ll be able to play through

.@Jaguars RB Leonard Fournette did not return, but after being spatted for right ankle injury, he was medically cleared to return to action.

Holy shit this was frightening. As seen above, Leonard Fournette made a cut and it looked like his knee and/or ankle, foot gave out as he planted, before falling to the ground in extreme pain. It looked as though the rookie’s extraordinary season would be cut short as he couldn’t even get off the field without help from the trainers. Somehow, Fournette was medically cleared to return to the game after being diagnosed with an ankle injury, but the scoreboard didn’t allow him to return. MAJOR DISASTER AVERTED.

Reid says Tyreek Hill is being evaluated for a concussion

Tyreek Hill was held in-check for the majority of the game and was unable to be on the field for the potential game-winning drive after getting his bell rung on a punt return. Hill looked dazed and confused on the sideline and is being evaluated for a concussion. Unfortunately, the Chiefs play on Thursday night against the Raiders, which means Hill will likely miss the divisional showdown. If confirmed, there’s little chance that Hill will be able to clear concussion protocol, meaning you’ll have to go to your bench or the streaming route for Hill’s spot in your lineup.

9:52 PM UPDATE: Per Mike Florio of ProFootballTalk, Hill does not have a concussion. We’ll keep you updated once the Chiefs make an announcement.

Emmanuel Sanders just went through the locker room on crutches with some sort of wrap on his ankle.

The Broncos were a complete disaster on Sunday Night Football.  They got dismantled by the lowly Giants, and their night got worse when they lost their toughest wideout, Emmanuel Sanders. Giants stud safety Landon Collins broke on an incomplete pass and landed directly on Sanders’ ankle in what looked like a pretty brutal injury. Sanders was in obvious pain and was unable to put any weight on the ankle. His X-rays were negative, but he’ll undergo an MRI on Monday.