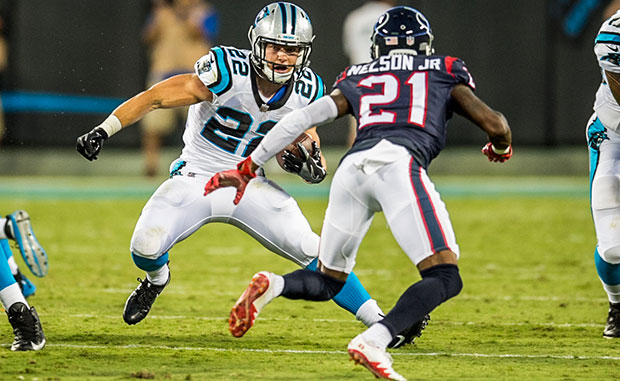 Things are a little different in a standard league. See who we are keeping on the bench for Week 3.

It’s about that time again to start setting your lineup for another week of football. Now two weeks in, we have a better idea of what to expect. Would you have guessed that Alex Smith, Trevor Siemian and Carson Wentz would rank one, two and three in fantasy points for quarterbacks? Me neither.

Last week I had my misses. If you benched Travis Kelce or C.J. Anderson because of me, I’m sorry. Predicting the future is hard. However, I also suggested starting Jason Witten and benching Matthew Stafford so let’s not completely throw my opinion down the drain.

By now you should know the deal. I evaluate matchups, usage patterns and player talent when making my picks. This article was written with standard scoring in mind. I’m still unsure why I write introductions for these things. I know nobody is reading this part. I could say anything right now. When I was six I accidently crushed a toad with a rock and felt really bad about it. Why are you still reading this? Check out of list of players you should believe in or bench.

After just four second-half passes were needed against the Giants, Stafford’s arm will be much busier this week as he tries to outscore the Falcons’ high flying offense. The quarterback has started the season hot, completing over 70% of his passes in both games. With 2016 sack leader, Vic Beasley, out with an injury, Stafford should have plenty of time to find the open man.

If there is a team to “Get Right” against, it is New Orleans. Though off to a slow start, Newton now takes on a Saints defense that has allowed opposing quarterbacks to complete over 80% of their passes this year. At home against a Drew Brees led offense, the conditions are right for Newton to deliver a dynamic performance.

Carr is currently tied with Tom Brady for the fourth most fantasy points amongst quarterbacks. Why wouldn’t his success continue against a Washington defense that has given up the fifth most passing yards (538) thus far? With a loaded offense around him, don’t be surprised if Carr is in the MVP discussion at the end of the year.

Through two games the Saints have given up 414 yards from scrimmage and two touchdowns to opposing running backs. While Jonathan Stewart sees more carries and goal line work, Christian McCaffrey is more involved in the passing game, and is a perpetual homerun threat. Both roles are favorable against a flimsy New Orleans defense.

Gurley’s 5.5 yards per carry (YPC) average Sunday was his highest YPC since week 14 of the 2015 season. He’s also on track to set a career high in passing targets, as he has ten in two games. Now facing a 49ers team that has mustered up all of six points this season, expect Gurley to be leaned on in a low scoring affair.

Coleman is a gamble from week to week because of his lack of volume. Nevertheless, his great efficiency has led to fantasy relevance. The former Hoosier managed 45 yards and a touchdown on just eight touches last week against the Packers. In what’s expected to be a shootout versus the Lions, Coleman should have several opportunities to reach the endzone.

Hang in there Green owners. After failing to score a touchdown through two games, Cincinnati has fired offensive coordinator, Ken Zampese. The move brings hope to an offense yearning to turn things around. Green now takes on a Packers team that lacks established talent at cornerback. Look for the Bengals to force feed Green in Green Bay.

Have I mentioned the Saints are bad at defense? They’ve given up the most passing yards in the league thus far (777), allowing an opponent to crack 100 yards receiving in both games. With Greg Olsen on IR, Benjamin becomes Cam Newton’s primary target. Though he sat out Wednesday, Benjamin should be a full go come Sunday if he’s able to practice by the end of the week.

After a preseason full of hype, Parker started the year strong with four catches for 85 yards against the Chargers. What’s more impressive is he did it against Casey Hayward, who might be the most underrated corner in the league. With another week to build a rapport with Jay Cutler, Parker should improve upon his success versus a struggling Jets team.

J-Doyle rules! At least Jacoby Brissett thinks so. The newly acquired quarterback connected on all eight passes sent Doyle’s way in their overtime loss to Arizona. Doyle managed 79 yards on those eight catches. He now faces a Cleveland defense that has given up the most fantasy points to apposing tight ends since the beginning of the 2016 season.

Will Ertz appear on this list every week? Quite possibly. Only Antonio Brown and Adam Thielen have more receiving yards than Ertz thus far this year. He’s second to only Jason Witten in tight end targets. Against a Giants secondary who is lockdown on the perimeter, look for Carson Wentz to take the path of least resistance with Ertz in the middle of the field.

The formula for beating the Cowboys has been set. Load the box against Zeke, and contain Dez Bryant on the outside. Who does that leave for Prescott to throw to? Witten. Dak’s 89 pass attempts are the most he’s ever thrown in a two games span. With Patrick Peterson shadowing Dez, expect Witten to be busy.

A Bill Belichick led defense at home against a rookie quarterback? Sign me up. Houston has allowed a league high, 13 sacks through two games. Left tackle, Duane Brown, appears no closer to ending his hold out, and the tight end position has been cursed with injuries. We’ll see plenty of rookie mistakes from Deshaun Watson come Sunday.

No team has less rushing yards than the Giants (97). Only two teams have allowed more sacks than NYG (8). They now travel to Philadelphia to take on an Eagles team who’s notched the fourth most sacks in the league (8). Poor Eli Manning appears in line for a beating from a dominant Eagles front.

The last time Winston threw multiple touchdown passes in a game without turning the ball over was week eight of last season. Now on the road against a stout Vikings defense, odds are Winston will give the ball to the other team. Until the third-year quarterback can take care of the rock, his usage will remain matchup based.

After just two touchdowns in two games, Mariota will be hard pressed to turn things around against the daunted Seattle defense. He’ll be without top receiver, Corey Davis, and Eric Decker has made the Jets look smart for releasing him so far. Though a lot of hype surrounded Mariota in the preseason, his breakout will have to wait.

Since the start of the 2016 season, Roethlisberger’s touchdown to turnover ratio on the road is 12/10. He’ll be in Chicago Sunday to face a Bears defense that has held Matt Ryan and Jameis Winston to a combined two touchdown passes. Though he has the weapons to prove doubters wrong, Roethlisberger has consistently underwhelmed on the road.

A bothersome hamstring has restricted Murray to just 88 yards on 24 touches this season. Second-year ‘back, Derrick Henry, received more carries last week against Jacksonville, and impressed with 92 yards and a touchdown. It’s hard to envision Murray bouncing back against a Seattle defense that has given up the third-fewest fantasy points to opposing backfields since the start of last season.

West appeared to be in line for a big workload when Danny Woodhead was injured in week one. However, Buck Allen out-snapped West 42-15 in Sunday’s win over the Browns. West is reportedly dealing with a “soft tissue” injury, and sat out practice Wednesday. You’d be wise to bench West against a much improved Jacksonville defense.

Forget benching, you should consider dropping Blount after he carried the ball zero times against the Chiefs last week. The 30 year-old ‘back doesn’t fit Philly’s offense, and offers zero value unless he reaches the endzone. That appears unlikely against a Giants defense that is yet to surrender a rushing touchdown this season.

Jeffery broke-out last week with seven catches for 92 yards and a score in Kansas City. That kind of performance will be tough to duplicate against an air-tight Giants secondary. Though Jeffery’s stock rises if cornerback, Janoris Jenkins, is forced sit again, he hasn’t caught a touchdown in back to back games since 2015.

A recipient of preseason buzz, Crowder has disappointed thus far with just seven catches for 61 yards through two games. Washington’s entire passing game has struggled, as Kirk Cousins is historically a slow starter. Without DeSean Jackson and Pierre Garcon to distract defenses, Crowder has seen more attention from opposing secondaries.

Cincinnati has allowed the fewest passing yards (209) in the NFL this season. Though Adams saw a robust ten targets against Atlanta, Jordy Nelson practiced in full Wednesday and is expect to return to play. With the Bengals’ offense struggling the way it is (zero TDs), Green Bay may not have to score a lot of points to win.

It’s the same old story for Tyler Eifert. The tight end is currently dealing with back and knee issues which kept him from practicing Wednesday. Even if he suits up, one has to wonder how productive he’ll be in an offense that is yet to reach the endzone. With only four catches for 46 yards in two games, Eifert should be benched.

After a bounce-back 2016 campaign, Graham has just two catches for ten yards this season.  To make matters worse, Graham was held out of practice Wednesday with an ankle injury. The Seahawks as an offense have just 316 passing yards through two games. Until Russell Wilson finds his groove, I’d look elsewhere for a tight end.

Much like Eifert, Reed is a talented tight end who can’t stay off the injury list. He failed to practice Wednesday due to an ailing chest and toe. Reed has just 84 yards in two games. Though Washington will need to score frequently to match Oakland’s high-powered offense, Kirk Cousins has looked out of sync this season.

Defenses that played the Saints this season have combined for negative one fantasy points. Though New Orleans is averaging less than twenty points a game thus far, they are yet to turn the ball over. Expect Brees to continue making smart decisions in Carolina.

Go ahead and count on whoever is playing the Patriots to be on the bench list every week. Though Houston has one of the better defenses in the league, they’re no match for Tom Brady and the diverse New England offense. The Texans will also be without starting cornerback Kevin Johnson.