Stock Down: Demaryius Thomas and Emmanuel Sanders on the decline due to Broncos QB concerns 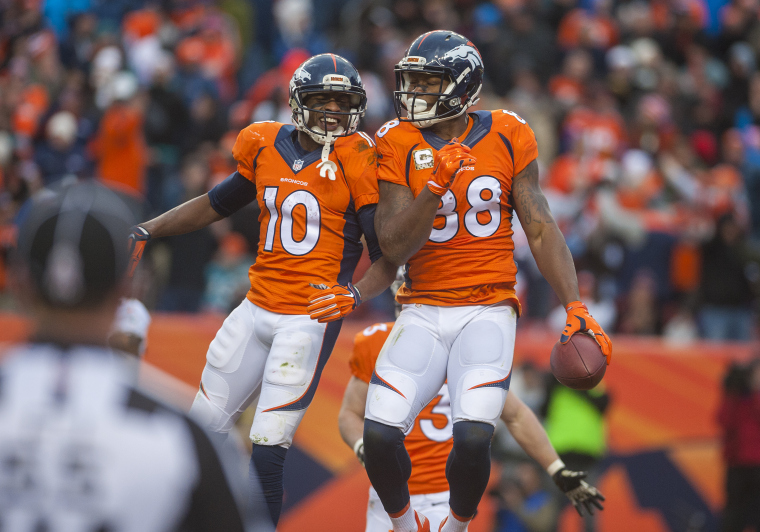 The Wolf recently put out his updated Top 150 Big Board that had Demaryius Thomas trending upwards (#25 overall #13 WR) after a strong showing in the preseason with Mark Sanchez. Across from Thomas is his teammate Emmanuel Sanders, who is currently rated 94th overall (#43 WR) on Wolf’s Big Board.

When your starting quarterback heading into Week 1 is Mark Sanchez, things don’t look very good. But compared to what they dealt with last season, there was some sense of optimism for both receivers. After a poor training camp, it looks like Sanchez could be cut even slide down to third on the depth chart in favor of no-name Trevor Siemian and rookie Paxton Lynch. The Denver Broncos have had quite the quarterback carousel over the past 5 years, which paints an ugly picture for Broncos’ receivers.

Thomas was drafted in the first round of the 2010 NFL Draft, along with Tim Tebow. As fun as it was to root for Tebow, he was not a very good quarterback. Thomas’ first two seasons in Denver saw him post a combined statline of 54 catches for 834 yards and 6 touchdowns. By comparison, Benjamin Watson’s 2015 season looked very similar, but with 20 fewer receptions for Thomas.

Fast forward to 2012 with the arrival of Peyton Manning. With Manning behind center, Thomas posted three straight seasons of at least 90 catches, 1,300 yards and double digit scores. When Sanders walked away from Pittsburgh after the 2013 season as a free agent, his career catapulted once he signed with Denver over New England. Working as Manning’s No.  2 target, Sanders utilized his speed and elite route running abilities to the tune of 101 catches, 1,404 yards and 10 touchdowns in his first season with Manning and Co.

Last season when Manning became a corpse and was partially replaced by Brock Osweiler, Thomas saw his numbers take a hit, as he gracefully fell from the Elite WR1 category. The big wideout finished with only 6 touchdowns on the year, the first time he was held under double digit touchdowns since he was catching ducks from Tebow.

After the Broncos somehow won the Super Bowl with a dead quarterback, Manning rode off into the sunset.

Enter Trevor Siemian from Northwestern. He was a 7th round pick in the 2015 draft and has played one snap in the NFL, a kneel down. During his first three seasons in college, Siemian only started three times before taking over the role for good his last year and he only played 11 games before tearing an ACL. The former Wildcat threw 7 touchdowns and 11 interceptions that year, and he is likely the leading candidate to lead the defending Super Bowl champion Broncos. Crazy stuff.

Here are the numbers through two preseason games with Siemian at QB:

If it’s the rookie from Memphis (Lynch) that somehow gets the starting nod, know that he was drafted similarly to Carson Wentz, where the team sees him as the future quarterback, not someone ready to step in right away and compete for a Super Bowl.

From a fantasy perspective, Thomas still remains a targeted receiver, with an ADP of 27. Sure, the talent and ceiling are still there based on his great amount of skill and his ability to come down with jump balls, but his fantasy floor has dropped immensely. Thomas used to be one of the safest WR plays in all of football and now he’s a major red flag because of Denver’s piss poor QB play.

With Sanders, his ADP is currently at 62. Similarly to Thomas, his floor has been lowered tremendously while having a limited ceiling. Receivers like Tyler Lockett, Marvin Jones and Sterling Shepard have much lower ADPs, but offer a far greater ceiling for this season and beyond. I would be much more comfortable going with one of those three guys above, than the Broncos’ slot guy.

One of the main problems with starting either of the young and inexperienced quarterbacks is that they will most likely go back to coach Gary Kubiak’s bread-and-butter; which is running the football. CJ Anderson was already billed to have a big season, along with the optimism surrounding rookie running back Devontae Booker, it would make sense to pound the rock and limit mistakes by the young signal caller.

Overall, stay clear of these two receivers on draft day. When we’re all sitting back laughing at the Broncos for having potentially the worst QB stable, you can join in with us knowing some other fool spent a second rounder on Demaryius Thomas, or a fifth rounder on Emmanuel Sanders.