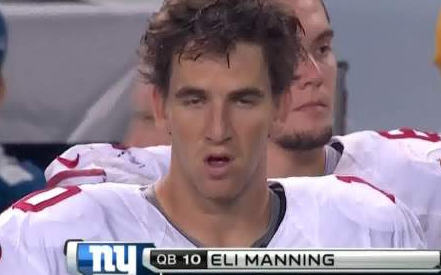 Everyone knows the big names who will be selected within the first few rounds. Yeah, you’ll be screwed if your first round pick blows his ACL mid-year, but there are plenty of guys who will outperform their average draft position (ADP) due to their unsexy names, and bring you points and even a championship.

Here are our top 10 most unsexy names who you can ride to a title:

Philip Rivers- With his binky back (Keenan Allen), expect Philip Rivers to put up excellent fantasy numbers in 2016. Not only is Allen returning from injury, but so is Antonio Gates. They also added a burner in Travis Benjamin to take the heat off Allen and others. With Allen in the lineup through the first eight weeks of last season, Rivers threw for 2,753 yards and 18 touchdowns. Due to being surrounded by absolutely no healthy weapons in the second half, his numbers fell off. Expect a major bounce-back season for the bolo tie and the Chargers’ offense.

Eli Manning- If this list were actually about looks, then Eli Manning would be the clear QB1. But for his sake, we aren’t here to judge that. Per RotoWorld, in two years under Ben McAdoo’s system, Manning has reached 600 pass attempts, 4,400 yards and 30 passing touchdowns in each season while averaging 17.4 points per game. Also, Manning arguably has his best weapons of his career, with Odell Beckham Jr., Sterling Shepard, Victor Cruz (maybe, probably not), Larry Donnell, Shane Vereen and Rashad Jennings. Let your opponents pass on good skill players to take Aaron Rodgers, Andrew Luck, Drew Brees, etc. and you can look at guys such as Rivers and Manning, who’s numbers will rival those of the “upper tier” quarterbacks.

Rashad Jennings- The word coming out of the Big Apple all offseason has been how Rashad Jennings could get 15-plus carries per game and that he will be their lead back. After leaning on a completely stupid four-man committee of Jennings, Shane Vereen, Andre Williams and Orleans Darkwa, they gave the keys to Jennings and he responded with 521 total yards. He’ll still have to deal with Vereen stealing receptions out of the backfield, but Jennings is a cheap RB2 that has the potential to be a rock-solid RB2.

Ryan Mathews- We’ll probably regret this pick, but Ryan “Glass” Mathews (if healthy of course) will lead the Eagles in touches and rushing touchdowns. Actually, Mathews was a positive in Chip Kelly’s offense, averaging 5.1 yards per carry and according to RotoWorld, Mathews tailed only David Johnson for the highest fantasy points per carry. This is the first time in a while where Mathews will be the lead guy and he even has the hands to be a true three-down-back if Darren Sproles goes down. Stay. Healthy.

Larry Fitzgerald- Following a tough 2014 campaign (63/784/2) where fans began to ponder retirement for the elder statesman of the Cardinals high-flying offense, Larry Fitz returned to his typical self in 2015. Ole’ reliable was targeted 145 times last season and responded with a 109/1,215/9 statline. Although he has the most recognizable name to common fans, he’s been overshadowed by teammates David Johnson, John Brown and Michael Floyd. Make no mistake about it, those guys will still put up serious numbers; however, don’t sleep on Fitz and his ability to put up another monster year in that aerial attack.

Willie Snead- After being signed to the New Orleans Saints practice squad at the end of the 2014 season, he made his NFL debut for the Saints in 2015. Last season, the undrafted receiver out of Ball State caught 69 of his 101 targets for 984 yards and three touchdowns. The Saints lost Ben Watson and Marques Colston during the offseason, and although they added Coby Fleener, Snead’s targets should get a small bump and a TD increase. Don’t forget that Snead did not see starting snaps until week 2 (he also missed a game) and our source down in New Orleans believes Snead will be Drew Brees’ No. 2 guy on the perimeter.

Stefon Diggs- The Vikings’ offense will be very good in 2015 and Diggs will lead the team in receiving. As a rookie, Diggs was forced to play the X and he put up solid numbers during Weeks 4-11 (did not play Weeks 1-3), with 40 receptions and 604 yards. Due to horrible weather outside in Minnesota and a bit of a rookie slide, Diggs fell off a bit for the remainder of the season. Now playing in the new dome in Minneapolis, expect Teddy Bridgewater‘s small hands to have no problem throwing the ball to Diggs. Diggs has moved to the Z position, which will allow him to get a free release and motion around on offense. Expect big things out of Bridgewater and Diggs in ’16.

Eric Decker- Eric Decker and his smokeshow of a wife would probably be pissed if they saw that he’s on this list, but this list is strictly for fantasy owners and not for looks. If I told you that Decker put up 12 touchdowns and 1,027 yards on 80 catches last year, would you be believe it? Well, he did. And he has also put up 80-plus receptions and double digit touchdowns in three of his six seasons. Maybe his touchdowns will slip to 10 or so, but his targets should remain around 130ish.

Antonio Gates- We talked about one old timer above and Antonio Gates will actually be playing as a 36 year old in 2016. Only two seasons removed from a 69/821/12 season, Gates will enter this season as healthy as he has been since that 2014 season. Last year, the tight end missed the first four games of the season and only started four games, as he limped through the entire season with a MCL injury. Still, he found the end zone five times. With the departure of Ladarius Green, expect Gates to play the majority of the snaps at tight end in the fantasy-underrated Chargers’ offense. The addition of Travis Benjamin to take the top off the defense and the return of  Keenan Allen will only help Gates in the red zone. Yes, he is still a legit TE1.

Dwayne Allen- Colts TE Dwayne Allen has never put up TE1 numbers, but with the departure of Colby Fleener and a monster four-year deal in the same offseason, the arrows are pointing up for the 6-foot-3, 265 lb tight end. Word out of Indy is that the Colts will be running three wide receiver sets with TY Hilton, Donte Moncrief and Phillip Dorsett, meaning Allen will constantly be the lone tight end on the field and a potential red zone touchdown machine. Although we do not expect Allen to be targeted as much as Fleener was in 2015 (84), we do expect 10 or so touchdowns and a good number of red zone targets.