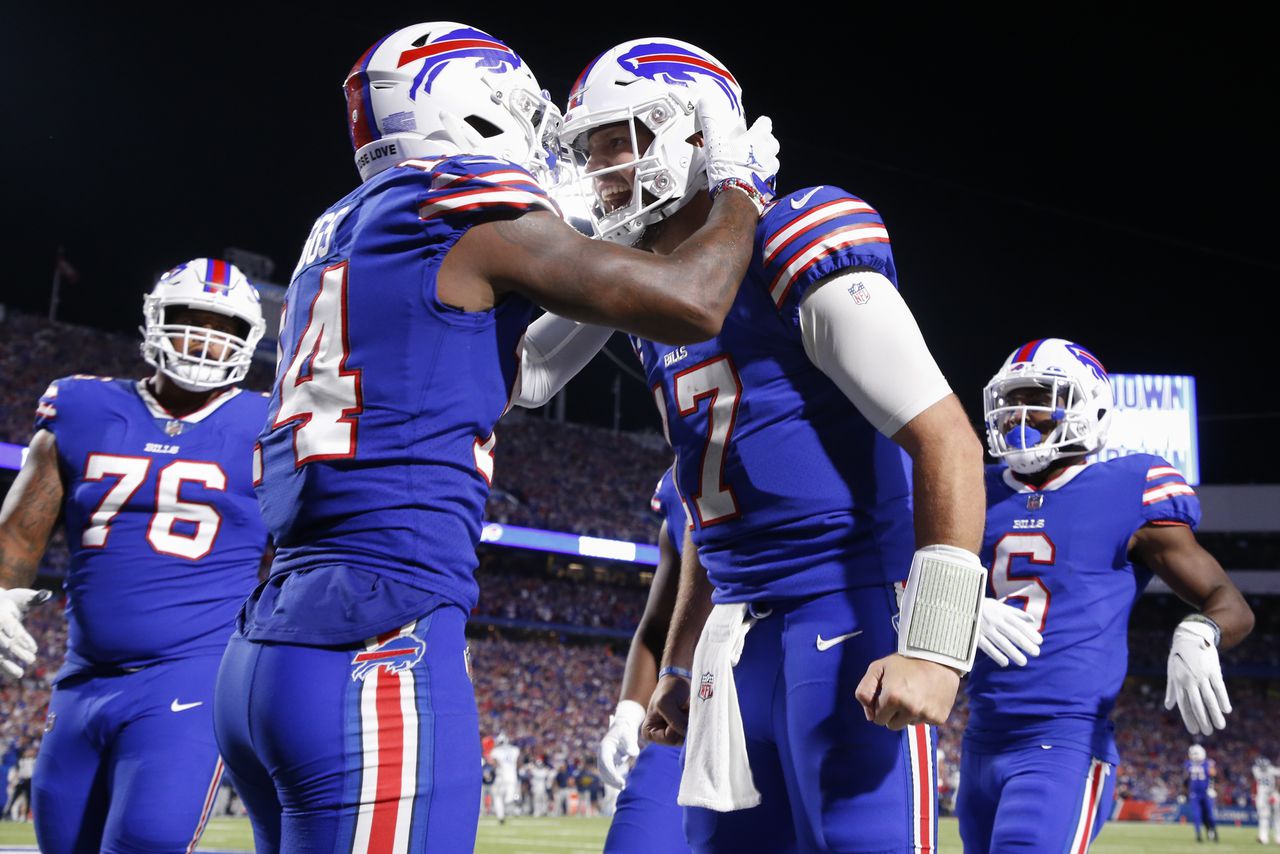 It's our last chance to cash in on a "full" slate.

The 2022 fantasy football season has ended. Whether you were involved in last week’s title game controversy, are still working through it, or weren’t even affected, none of that matters when it comes to DFS! So let’s strap in and enjoy this absolutely BIZARRE conclusion of the NFL regular season with so many exotic players like Nathan Peterman ready to step out into the spotlight. Please for the love of god, nobody roster him.

Josh Allen is red hot right now and he has a plus matchup with the Patriots who he’s absolutely torched over the last few seasons. Add in the emotional weight this game is carrying and you know Allen and the Bills will be playing their absolute best this Sunday for a chance at the No. 1 seed and to send their rivals home for the rest of the season.

Joe Burrow, another red-hot quarterback, looked like he was on the way to another great performance before Monday’s game was canceled. Ja’Marr Chase looks healthy again and the whole offense has taken a step forward in recent weeks. The Bengals are playing in a must-win game against the Ravens.

Surprise surprise. Fire Nathaniel Hackett and Wilson goes off for for 25 points. Coincidence? Possibly, but the two rushing touchdowns are a bit fluky despite somewhat looking like the old Russ. You know he wants to end the season on a high note and set a narrative for next season. The Chargers might get into a spot where they can rest their starters depending on the Ravens game happing simultaneously.

How wild are you looking to get? The Jets have been eliminated but can play spoilers to divisional rival Miami Dolphins with a win this week. Flacco started three games this year, resulting in 18,30 and 7 points, two of those throwing for over 300 yards. I’m just saying, he could be a slate winner if he does what we’ve seen him capable of doing in this meaningless game in the cold weather.

The Bears need to lose this game and are missing several key defensive players. While the Vikings could get into a spot where they rest key guys, I would expect them to come out early and build a lead through the ground game. Cook has had a quiet few games since his eruption against the Colts. It’s a prime bounce-back spot here.

The workhorse back has returned with 100-plus yards in back-to-back games. Seattle is facing a must-win game here to potentially make the playoffs and they get a struggling Rams team. He’s been kept out of the end zone since Week 12, so he’s a great candidate for positive touchdown regression to add on top of his solid yardage numbers.

A double-digit scorer in 10 of his last 11, Najee Harris has proven to have a high floor while looking to break through that ceiling like he did last week. He’s the best player on this Steelers offense and now faces a must-win game against the Browns, who have struggled against the run. Harris’ pass-catching elevates his stock as well along with Pickett’s playmaking and use of screen passes.

I don’t love this play at all, but Zack Moss should see volume with 17 carries per game over his last three outings. The Colts have Ehlinger at the helm who is very limited, and they’re facing the Texans who are terrible against the run and are also likely trying to lose the game so they can secure the No. 1 overall pick. Maybe Moss just happens to stumble into the end zone after all.

If I love Josh Allen this week, then I have to like Diggs against the Patriots. Again, Buffalo has their way with New England who is already without top corner Jack Jones. Diggs should have another big game like he usually does against these divisional rivals.

Who remembers Garrett Wilson’s coming out party in Week 2 with Flacco under center? I certainly do. 8-102-2 on 14 targets, sign me up if we get an ounce of that magic this week. Wilson is a target hog in this offense and as long as Zach Wilson isn’t under center, then I’m all for rostering Wilson at a cheaper price. Great volume here.

Amari Cooper went off last week for the Browns, now it’s gonna be DPJ’s turn to flourish against the Steelers. The home/road narrative for Cooper and DPJ is so bizarre but it continues to work week after week. His target numbers have dropped a hair with Deshaun Watson under center but stick to the script and trust DPJ to come up with a big score trying to ruin the Steelers’ playoff hopes.

With 21 targets over his last two games, Dortch is dripping in target share here and it’s only ascending with DeAndre Hopkins and James Conner ruled out for the week. This speedy slot guy has worked wonders whenever he’s been given the chance this season. Although the Niners present a tough matchup, the volume should be there.

Another week, another score for Kittle. Him and Purdy have great chemistry and will continue that trend against a Cardinals defense that struggles mightily to defend the tight end position. As long as the Niners don’t get too hot too quickly and start pulling guys, Kittle should have his way.

Tyler Conklin started strong and then faded away, but he’s coming back within the Jets’ offense. Six catches for 80 yards last week and scored double-digit points in all three of Joe Flacco’s starts. Makes you think, doesn’t it?

No more Greg Dulcich means more work for Albert O. He entered the season with promise after the Broncos shipped out Noah Fant, but he did not live up to the hype. However, he showed some promise last week with 3-45-1 on six targets. Maybe Russ can revive both his own and Albert O’s stock moving forward.

I can’t imagine a lot of scoring in this game, especially if the Texans want to hold onto the No. 1 pick.

Nathan Peterman is starting for the Bears. That should be enough for you right there.

Similar to the Colts pick above, there won’t be a lot of scoring here. Plus, Sam Ehlinger is under center for the Colts.