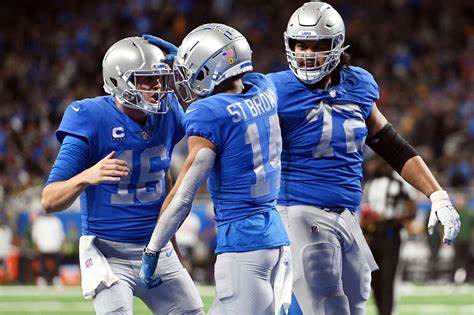 Expect fireworks in the Motor City.

We’re onto 2023! What better way to ring in the new year than with a fresh DFS slate in Week 17. If you’re like me and were wiped out of all your leagues last week, you can still save what little soul you have left with some DraftKings contests and plays during this penultimate week. Some teams are still pushing for playoff spots and seeding, while some might be resting guys in preparation. If you still have a team playing in the finals this week, then good for you I guess, but I definitely hate you. It’s DFS time.

After an absolute let down game against a stingy Bills defense, I haven’t given up on Justin Fields with a top matchup against the Lions. After playing in horrific weather last week, Fields gets to play in the dome against a defense that bleeds fantasy points to quarterbacks. I’m very intrigued by this spot which looks like a prime bounce back opportunity for Fields to run wild.

The Lions have turned their whole season around and are now fighting tooth and nail to get into the playoffs. A huge part of that turnaround is Goff’s resurgence and the offense as a whole. They’re now putting up serious points, negating turnovers, and now get one of the worst passing defenses in the league at home. Goff should have no problem whatsoever beating this defense like a drum.

The Giants are still fighting for a playoff spot and while the Colts might be a tough defense to pass on, Saquon Barkley can exploit them on the ground. His receiving value puts his upside towards the top of RB ranks and he’s punched in a touchdown in four of his last five games.

Few running backs are seeing as much usage as James Conner is in Arizona’s offense at the moment. As a 15-plus carry lock and a handful of receiving and goal line work, Conner has truly been a stretch-run hero. With something called David Blough starting for the Cardinals, expect plenty of touches for their veteran running back.

Despite limited usage, AJ Dillon has scored in four straight games for the Packers. Aaron Jones continues to be limited with an ankle injury, which has allowed Dillon to cash in. Jones’ injury is lingering, which makes me think Dillon will continue to get extra work this week against one of the league’s worst defenses.

There’s been a shift in the Falcons offense where Tyler Allgeire has stolen the RB1 role. Averaging 17.5 carries over his last two games, the Falcons have given the rookie a solid workload along with some receiving opportunity. Pair his increased role with a struggling Cardinals defense and you have some good value at the RB position.

Since I really like Goff this week, I absolutely have to pair him with the Sun God against the Bears. Chicago has nobody capable of matching up with St. Brown, so this target hog should have an absolute field day against a bad Bears defense. ARSB knows it’s fantasy championship week and that’s when the real stars show up and play their best for us all.

Since his return from injury, Keenan Allen has received his typical crazy target share from Justin Herbert. Allen has 31 catches over his last three games and has scored over 20 points in two of those three without even finding the end zone. The floor is extremely high and if he can find the end zone against a suspect Rams’ squad, the sky is the limit.

Despite the Broncos struggles offensively this year, Jerry Jeudy has been on a good run of late while building great chemistry with Russell Wilson. Seeing 27 targets over his last three games, Jeudy is the clear WR1 in this offense in a game where Denver will attempt to keep up with Patrick Mahomes and the Chiefs’ elite offense. In their last matchup, Jeudy went off for 8-73-3.

We absolutely have to attack the Vikings defense through the air as teams have passed on them with reckless abandonment. Christian Watson is dealing with an injury and finally got in a limited practice on Friday. Watson will likely be under 100%, so give me a fresh Lazard who saw 11 targets on Christmas against the Dolphins.

Drake London went through a serious mid-season slump, but he’s back to target hog status seeing 32 targets over his last three games. He’s developed rookie chemistry with Desmond Ridder and has put up over 12 points in each of Ridder’s starts this season. The Cardinals don’t present a difficult matchup so expect another high-volume game for London this week.

Do we think Brock Purdy likes throwing to George Kittle? Two touchdowns in each of his last two games, Kittle is a serious weapon for this offense. The Niners are red hot and are showing no signs of slowing down with Purdy under center. This red zone beast carries significant touchdown upside for your lineups at a thin position.

Now this is the Evan Engram we all hoped to see for many years. Over his last three games, Trevor Lawrence has targeted his tight end 33 times and it’s resulted in double-digit fantasy scoring each game. The Jags offense is ascending, and Engram has only given Lawrence another consistent weapon on the perimeter. Don’t expect the lowly Texans’ defense to put the clamps on Engram this week.

Getting the league’s best defense against Jarrett Stidham should be a crime. As a Patriots fan who’s watched Stidham in the past, I can promise you he won’t be dicing up the Niners defense as he’s very prone to sacks and turnovers. This could be a 20-point DST performance right here.

The Patriots have had a very good defense this season. Unfortunately, it’s been their offense holding them back. The Dolphins are without Tua Tagovailoa and will trot out Teddy Two Gloves at Gillette. While Miami still has crazy weapons in Tyreek Hill and Jaylen Waddle, this offense should be watered down with Bridgewater at the helm.