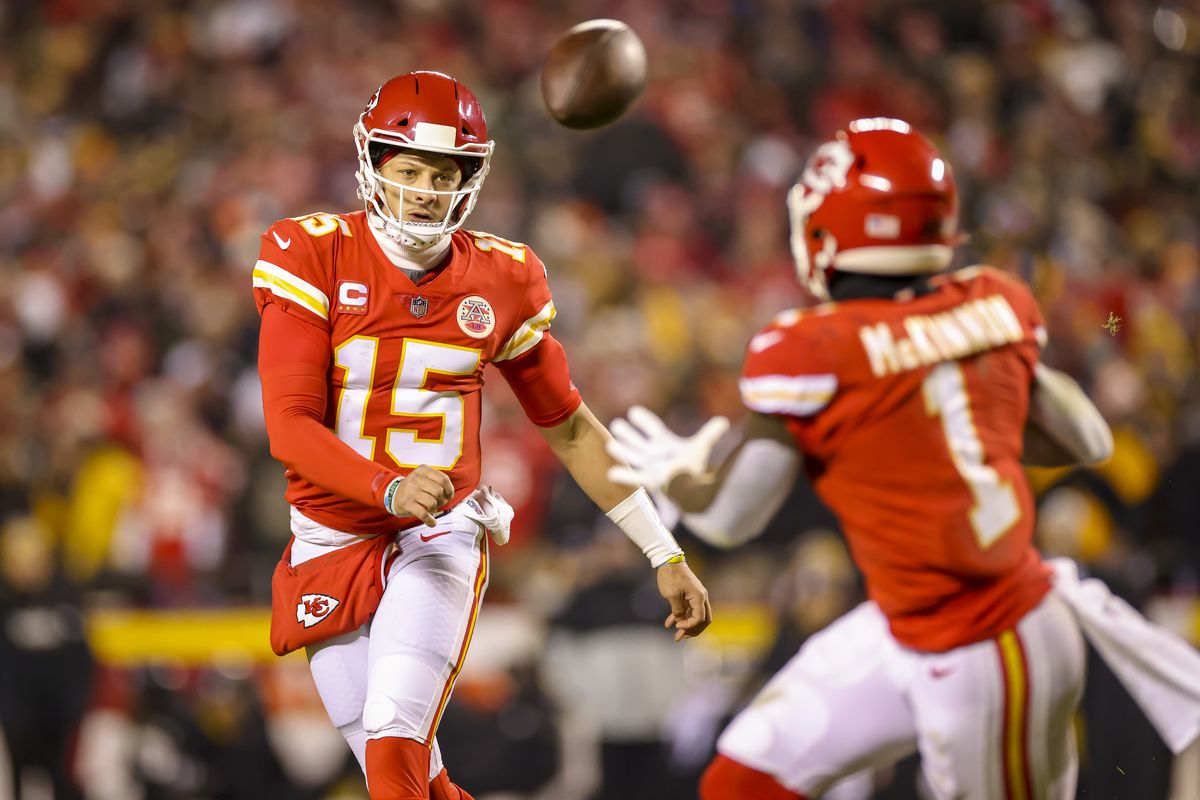 Happy Holidays RSJ Family! We’ve got an interesting slate here with Saturday games as the NFL knows better than to mess with NBA Christmas. With three games taken off the slate for Sunday though, we’re left with some Christmas Eve magic of a handful of games on a surprise day before the holiday. Weather is going to be a major factor this week, so make sure you’re checking right before the games start to see just how much of an impact it will be on these games and picks.

When looking at games this week, few games stand out as high total, weatherproof affairs. This Seahawks vs Chiefs game is the one that intrigues me the most between two good offenses that are capable of putting up points and shooting out. With an implied total of 49.5, this is one of only three matchups over 45 points total. I’d fully trust the playmaking ability of Mahomes, at home, coming off two uncharacteristically close games in what could be an absolute smash spot.

The Wolf’s favorite Jalen Hurts replacement this week, we’re all about the #BCB train. Over 15 DK points in all three contests and Brock Purdy looks like he has a firm grasp of the 49ers’ offense. When you can dump it off to George Kittle, Christian McCaffrey, and Brandon Aiyuk and let them do all the hard work racking up yards, it makes your job a bit easier. I almost put Danny Dimes here but I felt gross doing so and honestly would prefer Purdy in DFS and redraft.

Return of the King. The fantasy cheatcode has returned with Jimmy Garoppolo out of the lineup, seeing 26 carries and eight targets in Week 15. He has a low total of 28 DraftKings points over his last three weeks and has been scored Earth over opposing defenses during that span. I don’t see him slowing down any time soon, especially after watching Saquon have a day against this Commanders’ defense.

Death, taxes, and Derrick Henry destroying the AFC South. Henry feasts on his divisional opponents and the Texans are the juiciest of them all. Henry has exceeded 200 yards on the ground in each of his last four matchups against Houston and has found the end zone nine times during those four games. Nope, those aren’t typos. The only pause I have is the switch to Malik Willis at quarterback, which will force the Texans to stack the box at an even higher rate. Still, Henry should get 30-plus touches in this one.

I think I learned my lesson here, targeting the plodder and “lead back” in this offense over the dynamic receiving threat. Jerick McKinnon has back-to-back games of over 33 points as he’s arguably been their best receiver over the last few weeks. Flashing that elite athleticism The Wolf has always loved, the 30-year-old is turning back the clock to become an elite weapon under Mahomes. The hottest player at the position in one of the best offenses — keep striking while the iron is hot.

With the Ravens’ offense really struggling without Lamar Jackson, JK Dobbins has returned to provide a glimmer of hope that’s keeping this team somewhat afloat. Dobbins has surpassed 100 yards in both games since returning from injury while only averaging 14 carries per game with no receiving work. He’s still working his way back, so one would think he’ll only shake off more rust with more action.

DK Metcalf was already seeing a significant number of targets in Seattle’s offense, but now with the injury to Tyler Lockett, I’d expect that number to go up. As highlighted above, this matchup has the highest projected point total and his connection with Geno Smith has only strengthened with Ken Walker banged up. The Chiefs might not have anyone in the secondary who can physically matchup with DK.

Chasing the volume here, Drake London has 23 targets over his last two games and hopefully, Desmond Ridder can start to develop a relationship with his fellow rookie. The Ravens’ pass defense hasn’t been great and London is the only realistic option to do any work through the air.

Another guy who will get a bump from the Lockett injury, track star Marquise Goodwin has had some productive games when given an increased role. He’s battling both wrist and ankle injuries, but he’s taking over the WR2 job in a pass-happy offense in the highest-projected scoring game on the slate if you’re looking to pivot off Metcalf. Goodwin is the ultimate boom-or-bust option that could separate you from the pack.

Juwan Johnson’s been on an absolute heater over the last two months with seven scores over his last seven games played. The Saints have ruled out numerous receivers already, most notably Chris Olave who had been the team’s clear WR1 this season. Johnson could see increased targets, especially around the red zone with all these absences. HOWEVER, the weather in this game could prove to be a major problem with the passing attack due to severe wind and snow. Taysom Hill ($4,800) has a QB designation but could be a sneaky punt play here if the Saints decide to grind it out in the Wildcat formation in these conditions.

Scraping the bottom of the barrel here, but Jordan Akins has five-plus targets in three of his last four games and scored a touchdown last week against the Chiefs. The Texans ruled out Nico Collins once again and although Brandin Cooks looks like he’ll play this week, Akins still has a red zone presence.

The 49ers are arguably the best defense in the league playing against a quarterback who is known to be risky with the ball and take some unnecessary shots resulting in turnovers. It’s all adding up to be a big day for the Niners DST.

This could be a play if the weather does indeed destroy the day in Cleveland. Nick Chubb and the Browns running game haven’t really been up to the level of what it was to start the year and Deshaun Watson is still showing some rust after not playing for nearly two years.

I get this may look bizarre, but the Bears were actually good against the Eagles’ offense last week in a tough cold game. We’re expecting “Bear Weather” here against the Bills, who will probably sleepwalk into this one thinking it’s an easy win before looking ahead to their matchup with the Bengals.