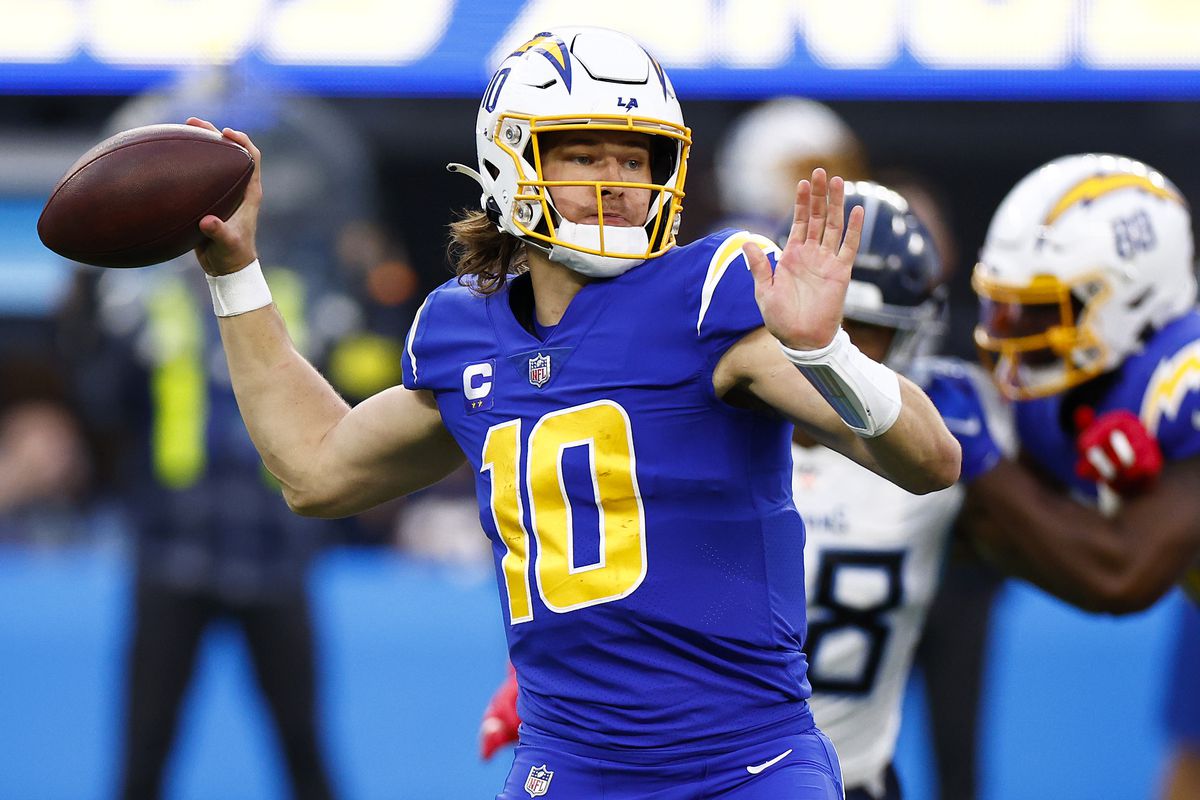 Let's make some cash this week.

Week 15 is an interesting one thanks to the handful of Saturday games we’ll be seeing this week. Make it five games now taken off the slate for primetime slots so this slate is a bit smaller than usual but let me tell you, there are a handful of plays that I LOVE this week so I’m getting that itch and feeling that we could be in store for a nice and successful Week 15.

Fighting for a playoff spot, the Chargers offense has been interesting, to say the least, with little to no running game at all. Their pass-heavy offense plays well into the Titans defensive style as they are very good against the run, but struggle defending the pass. Herbert has all his receiving weapons back plus Ekeler out of the backfield so I love this matchup.

With 20+ point performances in three of his last four, (pretty sure I picked him that one off-week) Lawrence is taking his game to the next level. While the Cowboys generally present a tough matchup, their secondary has been banged up and was minced last week by the Texans. Even if Dallas gets ahead early, Lawrence will have to throw a lot to keep up with their offense, and the running game has been a non-factor forcing his hand more often.

While the threat of Elliott and his 15+ carries with goal-line work looms, Pollard has still scored 20+ points in five of his last six games. Despite his limited touches, Pollard is still making every touch count being an extreme playmaker. He gets a juicy Jaguars defense to feast all over so there’s no sign of slowing down for this back.

The loss of Kyler Murray was devastating for the Cardinals offense. With Colt McCoy now under center, I’d expect Conner to become the focal point of the offense. He’s already a workhorse back that gets all the goal line work, but he’s also heavily used in the dump-off game now that Arizona is saddled with a backup QB.

While Jerick McKinnon has been the back going off, he seems to fit the game script of high scoring back and forth affair when a receiving back is needed. This game against the Texans screams blow out so I’d much rather have Pacheco in there plodding his way down the field and hopefully punching in a score or two.

The news of Zach Wilson being the starter today was devastating as I had to take Mike White, Garrett Wilson, and Elijah Moore out of all lineups. However, the one guy I’d still consider in that offense is Knight. He’s averaging 15 carries per game while scoring 10+ points in all contests. A seemingly workhorse back for the Jets offense that will probably dial it back a bit with Wilson back at the helm and maybe lean on the ground game. Detroit’s defense is still one to target.

He’s scored a touchdown in three straight games now, but Brown hasn’t been the focal point of the receiving game in all of those contests. While Devonta Smith is getting his, Brown has had his moments, especially in that revenge game against the Titans. He’s got the juiciest matchup this week against the Bears defense that is horrific and is just way more skilled than any secondary member that gets thrown at him. The matchup is as close to perfect as it can be.

Think Herbert missed having his guy around? Back-to-back 14 target games for Allen in his return to action as he’s clearly the target hog for the Chargers offense. We saw what AJ Brown did to this secondary, and we know they struggle against the pass. Smash Allen here while he’s still healthy.

This is me betting on talent more than anything. I love Drake London and think he’ll be very good in this league. A QB change that puts rookie Desmond Ridder under center might just be what’s needed to get this passing game going as Marcus Mariota couldn’t really do much of anything.

Last week the Texans were without the top two wide receivers, Brandin Cooks and Nico Collins. Chris Moore stepped in with a 10-124 day on 11 targets in their absence. Both are inactive once again this week and now Dameon Pierce was ruled out as well. With next to no skill position players left, Moore is looking at another target hog day against a Chiefs defense that gives up plenty of points to receivers.

This game was flexed out of prime time so now we get to watch New England’s struggling offense on this slate. WR1 Jakobi Meyers finally got a practice in but is no lock to play, would probably be limited regardless. DeVante Parker was ruled out after his brains turned to mush last Monday, meaning it’s next man up for Nelson Agholor who has some big play ability and turned extra reps into 10 targets last week against the Cardinals. Kendrick Bourne could be a play as well, but Agholor seems to have more upside here. Plus it’s a revenge game for Agholor with the Raiders.

One of my favorites, Schultz has gotten elite TE1 usage in snaps, routes run, and targets in a high-scoring offense. Facing the Jaguars, that’s a fantastic spot for this Cowboys offense and Schultz is coming off a 10-target game here. Basically their WR2.

Similar to Agholor, the injury to Patriots receivers gives Henry a bump when it comes to New England’s offense. He’s played 65% of snaps in nearly every game and should be a big red zone threat should Mac Jones ever make it down there. He’s due for a red zone passing touchdown and Henry would be the best bet to catch it.

The Steelers have yet to name a starter between Mitchell Trubisky and Mason Rudolph which should tell you everything you need to know about the Steelers offense heading into this week. Carolina has a sneaky great defense so this looks like a matchup advantage and a half here, I can’t see either of these QBs putting up much offense.

The Broncos have a great defense. It’s a real shame their offense has sucked all year because they deserve better. But now you have a nice matchup here against Colt McCoy and a struggling Cardinals team that just lost their star QB and probably all of their morale. With Brett Rypien likely to start, this could be a super low-scoring game.