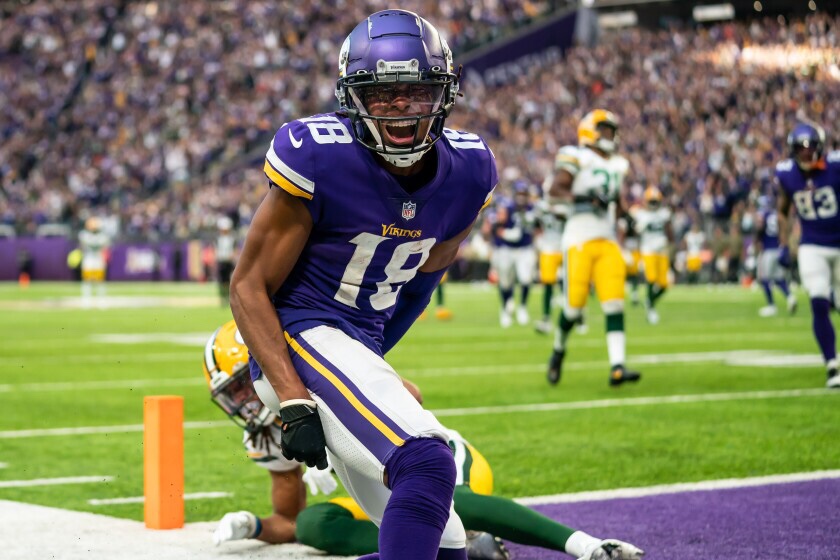 Let’s take advantage of these gifts on PrizePicks.

The NFL’s Saturday games kick off this weekend with three Week 15 matchups taking place: Colts vs Vikings, Ravens vs Browns, and Dolphins vs Bills.

If that’s not exciting enough for you, our friends at PrizePicks are in the middle of its 12 Days of Picksmas celebration with new promos being offered every day. So far, they’ve given out free entries and protected plays, and on December 16th from Noon to 5 pm, they’re boosting payouts on flex plays up to 30x your entry. Be sure to check every day until Christmas to see what promo is coming next.

If you’ve never played PrizePicks, it allows users to pick and combine two to six player props to win up to 25X on an entry. If you’re a player prop bettor who typically uses a sportsbook, sign up for PrizePicks using our link below to view and take advantage of their very generous lines.

In honor of the 12 Days of Picksmas, we’re making picks via PrizePicks on the NFL’s Week 15 Saturday slate. Click the button above for a first deposit match (free money), mix in some of our picks below with some of your own, and fund that last-second holiday shopping.

This may seem crazy as Justin Jefferson is in the midst of a historic year, but he’s put up 45 yards or fewer in two of his last four games, both of which came against top five pass defenses. Indianapolis also boasts a top-five pass defense and has yielded the fewest receiving yards to wide receivers this season. Jetta will leave his mark on this game no matter what, but I think Indy keeps him under 88 receiving yards.

In his last time out before Indy’s Week 14 bye, Alec Pierce turned eight targets into four catches for 86 yards and a score against a strong Dallas defense. Now, after two full weeks of rest, Pierce faces off with the 32nd-ranked pass defense in the league and figures to be a large part of the game plan once again.

Kareem Hunt has been pretty quiet in 2022, and has recorded more than six carries just once in his last five games. That one game was against Houston, the worst rush defense in football. Baltimore, meanwhile, is ranked second against the run, and Hunt had five carries for four yards in their previous matchup this season. He likely gets a handful of targets in the passing game, but I don’t expect much of a rushing presence from Hunt in this one.

Justin Tucker over 1.5 FGs made

Considering this is an AFC North divisional matchup in December, it’s no surprise the over/under for this game is set at 38. Points will be at a premium and both teams will take them however they can get them. Justin Tucker is tied for second in field goal attempts and tied for first in field goals made, which are things we’ve come to expect from the greatest kicker in NFL history. With Baltimore leaning on its backup QB who’s fresh off a stint in the league’s concussion protocol, I think they’ll have trouble finishing drives. Expect Tucker to have at least a few FG attempts in this one.

After two straight games with zero rushing attempts and four straight games finishing with zero rush yards, Tua Tagovailoa broke off three scrambles for 28 yards against the Chargers last week. His rushing numbers have been low ever since his head injuries earlier this season, but it seems he’s getting more comfortable using his legs again. He’ll need to be a threat on the ground to open things up for Miami’s offense against the Bills in what will be a snowstorm.

Miami has lost two straight games and in those two contests, Jaylen Waddle has combined for three catches on nine targets for 40 yards. Waddle has been battling a leg injury he suffered in Week 13, but it hasn’t held him out of any games. He’s without an injury designation this week and by now it should be clear to Mike McDaniel and company that Miami needs to fully utilize both Waddle and Tyreek Hill for their offense to be at its full potential. I’m expecting a bounce back from Waddle here.

There you have it. The perfect Saturday six-pack of PrizePicks player props to help you out on Sunday’s main slate.