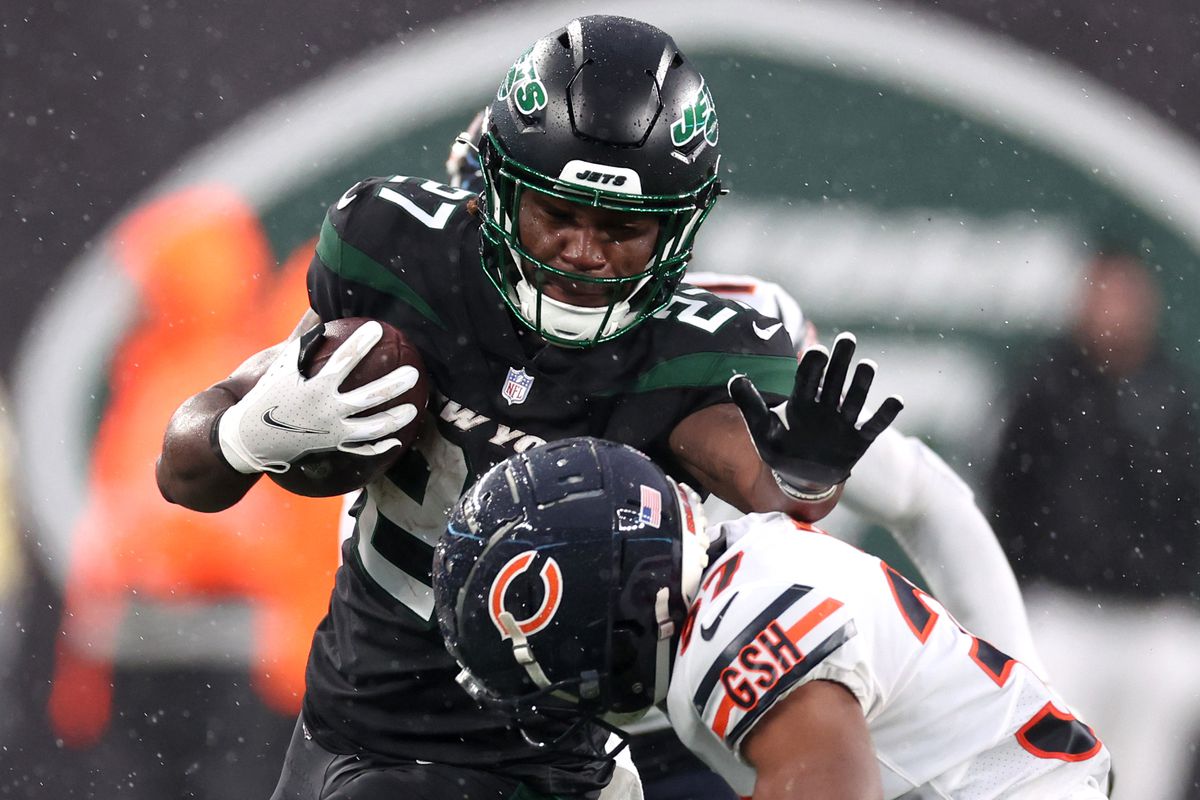 Like J-Rob, Zonovan “Bam” Knight entered the NFL as an undrafted free agent. In 2020, Robinson found himself at the top of the list of UDFA running backs. In 2022, Knight found himself only behind the Packers’ Tyler Goodson.

With solid agility and contact balance, Knight set the record for career yards-per-carry at North Carolina State (5.4). However, decent-but-not-great athleticism contributed to Knight’s projection as a borderline NFL player, along with a more than a desirable number of fumbles (7), and inconsistent pass protection. But don’t sleep on Bam’s upside — especially in the Jets’ offense.

That upside was on display in Week 12 against the Bears. Bam had three catches for 34 yards and his 69 rushing yards were the most for a Jets running back debut since 1964.

His output didn’t catch coach Robert Saleh by surprise, as Saleh’s been complimenting Bam since camp. It’s the kind of aspect that argues in favor of staying power for Zonovan.

“I think everyone saw Bam had some fresh legs,” Saleh said, “he was juicy as a runner, getting north and south. …. He gets north and south quick, so he’s a one-cut runner, which is kind of the staple of our scheme, and he played fast, he played physical, lot of effort to gain yards after contact. The thing for Bam, and it’s not to compare, everyone’s got their own unique running style, but Bam just getting north and south quick. They’re NFL runs where the O-line blocks it for two [yards], but you grind for four.”

WHAT ABOUT THE OTHER RUNNING BACKS IN THE ROOM?

If Knight’s performance was the measuring stick on whether he gets work over James Robinson, then it’s Knight’s job to lose. Robinson should be active for as long as Michael Carter is out, which may not be very long. Carter’s ankle sprain is low-ankle, which doesn’t carry close to the severity of a high-ankle sprain, and leaves him day-to-day.

With the possibility that Carter isn’t out even one game, Robinson may not be activated again this season. Combine that with how late it is in the fantasy season, and Knight becomes a prime candidate as a player worth dropping your remaining FAAB on. Not to mention with how much Mike White loves to check down to his running backs, Knight should flourish as the RB1 A or B to Carter.

The Jets get tantalizing matchups against the Seahawks and Lions, who are top-three in most rushing yards allowed per game, in weeks 15 and 17, right in the meat of the fantasy playoffs.

As news comes in about the Jets’ RB room, be sure to keep up with our Rest of Season Rankings and follow us on our YouTube channel.