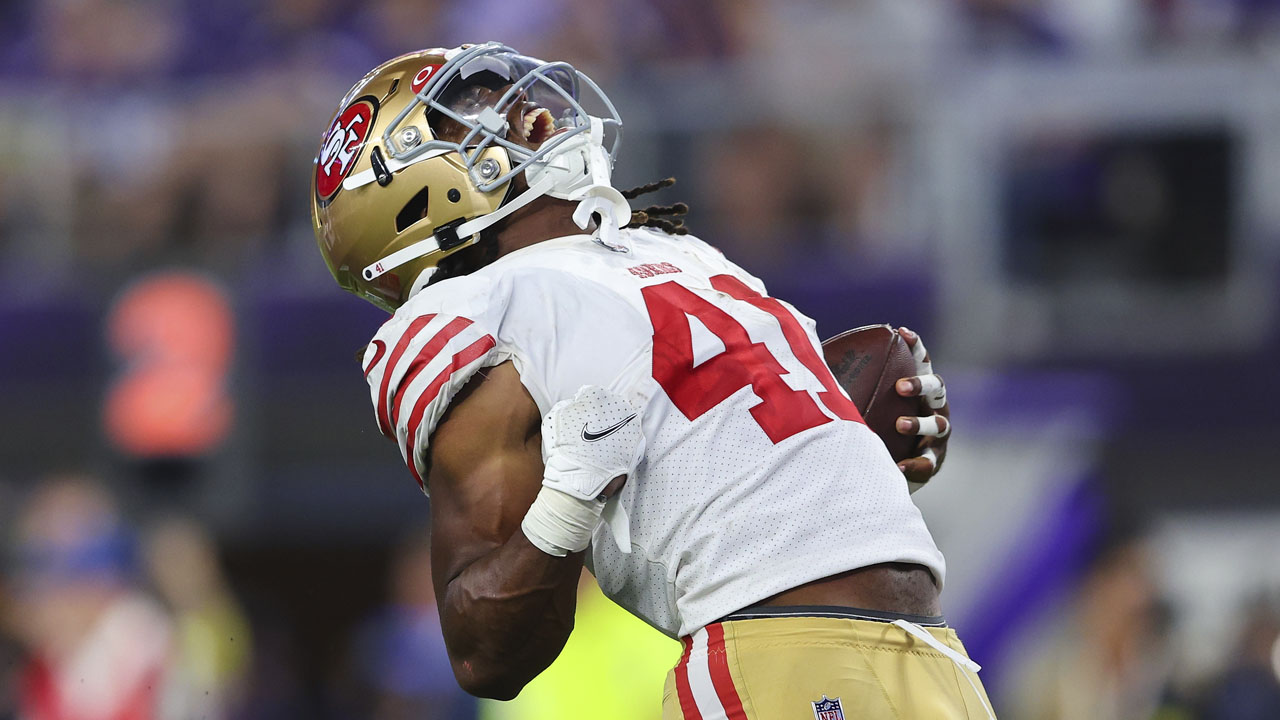 Be patient and stash Jordan Mason.

49ers insider Grant Cohn may get under the skin of sensitive 49ers faithful and even the actual team, but when he talks glowingly about specific players… I listen.

As a reoccurring guest of the Fantasy Fullback Dive, Cohn told us to keep an eye on Elijah Mitchell last year before he overtook Trey Sermon. Then last week, he joined us again to tout undrafted rookie Jordan Mason over Jeff Wilson Jr. and Tyrion Davis-Price as Mitchell’s top replacement off the Week 2 Waiver Wire.

Although Wilson Jr. finally looked decent for the first time since his meniscus tear two seasons ago and Mason was unable to get a snap with Kyle Shanahan opting for Tyrion Davis-Price, Mason should get his chance to shine this weekend with TDP out for three to four weeks with a high ankle sprain.

“He needs to now,” Shanahan said of Mason’s readiness. “Last week was his first week getting a lot more of that. I thought they both stepped it up in that area. I thought JP [Mason] had his best game in special teams. We never knew that he [TDP] was hurt. He’ll [Mason] have to be ready this week now.”

Should it concern Mason managers and those who want to stash him that Kyle Shanahan gave carries to TDP over Mason? I’d normally say yes. But, Shanahan is always up to his usual tricks with his backfield and I personally wouldn’t read too much into it. In the end, Mason will get his chance in Week 3.

His terrific preseason, which led to the team cutting Sermon after one season, proved his upside is immense and his talent could be greater than anyone on the depth chart outside of Mitchell.

“Unfortunately, though, it really came down to us being so scared we were going to lose J.P. Mason,” Shanahan detailed about cutting Sermon over Mason. “We didn’t really expect for him to be where he was at. We thought we’d be able to keep four backs and keep him on the practice squad.

“But the way he turned it on at the end of camp in practice and then what he showed in those preseason games, we just really felt we were going to lose him.”

If the 49ers’ brass and Cohn are both high on Mason, then we are too.

Keep an eye on The Wolf’s 2022 Rest of Season Rankings to see where Mason settles. Entering Week 3 Waivers, Mason is still available in 95% of leagues and is a valuable stash at the end of your bench.

Add Mason and be patient to reap the benefits.