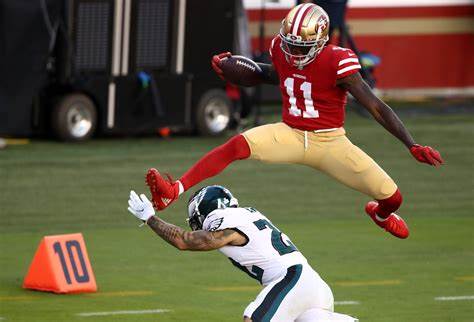 Be aware of some of these WR-CB matchups.

It’s Week 1! The Buffalo Bills and the Los Angeles Rams are prepared to tussle in a potential Super Bowl preview showdown.

Stefon Diggs was still a strong play despite the worry of the Jalen Ramsey effect.

Ramsey isn’t the same corner he was two to three years ago. He just isn’t. Last season, Ramsey shadowed only around 60% of the time. Last season, the Rams allowed the eighth-most fantasy points to WRs. Take that freebie to the bank.

Brandon Aiyuk vs the Chicago secondary

We’ve already seen enough during the preseason to render judgment. The Bears are a very, very bad football team. Sorry Bears fans. We at the Roto Street Journal are quick to eat crow and admit we are wrong when we are wrong so feel free to call us on it if we’re wrong!

With that being said, the Bears’ defense looks extremely vulnerable and the Trey Lance era looks like it’s ready to go nuclear.

With strong training camp news surrounding the Lance-Aiyuk connection and his strong finish to the season, Aiyuk is a high-upside play this week.

In 2021, Smith was targeted on 20% of his routes and averaged 1.77 yards per route run. He was a staple of the passing offense, as his 37.5% market share of air yards led rookie receivers last year and his 22.7% target share ranked third.

Smith primarily lined up on the left side in 2021 (47% of his routes) and scored 0.37 fantasy points per route. He projects to face a healthy dose of Jeff Okudah, who has had a slow start to his career, only playing 10 games through his first two seasons.

With most of the coverage dedicated to stopping Brown and defenses also having to focus on keeping Jalen Hurts from gashing them on the ground and in play action and Dallas Goedert eating them alive up the seams, there projects to be plenty of soft spots for Smith to exploit.

Thielen was heavily reliant on touchdowns in 2021, scoring 0.8 touchdowns per game. Despite missing four weeks last season, Thielen ranked tied for sixth in receiving touchdowns with 10.

His touchdown rate has masked a steady decline in efficiency over the last five years. Thielen’s yards per route run production tells the story the fantasy finishes don’t from 2017 to now:

Thielen’s efficiency has steadily dropped from elite to good to serviceable over the last five years. Honestly though, who is surprised? He’s 32 years old and obviously past his prime.

With arguably the best secondary and one of the best defenses in the league in 2022 as a Week 1 opponent with a brand new offensive system and coaching staff, it’s reasonable to expect Thielen to struggle.

Elijah Moore was borderline unstoppable before his rookie season ended due to injury. Moore was targeted on 25% of his routes, second only to Kadarius Toney among rookie wide receivers. He averaged 1.75 Y/RR but commanded 30.6% of the Jets’ air yards.

From Weeks 8 to 12 last year, Moore was pacing for 95 receptions for 1,333 yards and five touchdowns on 153 targets. He’s also been the talk of Jets camp this offseason and has emerged as the clear WR1, ahead of Corey Davis, Braxton Berrios, and Garrett Wilson.

Still, even with savvy veteran Joe Flacco starting in place of the injured Zach Wilson, Moore projects to have his hands full with the likes of Marcus Peters, Kyle Fuller, and Marlon Humphrey.

Moore could still see enough target volume to merit flex consideration. However, this game projects to be a bloodbath as the Jets could easily get run off the field early.