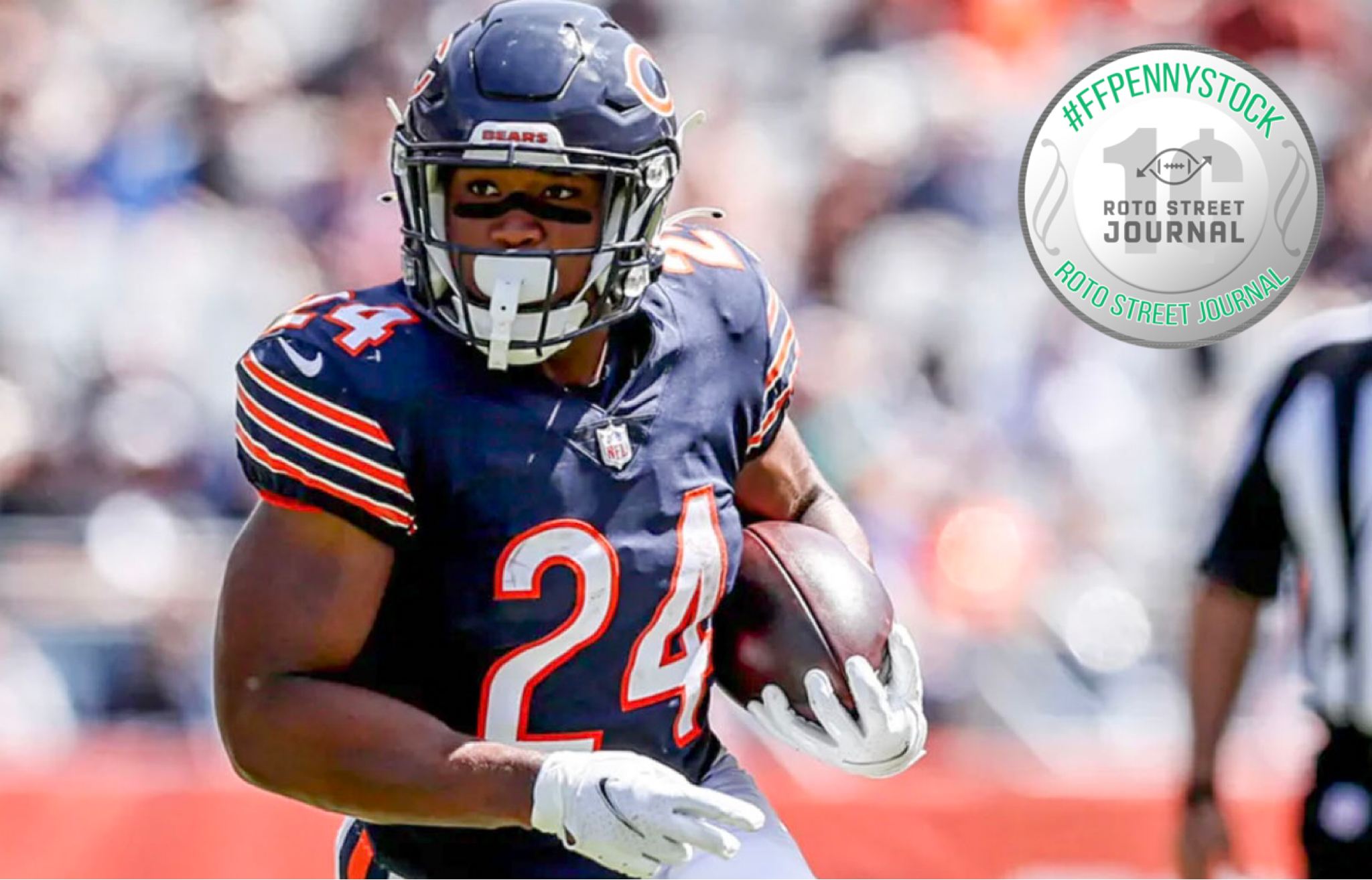 There has been an unfamiliar air of optimism surrounding the Bears offense this summer after the departure of Matt Nagy and the hiring of head coach Matt Eberflus and OC Luke Getsy.

The implementation of a Shannahan-style offense has many fantasy owners eyeing guys like Justin Fields and Darnell Mooney (The Wolf’s QB18 and WR31, respectively) as potential value picks in the mid-to-late rounds. Early on, Getsy has also emphasized the importance of a strong running game to the development and ultimate success of their young QB1.

David Montgomery still has the RB1 spot locked down for the time being, but he’s entering the final year of his contract and the team has made no indication that he’s in their future plans. New GM Ryan Poles is coming off a 13-year stint with the Chiefs, who rarely dole out second contracts to RBs, so it stands to reason that the team may use this year to shore up their RB options for 2023 and beyond. And that’s where Khalil Herbert comes into play.

Herbert first ascended into fantasy relevance in Week 5 last year after a knee strain forced Montgomery to the sidelines. Over the next four weeks, Herbert averaged just under 22 touches per game, topping 100 total yards twice and coming in as the RB18 in that span with 13.45 PPR PPG. This was all with just one TD scored in those four games, as the Bears went 1-3 in this stretch and failed to put up more than 22 points in any of the games Herbert started.

Ideally, the offense improves as a whole in 2022, and Herbert is put in a better position to find the end zone and add to his already intriguing value.

Owners who scooped up Herbert heading into Week 5 hoped his production would lead to more opportunities when Montgomery returned, but that wasn’t the case at all — in the team’s final nine games, Herbert never amassed more than five touches in a game, scoring just one more TD and averaging 2.7 PPG to close out the year.

The hope for 2022 is that a combination of Montgomery’s uncertain future and a new regime with new priorities leads to a more balanced Chicago rushing attack.

Last year’s numbers make it clear that if Montgomery misses any more time, Herbert immediately becomes an intriguing RB2 option for the duration of Montgomery’s absence. But finding value in handcuffs goes well beyond injury replacements.

Montgomery has missed a good chunk of time in the preseason with an undisclosed injury that the team has stated will not be a long-term issue. Regardless, his absence has opened up Herbert to own a huge portion of first-team reps, including playing exclusively as the RB1 in Chicago’s last preseason game. The Bears offense has looked abysmal so far in the preseason, and Herbert hasn’t done much to change that, but his experience with the first team bodes well for a share of the carries once the regular season kicks off.

In the run game, many believe Herbert to be a much better fit in Getsy’s outside-zone scheme than Montgomery, giving merit to the potential of a true committee approach with two lead backs. While a committee is never ideal for fantasy purposes, it does give Herbert the opportunity to show his value early in the season and potentially move up the depth chart as the year goes on. Regardless, ground game expectations should be kept in check for both backs as Chicago will trot out arguably the league’s worst offensive line in 2022.

Where Herbert could really separate himself is in the passing game. Chicago’s new system should feature a lot of pre-snap motion, play-action, bootlegs, and quick, easy reads for Fields. Nagy’s regime refused to alter their offensive system to match the skillset of their quarterback, but Eberflus and Getsy have likely learned from those mistakes and will implement an offense that brings out the best of their top players.

Provided he gets his fair share of snaps, Herbert should benefit from a lot of quick passes and YAC opportunities, ultimately making him a potential weapon in non-standard scoring leagues.

Another name to keep an eye on in this backfield is rookie Trestan Ebner, a pass-catching back and return specialist that Chicago nabbed late in the sixth round out of Baylor. He’s still very raw as a runner, but figures to be at least a minor factor in the passing game, especially if Montgomery misses time.

As it stands now, Montgomery is The Wolf’s RB20, 30 spots ahead of Herbert. A lot still needs to shake out as we approach Week 1, but with Herbert’s current Underdog ADP of 153.2, he could end up being a huge value add late in many drafts.