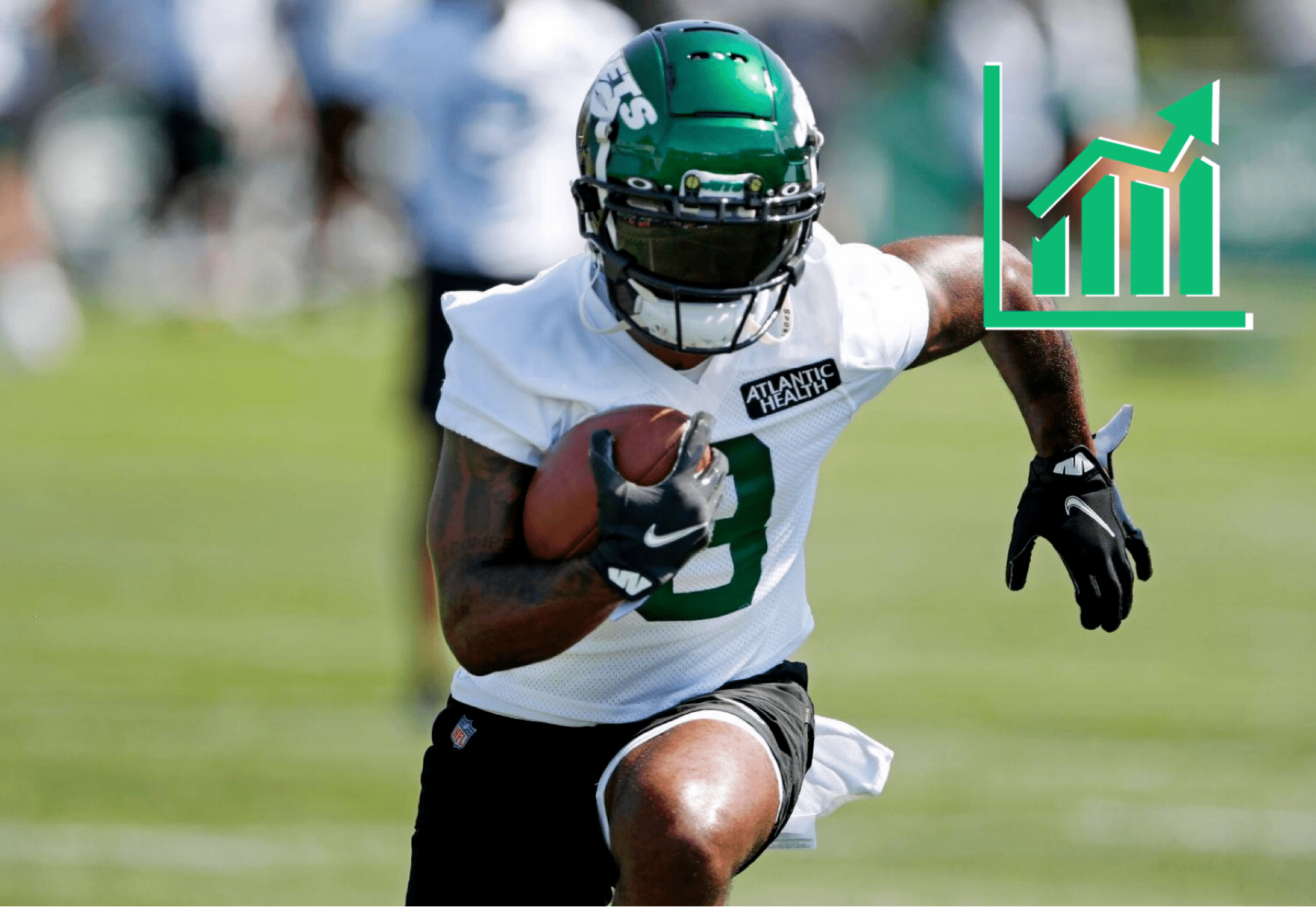 Elijah Moore is primed for a year-two breakout.

Elijah Moore was one of the most talked about rookie wide receivers during training camp last season. The receiver out of Ole Miss made an immediate connection with Zach Wilson and the duo was hyped up throughout the preseason. However, during the regular season, the two didn’t elevate that connection as Moore started his breakout while Wilson was injured and then Moore’s season was cut short after a Week 13 injury.

Moore’s preseason hype train revved its engine again during his second training camp with Jets beat reporters raving about the sophomore wideout — who reportedly has a hold on the team’s WR1 spot.

“Moore continues to be one of the Jets’ stars of training camp, no matter who is throwing him the ball,” Zach Rosenblatt reported. “He seems to make at least one big play every practice. Tuesday, his best catch was on a back shoulder throw from Flacco during 7-on-7 when Moore had to come back to the ball and caught it with one arm. If it was in question, Moore seems to have firmly established himself as this team’s No. 1 receiver. He’s in line for a big year.”

So, what can we expect from Moore in his second season? Let’s take a look.

In what may have been the worst offense in the NFL last season, Moore was lightning-in-a-bottle for the Jets. From Week 7 to Week 13, Moore never saw fewer than six targets in a game and scored five touchdowns during that stretch. The rookie wide receiver put up WR1 numbers with the likes of Mike White, Josh Johnson, Joe Flacco, and two games with Wilson.

From Week 9 to 13, Moore was third in PPR fantasy points per game behind only Cooper Kupp and Justin Jefferson — decent company to be in. Moore completed his 11-game rookie season as the WR35 and WR28 in points per game.

SINK OR SWIM WITH WILSON

Zach Wilson’s rookie year did not go as planned. The rookie finished with a 3-10 record and threw 11 interceptions to just nine touchdowns. Even Prior to his Week 6 injury against the Patriots, Wilson never looked confident behind center.

When in a clean pocket, Wilson was able to show his arm talent, completing 67 percent of his throws for 1,755 yards. The Jets didn’t have the talent or offensive line to protect and develop Wilson to his full potential last season. With the continued development of Moore, the addition of rookies Garrett Wilson and Breece Hall, and tight ends CJ Uzomah and Tyler Conklin, Wilson has a much-improved weapons cabinet to work with.

The biggest question for his success now is the offensive line, which looked putrid the last few days of camp and might’ve lost left tackle Mekhi Beckton to yet another knee injury.

So far, Robert Saleh has been pleased with Wilson’s training camp.

“Today I felt like he had a really nice day just running the offense and showing a lot of accuracy, he got the ball where he needed to,” Saleh said. “I know he missed one on the sideline to (Wilson) when Sauce was there but otherwise I know he had a really good day. He’s going to continue stacking days and the more comfortable he gets with the scheme, the more you can see his athleticism and his arm talent. He’s getting better.”

If the Jets can address their offensive line issues over the next few weeks, Wilson has a chance to shine when given time to let Moore separate and beat man coverage.

YEAR 2 BREAKOUT ON THE HORIZON?

There are many questions about Moore’s brief rookie year success. But, what he did in the limited opportunity he had last season shows the potential he has for a major sophomore season breakout.

Per RotoViz, year-two receivers have had one of the biggest advantages in fantasy football. From 2001 to 2018, 34 wide receivers broke out during their second season. Of those 34, nine were second-round picks. Moore’s rookie season metrics and second-year breakout potential compare best to Brandin Cooks. A comparison that should be looked at highly as Cooks has been the poster child of fantasy consistency during his career.

“When you look at guys like Elijah, he doesn’t care who’s surrounding him. He’s going to give everything he’s got every time,” Saleh said.

If Moore’s continued development plays out on the field his current Underdog Fantasy ADP of 65.2 will be a great mid-round steal as a second-year breakout receiver. Look to take Moore in the sixth round of your drafts with confidence and send out some trades in your dynasty leagues to see if you can add him to your squad.

Take advantage of Moore’s ADP in Underdog Fantasy. Download the Underdog Fantasy app, use promo code RSJ or click the link, get a 100% first deposit match up to $100, and dominate their season-long best ball tournaments.