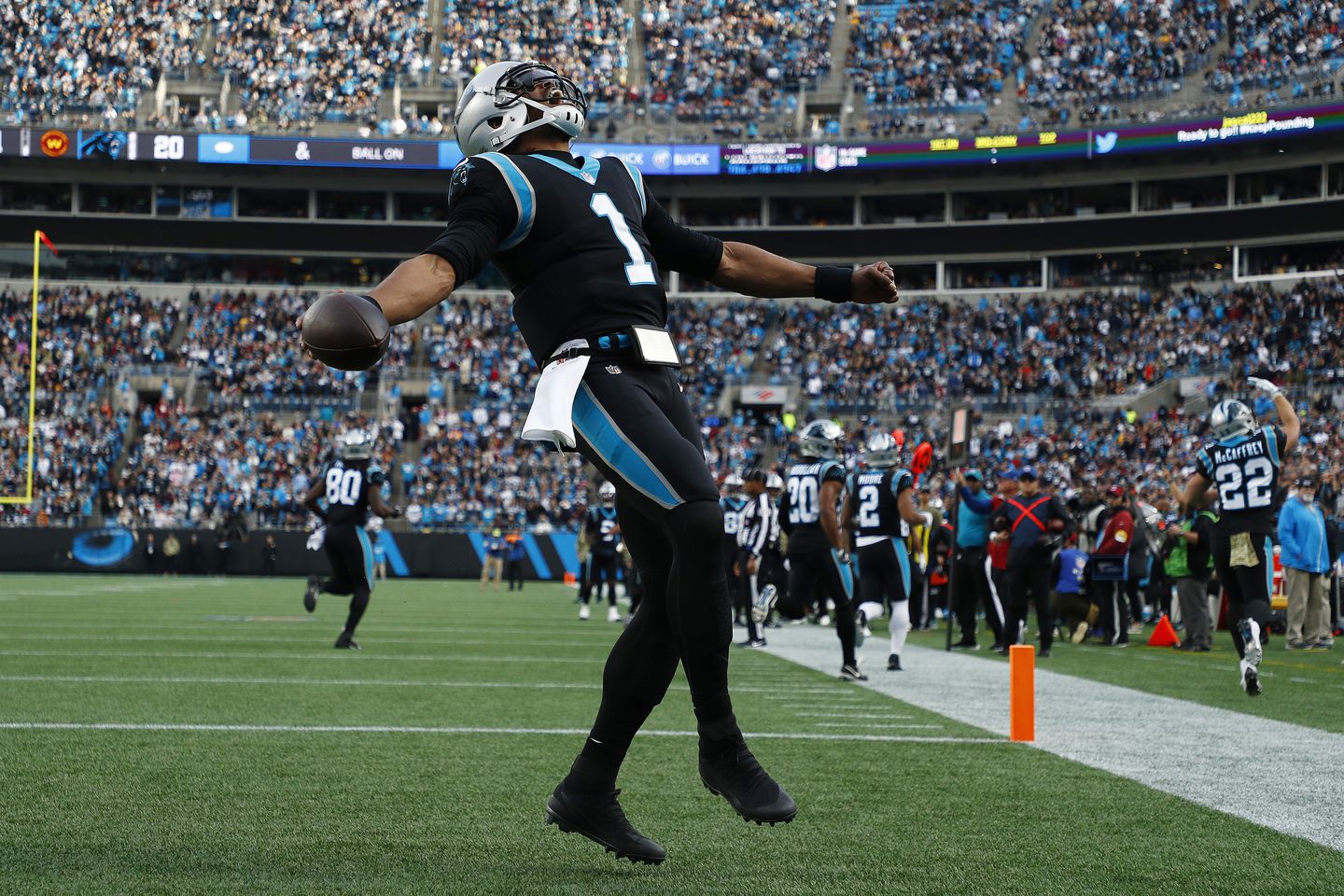 Cam Newton and Ty Johnson could be stretch-run heroes.

Welcome to the Fantasy Football Week 12 Waiver Wire: Start, Stash, Stream, where we break down the fantasy football free-agent landscape and give you the best picks for the short and long haul.

Let’s look back at Week 11 and see our future prospects for the fantasy football Week 12 waiver wire.

While the box score numbers may not pop out at first glance, Cam Newton’s fantasy numbers surely are. The former MVP threw for 189 yards and two touchdowns and added another 46 yards and a score on the ground during his first start this season. Newton will always have rushing upside when healthy, especially as a goal line force. He finished with 26.16 points this week and will definitely start again against the Dolphins this week.

The loss of Jets RB Michael Carter opens the door for pass-catching back Ty Johnson over the next two to three weeks. Carter had a stronghold and grasp of the RB1 role in New York, while Johnson would occasionally mix in for some work here and there. Tevin Coleman had been rendered useless, although he may now get some early-down work. However, with little receiving upside, the Jets back I’d want to have rostered now would be Johnson, for sure.

Robby Anderson has benefitted greatly from the return of Cam Newton. Anderson has seen six targets in back-to-back games with Newton under center. The prior connection with Sam Darnold just wasn’t there and now Anderson is seeing more looks from Newton in a rejuvenated offense.

Injuries have kept him out most of the year, but when active, Sterling Shepard has gotten lots of attention and targets from Daniel Jones. The Giants struggled to move the ball on Monday Night Football without him and the whole offense just seems to run better with him lined up on the perimeter.

Van Jefferson’s terrific sophomore season was set to end abruptly once the team signed Odell Beckham Jr to lineup alongside Cooper Kupp and Robert Woods. However, that was until Woods went down with a torn ACL. Now, Jefferson should be the Rams’ WR2 or WR3 based on Beckham Jr.’s questionable current talent and his grasp of the offense. Jefferson has turned into Matthew Stafford’s deep threat and could even be a weekly flex option in that explosive offense.

After many low-level performances, Rondale Moore picked himself back up with an 11-51 day on 11 targets. The low receiving yardage is a bit concerning, but Moore is known to catch short passes and make the most out of his playmaking and YAC abilities. With Arizona on a bye and Kyler Murray likely returning, the Cardinals’ offense should take a step forward towards their early-season numbers.

The Texans have had the most disgusting backfield throughout the season, but it’s starting to gain some clarity. The team released Phillip Lindsay on Tuesday morning, which leaves Rex Burkhead and David Johnson to carry the load. Burkhead led the backfield last week with 18 carries, while Johnson had 13 of his own. Will either do much to be a consistent fantasy option? Probably not. But the volume will be there for both backs.

The Atlanta offense was a hot mess on TNF against the Patriots. But while Calvin Ridley has been sidelined due to his personal reasons, Russel Gage has stepped into a larger role for the team. With Kyle Pitts seeing a boatload of double-coverage, Gage has seen 25 targets over the last four games.

Kendrick Bourne is fighting for the distinction of top receiver for Mac Jones and the Patriots’ offense. Bourne caught another four balls for 42 yards this week — which led the team. Bourne has been pretty consistent all year and with the Patriots entering their toughest stretch of the season, it’s likely they’ll be asking more from the passing game moving forward.

After hyping up Dan Arnold last week, the tight end put up a goose egg. The Jags also lost Jamal Agnew for the year as the team continues to be depleted of pass catchers. I’ll go to my grave believing in Laviska Shenault’s talent, so I’m guessing he has to receive some kind of target share increase here. Who else can Trevor Lawrence throw to?

Leading the team in receiving and tied for most targets, Tre’Quan Smith was a lone bright spot for the Saints offense this week. Smith caught five of eight targets for 64 yards and could climb even higher with Adam Trautman lost for multiple weeks.

After being a non-factor for basically the entire season, MVS aka Marquez Valdes-Scantling turned in a great game going for 4-123-1 on 10(!) targets. The 75 yard touchdown bomb really helped his line here, but the sheer number of targets in Green Bay’s offense is enough to provide fantasy value. With nobody really stepping up alongside Davante Adams, perhaps MVS can moving forward.

Miles Sanders returned from the IR this week and assumed RB1 duties, but backup Jordan Howard went down with an injury. This means Boston Scott should continue to be second in line going forward. While Jalen Hurts continues to be a beast on the ground, Sanders has an injury history and Scott has always been known to vulture some scores at the goal line.

Lost among the rubble of Buffalo’s beating this past Sunday, the emergence of Matt Breida is something to keep an eye on for the Bills moving forward. The team has had little to no running game presence all year and now Breida has had back-to-back decent performances. He only had five carries this week but went for 51 yards (10.2 ypc). He’s looked much more explosive than either Devin Singletary or Zack Moss, so maybe Breida pushes for more time in Buffalo.

Fresh off an upset of the Titans, QB Tyrod Taylor gets to face the Jets in Week 12. Taylor’s rushing upside keeps him on fantasy radars, especially when he falls into a plus matchup this week.

Cowboys receiver Cedrick Wilson is looking at a full plate this Thanksgiving after Amari Cooper has already been ruled out and CeeDee Lamb is also trending towards being out with a concussion. Michael Gallup will slide into the No. 1 role, but Wilson has shown up randomly throughout the year amongst a loaded receiving core. Now, he’ll have his likely biggest target share to date.

The Taylor Heinicke magic carries on as the QB threw for 206 yards and three scores this week against a tough Panthers defense. Now, Heinicke looks to keep it moving against the Seahawks on MNF. A nice pickup if you want the last guy going in your matchup to try and win from behind potentially against a struggling team and defense. Heinicke has the hot hand.

With Allen Robinson out last week, Darnell Mooney was an absolute target vacuum. Right behind him though was Marquise Goodwin who finished with 4-101-1 on 8 targets. With a quick Thanksgiving turnaround, Goodwin could be in line for WR2 duties again for Andy Dalton.

With Julio Jones out with injury, many expected AJ Brown to be the big guy this week against the Texans. But after injuring his hand, Nick Westbrook-Ikhine was the guy who put up big numbers. Westbrook-Ikhine caught seven of his eight targets for 107 yards. Facing the Patriots this week, you know Bill will look to take away AJ Brown and have the rest of the Titans try to beat him. That would mean more looks for NWI (I’m too lazy to type that out, it’s late) this week, presumably.

The Eagles are starting to heat up on both sides of the ball and the Philadelphia Eagles DST is in for a prime matchup against the turnover-prone Giants. Last week, the Eagles’ defense sacked Trevor Siemian three times, picked him off once, and returned one of those interceptions for a touchdown. Expect two or three turnovers against Danny Dimes this week.