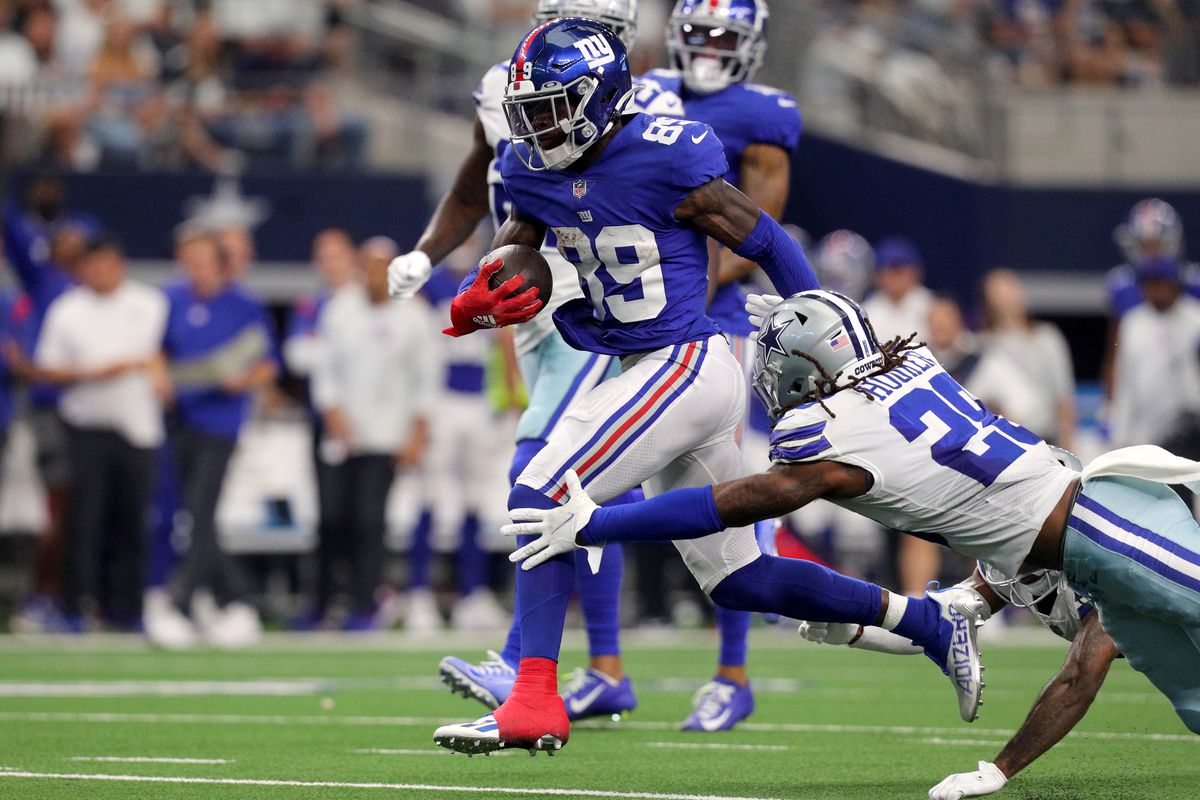 Welcome to the Fantasy Football Week 6 Waiver Wire: Start, Stash, Stream, where we break down the fantasy football free-agent landscape and give you the best picks for the short and long haul.

Let’s look back at Week 5 and see our future prospects for the Fantasy Football Week 6 Waiver Wire.

Giants rookie Kadarius Toney was flying all over the field in Week 5. Toney finished with 10 catches for 189 yards on 13 targets. The injuries to Sterling Shepard and Darius Slayton elevated Toney’s target share, and now this week the Giants will likely be without Kenny Golladay and Saquon Barkley. The rookie is electric and he should see a large chunk of the aerial pie moving forward.

With Clyde Edwards-Helaire leaving the SNF game early with a knee injury, Darrel Williams took over as the RB1 for the Chiefs. This prolific offense provides value to most starting players, and while CEH hasn’t lived up to the huge RB1 potential placed on him, Williams getting the starting nod is valuable enough for high waiver consideration.

While the Raiders offense has struggled, Hunter Renfrow has been a consistent and reliable pass catcher for Derek Carr. Darren Waller will always be the top dog, but Renfrow is averaging roughly eight targets a game this season. This past game, he led the team in receptions and yardage. While he may not have a super high ceiling, Renfrow has an extremely high floor, especially in PPR leagues.

There’s no denying how electrifying Rondale Moore is on the football field. The Cardinals are doing more and more to work him into their offense as he carried the ball three times for 38 yards and added five catches for 59 yards. Moore is arguably the second most talented skill player in this offense behind DeAndre Hopkins, so as Moore continues to get acclimated to the NFL, the Cardinals will get him more involved.

Once again the leading receiver for the Chicago Bears, Darnell Mooney led the team with 35 receiving yards (gross) on five targets. The Bears got up early in this one and relied on their running game and defense to carry the load instead of having Justin Fields air it out. Mooney has been putting up better numbers than Allen Robinson though while commanding a larger piece of the target share.

While the Patriots’ offense hasn’t exactly been flourishing, the chemistry between Hunter Henry and Mac Jones is growing. Henry has scored in two straight games and also led the team in targets, catches, and yards in Week 5. Henry also seems to be their best red zone pass-catcher, so as this offense continues to develop, Henry should benefit a good amount.

Tim Patrick, one of the least sexy players in fantasy football, is continuing to deliver quality performances in Denver. This week, Patrick put up seven catches for 89 yards on nine targets. The absence of Jerry Jeudy has allowed Patrick to play a bigger role this season, and while that’s still the case, he’s a very reliable WR3.

Believe it or not, Samaje Perine out carried Joe Mixon 11-10 in Week 5. He also caught four balls, one of which was a touchdown, so he’s been creeping into Mixon’s previously absurd usage rate. Mixon has an extensive injury history, so while Perine starts eating into his touches, he’s a solid bench stash should any of Mixon’s previous injuries flare up again.

Preseason darling Marquez Callaway turned in another nice game today with four catches for 85 yards and two scores. One of those was a 49 yard Hail Mary that no Washington defender tried to jump up and bat down, but Callaway’s eight targets are encouraging. The only reason I’m not higher on him now is the impending return of Michael Thomas.

Patriots rookie Rhamondre Stevenson was made active this week, taking JJ Taylor’s spot in the lineup. As a result, he carried the ball 11 times for 23 yards (gross). Damien Harris also left the game twice with a chest injury and he did not return.  If Harris is shelved for some time, Stevenson would be the best guess to take over RB1 duties, because I am SICK of seeing Brandon Bolden touch the ball. He could enter ‘Streamer’ territory if Harris misses Week 6.

The extent of the injury to Chris Carson is unknown at the moment, but there is potential he misses more games for Seattle. In that case, Alex Collins is the Seahawks’ RB1. He had 15 carries last game against the Rams and would be a valuable RB2/Flex play for those hurting with RB depth.

The rookie receiver out of USC now has back-to-back games of eight targets in Detroit’s offense. With the team struggling to find consistent play from their pass catchers, Amon-Ra St. Brown looks to be putting his name into the ring as the top WR option. Lord knows the Lions won’t be playing from ahead often, so the passing game should be throwing often.

It’s really hard to trust someone as inconsistent as David Njoku, but here we are. Njoku blew up in Week 5, snagging all seven of his targets for 149 yards and a score. He’s been invisible since Week 1, but maybe the athletic specimen will be utilized in an offense that’s been begging for perimeter playmakers. The floor is extremely low, yet the ceiling is high.

Saquon Barkley left the game with a sprained ankle, leaving Devontae Booker as the RB1. In Saquon’s absence, Booker finished with 20 fantasy points. Snag Booker as a one or two-week streamer depending on Barkley’s length of absence.

For as bad as the Jaguars have been playing, Trevor Lawrence is not the issue. The No. 1 overall pick threw for 273 yards and a score and is also starting to use his legs. He ran in a touchdown and if he’s going to be a dual-threat down at the goal line then his fantasy stock will keep climbing. A VERY Josh Allen-lite so to speak. Next week’s game in London against the Dolphins is a plus matchup.

Despite the performance of Davis Mills and the Texans offense this week, I don’t think that’s going to be the norm for them, so the Colts should fare much better than the Patriots did this past week.

Khalil Herbert weirdly led the Bears in carries this week with 18 to Damien Williams’ 15. His 75 rushing yards were all he got though, with no work in the passing game. If Herbert’s going to keep being a factor on the ground while Montgomery is out, maybe he could be a fantasy option for those in a pinch.