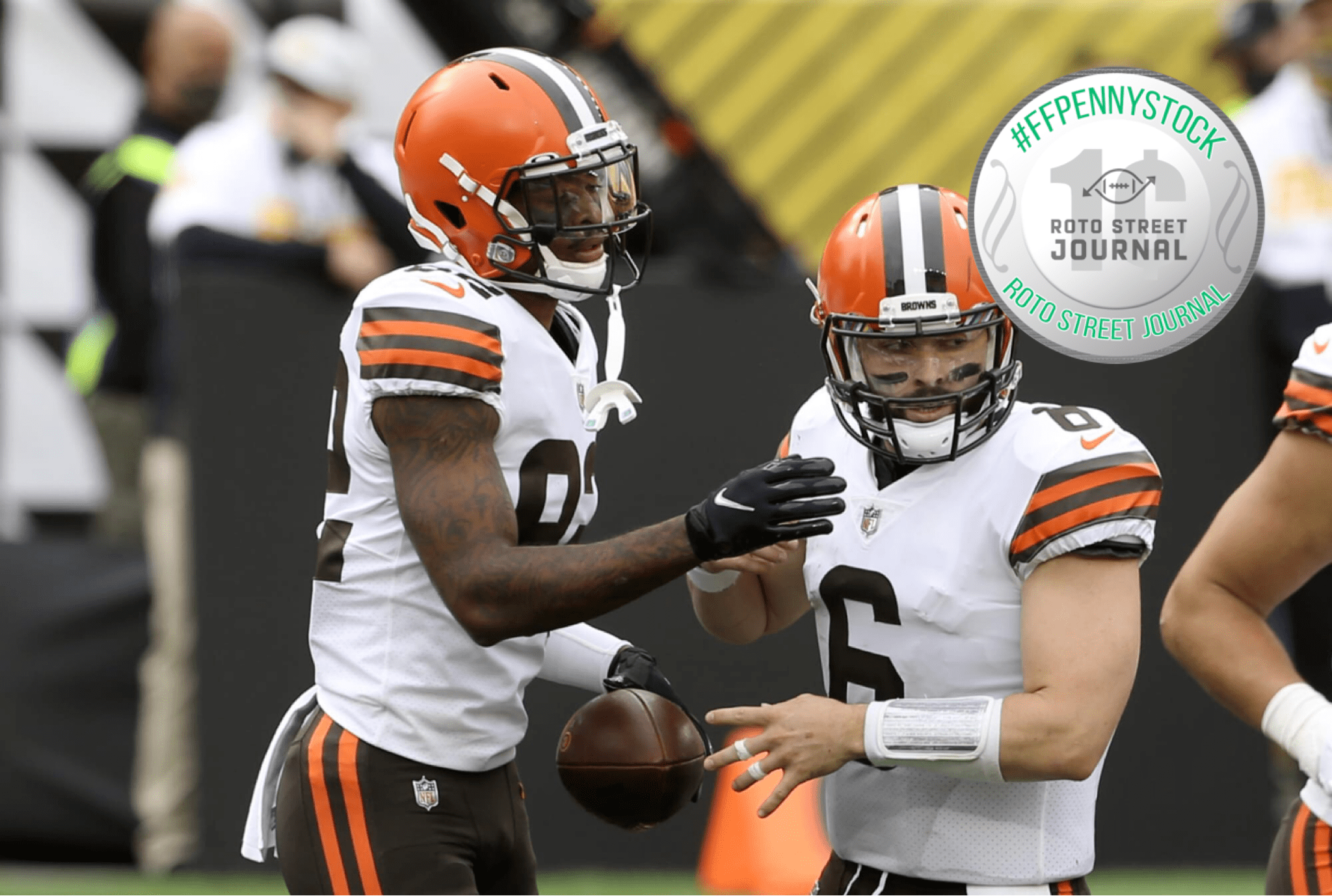 It will be smart to target Rashard Higgins and Harrison Bryant on the Week 8 Waiver Wire with Odell Beckham Jr. no longer vacuuming targets.

Odell Beckham Jr.’s season ended in a weird way in Week 7 when he blew out his knee trying to make a tackle after an errant Baker Mayfield pass. In a strange turn of events, Mayfield woke up after his 0-for-5 start to set a team record for most consecutive completions with 21 in a row and tossed five touchdowns in the process. Mayfield finished 22-of-28 for 297 yards and completed passes to six different players.

Before we dive into those two, is it okay to ask if Mayfield is better off without OBJ? If we were to ask Deshaun Watson if it’s a good thing to lose your most talented weapon, he’d say absolutely not. But, let’s look at the numbers:

Anyways, just wanted to toss that out there.

With OBJ in the locker room, Mayfield peppered Higgins to a team-leading six grabs on six targets for 110 yards.

While Higgins did succeed with Mayfield in 2018, snatching a career-high 39 balls for 572 yards and four touchdowns, he was one of the many who fell off under Freddie Kitchens in 2019.

But with the passing offense coming off its best performance and seven targets per game opening up, Higgins could slide into a steady role as Mayfield’s No. 2 perimeter option behind Jarvis Landry — who is also due for a target uptick.

What’s even better is Higgins’ quarterback has his back. When Higgins entered free agency, Mayfield vouched for him to re-sign with the Browns.

“It meant a lot to me. He basically said, ‘Why would you try to second guess? This is where you belong,’” Higgins said, adding he had other offers in the offseason. “There was no second-guessing. Let’s do this thing.”

Although Higgins had his big day without Austin Hooper in the lineup and Landry banged up, there is some real chemistry there, which makes Higgins a solid spot starter during this strange fantasy season.

The 6-foot-5 rookie out of Florida Atlantic blew up in Week 7, catching four of five targets for 56 yards and two scores.

While the tight end spot has been pretty useless in the Browns offense, Bryant utilized his pass-catching skills to make noise in the red area.

So, who is Bryant? Well, this is what the guys over at The Draft Network had to say about the tight end before the draft:

FAU tight end Harrison Bryant enters the NFL after producing monster numbers for a tight end in 2019. As a versatile receiving option that can execute from a variety of alignments, Bryant is appealing. He has enough athletic ability, route running technique and ball skills to create so matchup problems. His blend of ball skills and ability to create after the catch makes him an option at all levels of the field. With that said, the traditional in-line duties of a tight end aren’t Bryant’s strong suit. You won’t catch him widening gaps in the trenches although he’s fairly effective blocking on the move. Bryant profiles as a quality TE2.

With Hooper out of action with appendicitis for god knows how long, Bryant is becoming a red-zone weapon for Mayfield after registering three touchdowns during his rookie campaign. However, once Hooper returns, Bryant will likely resume his duties on the bench.

The rookie looks like a prime streaming option for tight end desperate owners this week against the Raiders.

Prior to their Week 9 bye week, the Browns will play the Raiders. Then, they get the Texans, Eagles, Jaguars, and Titans — all of which can be beaten through the air.

Although Mayfield just set the world on fire, Nick Chubb should return around Week 10, which will likely put the shackles back on the passing game. This means Higgins will be a streaky, boom-or-bust wideout but will remain in the starting lineup alongside Landry in their two wide receiver sets.