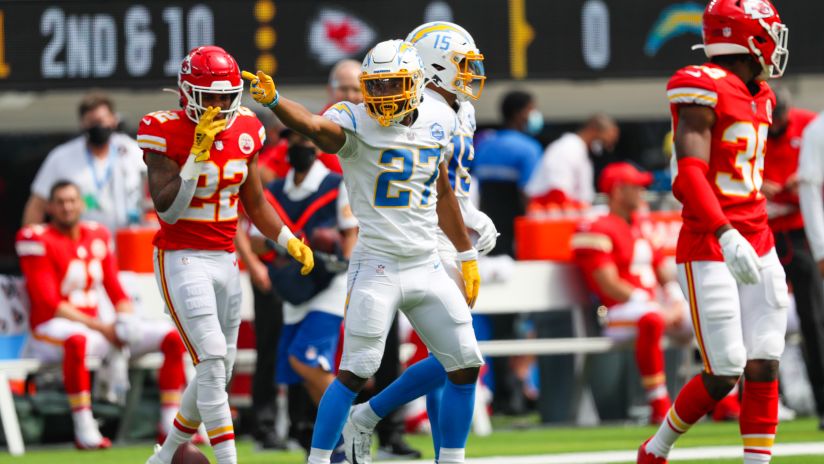 A barrage of injuries has made the Week 3 Waiver Wire even more crucial than ever before.

Welcome to the 2020 Fantasy Football Week 3 Waiver Wire: Start, Stash, and Stream, where we break down the fantasy free agent landscape and give you the best picks for the short and long haul.

We have our three groups of ‘starts’ ‘stashes’, and ‘streams.’ The starts can be inserted into your lineup immediately, the stash guys add depth to the end of your bench and can provide longer-term benefits, and the streamers are generally D/ST’s and QBs that are matchup dependent.

So let’s look back at Week 2 and see our prospects moving forward for the Week 3 Waiver Wire. 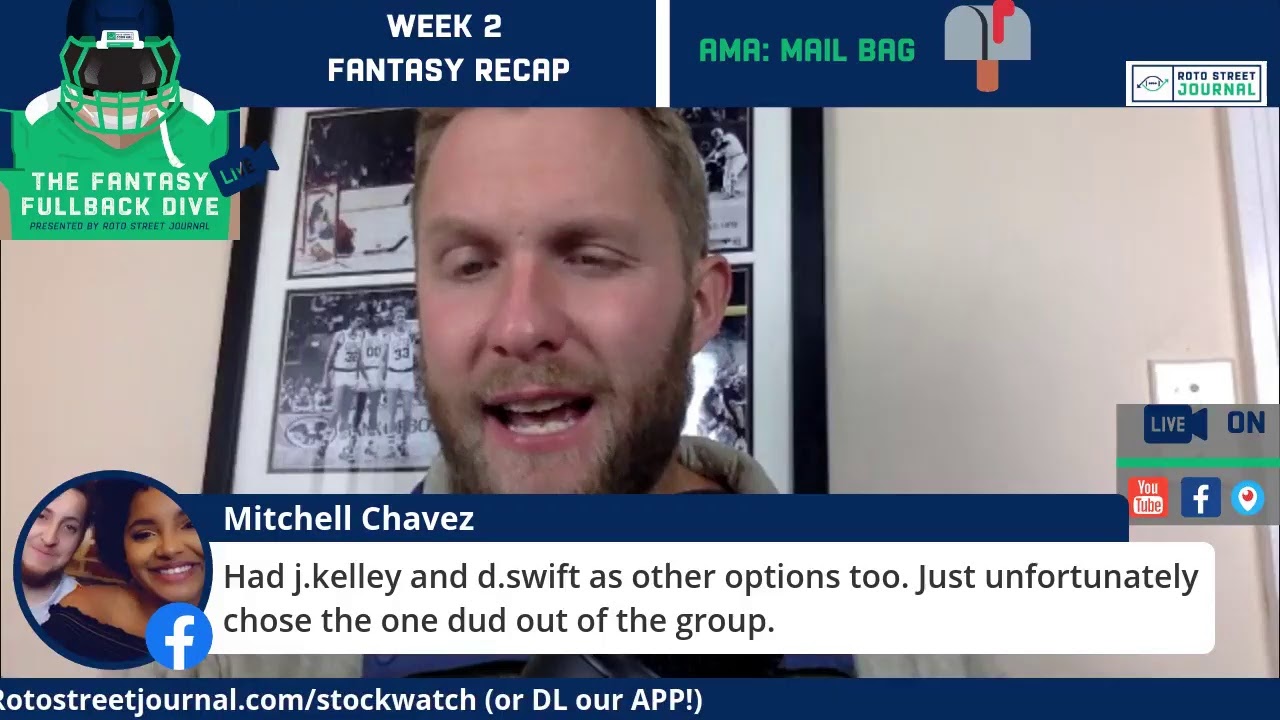 Note – Ownership % based on Yahoo and must be under 50% owned

Surprised this ownership percentage is this low, but Joshua Kelley needs to be owned in all leagues now. Nearly split even reps with Austin Ekeler 43/47 (advantage Ekeler), but out-touched Ekeler in the process. Kelley finished with 64 yards on 24 carries and added 2 receptions for 49 yards. He’s played a big role in the offense thus far and is seemingly getting a downgraded version of the Melvin Gordon role in the Chargers offense.

Injuries to both Raheem Mostert and Tevin Coleman will keep them out of action in Week 3. Enter Jerick McKinnon, who we touched upon in one of our stock watch articles. Wolf has been preaching about getting McKinnon on your rosters since the pre-draft process, but if he’s still there, he’s a must-add. He figures to play a large Week 3 role, and even going forward he’s made his mark in both games the Niners have played this year, so his role will only increase with Mostert and Coleman sidelined.

With Cam Akers banged up, Darrell Henderson is currently the hot hand Sean McVay will look to ride going forward. We waited all 2019 for Henderson to start supplanting Todd Gurley, but it never happened. Now Henderson got his shot in Week 2 and he took full advantage of the opportunity. He outperformed Malcolm Brown heavily on the day and is in position to be the Rams RB1 for the time being.

Through two weeks, the Falcons have put on a passing clinic and Russell Gage is taking full advantage of the extra looks coming his way. On the field for nearly every snap in the slot, Gage racked up a 6-46-1 stat line on 9 targets and would have had a 40-plus yard touchdown PASS to Julio Jones that was dropped. The combination of an awful defense and poor running game has forced a pass-heavy game script for Gage and the Falcons offense.

One of the worst parts of Week 2 was the loss of Christian McCaffrey for 4-6 weeks. Enter Mike Davis, who will be looked upon to shoulder the load. His receiving work in Week 2 was very promising as one of Bridgewater’s top targets, coming down with all eight of his targets. Between his projected lead rushing work and dump off receiving game, he could be a great emergency RB2 or flex play to those riddled with injuries.

Currently sandwiched between Patrick Mahomes and Lamar Jackson in scoring, Ryan Tannehill is quietly having himself another great season. He finished as the QB3 in overall scoring once he took over the starting gig last year and just put up 26 points in Week 2 without AJ Brown. Sure it was against the Jags, but Tannehill has done nothing but succeed and show that he’s got what it takes to be a starting fantasy QB.

Gardner Minshew continues to sling the rock for a surprising Jaguars team and put up back-to-back 20-plus point fantasy days. He’s throwing lots of touchdown passes to keep up with all the points the Jags give up on defense and he’s done a great job of spreading the ball around. Plus, he has a cake schedule on the horizon with Miami and Cincinnati waiting in the wings.

Former fantasy darling Devonta Freeman was scooped up by the New York Giants in light of the Saquon Barkley injury on Sunday. Freeman will come and in likely inherit the RB1 role as Dion Lewis isn’t really a lead back kind of guy. The Giants run game had been struggling all year, but Freeman’s workload is likely to be good enough to provide emergency RB2/Flex numbers for those massacred by the Week 2 injury bug.

Despite the additions of Matt Breida and Jordan Howard in the offseason, Myles Gaskin has been the one dominating the snaps by a large margin. While he hasn’t pulled away in terms of the rushing production or goal-line work, his receiving work has made him a fantasy asset as the RB1 in Miami. If his role continues to grow moving forward, we could be looking at a hidden gem stashed deep in the waiver wire.

With the Eagles offensive line healing and patching itself back up, these Philly wideouts have some potential as Wentz has been throwing deep often this year. DeSean Jackson and Jalen Reagor are the main targets alongside the stud tight end duo in Philly. However, Reagor offers more upside due to Jackson’s extensive injury history.

Former first-round pick N’Keal Harry is lucky that one of his biggest fans happens to be his new QB Cam Newton. The Patriots offense is starting to open up, and Harry has been getting a lot more work in the receiving game. A number of his catches have gone for short yardage, but you’d have to think they’ll get him going downfield. Edelman will always be option A, but Harry just cashed in an 8-72-0 game on 12 targets in the shootout in Seattle.

If the Washington Football Team offense and Dwayne Haskins were a bit better, Logan Thomas would find himself up in the Start territory. The snap count and target share for Thomas have been exceptional, but he’s only converting just under 50 percent of his targets. Haskins and Thomas need to do a better job of connecting if Thomas wants to be an every-week TE1. Thomas is getting close, as Washington has so few weapons on offense.

The leading wide receiver in Green Bay’s offense in Week 2, Marques Valdez-Scantling finds himself in the waiver article once again only this time Davante Adams is looking at potentially missing some time with a hamstring issue. Rodgers has been great early, and if Adams is indeed out, then MVS will have a lot of slack to pick up operating alongside Allen Lazard. These two will be Rodgers’ weapons of choice every time Aaron Jones doesn’t touch the ball.

Another tight end, Dalton Schultz, made the most of his first start after Blake Jarwin was lost for the year. The shootout against Atlanta was a great game script forcing Dallas to throw nearly all game, resulting in a 9-88-1 line on 10 targets. The Cowboys offense still has Amari Cooper, CeeDee Lamb, Michael Gallup, and even Zeke Elliott to feed, but Schultz looked like a great check-down weapon that Dak was able to find so many times.

We mentioned Minshew up in the Start category, but Keelan Cole has quietly but together quality back to back showings scoring a touchdown in both games. He’s been working well in the red zone and clearly is showing chemistry with Minshew. Obviously, he’s not going to score every game, but he’s playing the second-most receiver snaps behind DJ Chark and is routinely at the top of the target tree.

Another week, another appearance for late-round darling Laviska Shenault of the Jags. He’s a bit unusual in terms of his usage, but the team clearly values his talent and has plans for him. He’s gotten four targets in each game, while also spelling James Robinson for a few carries each game. It’s tough to nail down his exact role, but he feels like a guy that could explode later on once he’s fully utilized.

The Giants brought in Devonta Freeman who is all but likely to assume the lead back role in New York. However, there’s still opportunity for Dion Lewis to make his mark in the offense. He’s a great receiving option, and it’s going to take Freeman some time to get accustomed to the offense and he hasn’t played a meaningful snap in quite some time. Daniel Jones seemed comfortable checking it down to Lewis on Sunday, that’s where his fantasy value will come from moving forward.

A third tight end! For those who saw the Thursday Night game, the injury to CJ Uzomah put Drew Sample into the spotlight and Joe Burrow was looking his way all night. Seven catches for 45 yards on nine targets was a very productive day in the limited time Sample was operating as the TE1. Burrow needed that check down guy and Sample kept finding soft spots in the defense to capitalize.

With Michael Thomas out Week 2 and dealing with his ankle injury, Tre’Quan Smith has had to take on a bigger role. He’s currently at 4 receptions for 80 yards on 5 targets so far on Monday night and is a solid piece to help open up the offense. Emmanuel Sanders has been nonexistent all game, and Smith has always had deep ball opportunity if Brees can still chuck it. Should Thomas have to miss a few more games, Smith could play an even larger role.

Rookie Michael Pittman Jr actually out-snapped and outplayed TY Hilton in Week 2 against Minnesota. The Vikings defense is atrocious and instead of a big receiving day, the team leaned heavily on Jonathan Taylor and the run game. The loss of Parris Campbell also opens the door for more Pittman opportunities after his 4-37-0 day on six targets.

After a nonexistent Week 1, Damiere Byrd was all over the place in Week 2 of New England’s offense. Brought in from Carolina, Byrd has prior chemistry with Cam Newton and primarily played as the WR2 on the outside of the offense. Against the Seahawks, he caught six-of-nine targets for 72 yards. If the offense keeps opening up, Byrd could have a larger role that rivals Harry.

A deep stash for larger leagues, Chase Claypool has been bringing down some ridiculous catches in Pittsburgh. He’s a huge target that doesn’t get on the field much, but he’s been turning heads with his limited action. The problem with Pittsburgh is there’s already so many talented pass catchers and weapons on offense before you even get to Claypool.