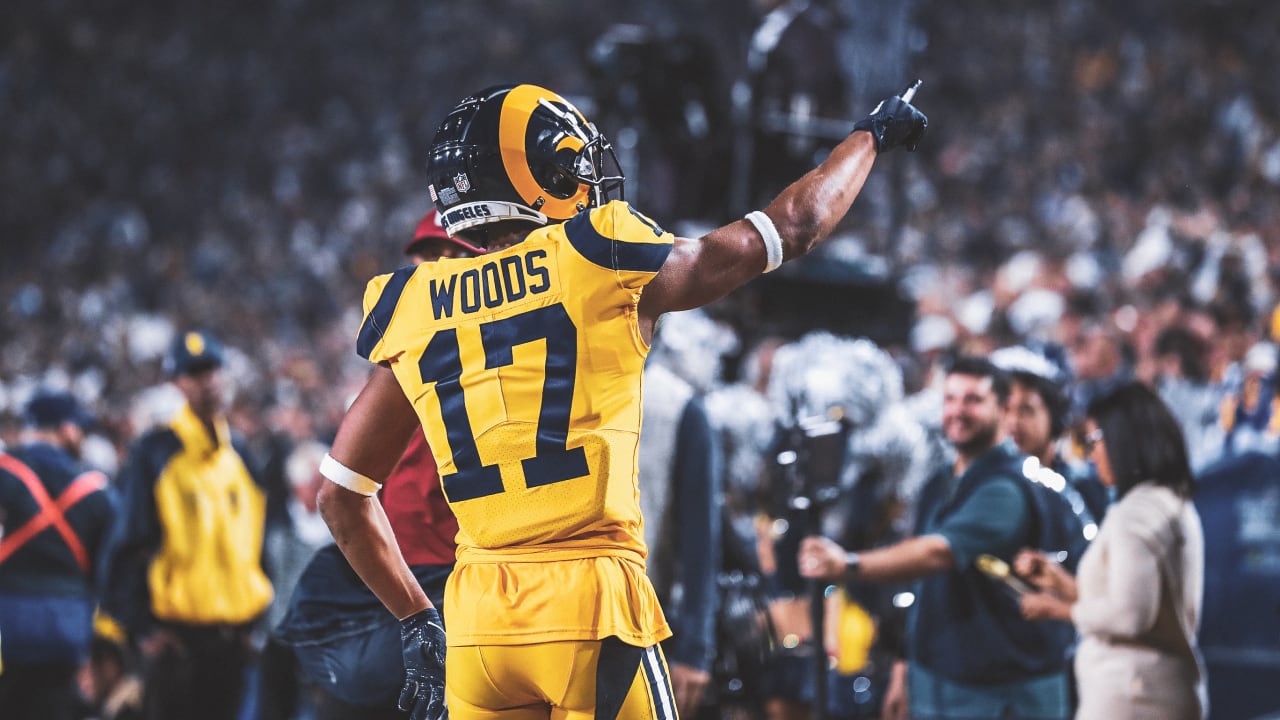 Take advantage of your near-sighted leaguemates with our Buy Low, Sell High.

Every fantasy owner is looking for their own little miracle. That doubted, slept-on guy they can get as a last round “Penny Stock” or off the waiver wire for nothing. Yet, the less glorified, but often most important way to build a fantasy championship-winner is the art of Buying Low and Selling High.

See, fantasy football is truly a stock market (hence, the name Roto Street Journal). Just like in Wall Street, the Wolves of Roto Street know exactly when to buy the right players at their lowest cost, and sell others while they’re peaking. The right trade, at the right time is often the overlooked difference between hoisting the trophy at season’s end… or watching through tears as one of your league mates does so instead.

To help you navigate the tricky fantasy trade waters, I’ll be giving you some discounted slow-starters to consider Buying Low on before they turn it around. Players who may not be lighting up the scoreboards yet, but offer future improvements in their schedule, opportunity, or team performance that owners blinded with rage may miss, all for you to steal.

On the other hand, I’ll give you the players whose values are peaking, and that you should Sell High before their true worth reveals itself. Maybe they’ve been benefited from a few cupcakes in a row. Perhaps an absent teammate is soon returning, or the schedule is about to stiffen. Regardless, selling a player at his highest value is a crucial move to boost your team’s long-term outlook.

To get our Stock Watches, Weekly Rankings and Podcast episodes directly on your iPhone, download our brand-new app in the App Store.

How does one drop 29.4 points in one game, catching 13 passes for 164 yards, and end up in the “Buy Low” section just 2 short weeks later? Well if you’re Robert Woods, you do it by following up that mammoth performance with 2 duds, most recently a 4-target, 0-catch performance in Week 6 that was only saved by his 2nd career rushing TD. Woods now has more rushing TDs than receiving TDs on the season, which isn’t a great sign considering he’s, y’know, a wide receiver. But despite these red flags, I see Woods turning it around — and soon.

Woods is arguably the most talented receiver on the Rams and will continue to be a major part of the Rams offense. And for what seems like the 10th time in the past year and a half, the Rams have now gone “all-in” for this year, trading a slew of picks for Jalen Ramsey this week. The offense is generally talented enough to overcome their arthritic RB and wildly inconsistent QB, and Woods is a big part of that. And with a juicy matchup against the Falcons ahead for Week 7, you’ll want to pull the trigger on a deal for Woods ASAP, and reap the immediate benefits.

The hype around JuJu Smith-Schuster was deafening this past offseason, with many excited to see what the talented young wideout could do with Antonio Brown out of the picture. JuJu hasn’t been terrible by any means, and a great deal of his recent struggles can be attributed to the shitshow of a QB situation in Pittsburgh, but the point remains that his value is dropping — especially coming off a 1-catch, 7-yard performance in primetime. And heading into the team’s bye week, many JuJu owners are starting to warm up to the idea of parting ways with him — and that’s where you come in.

Pittsburgh’s Week 7 bye will likely give Mason Rudolph the time he needs to return from his concussion for Week 8, when the Steelers get a great matchup with the winless Dolphins. Rudolph’s return will be a welcome sight for JuJu, whose 2 best fantasy performances this year have come with the 2nd-year QB out of Oklahoma State under center. His upcoming schedule is very middle-of-the-road from there, with matchups against the Colts, Rams, and Browns, but holding down the WR1 role with Rudolph returning is enough to make a move for JuJu worth it — especially considering where his value is at right now.

Although he suffered what appeared to be a gruesome injury making a god-awful tackle in last week’s win over the Giants, Josh Gordon appeared fine on the sideline throughout the 2nd half and has reportedly been walking around the team facility with no noticeable limp during the early part of this week. He missed practice Tuesday and may even miss this week’s game, but if anything, that will just make it easier to get him from some schlub in your league that thinks the Patriots offensive struggles are going to continue. Spoiler alert: they won’t.

4 out of New England’s next 6 games come against teams in the bottom half of the league against opposing WRs, and Gordon should be in a position to reap the benefits of those matchups. Julian Edelman will obviously be the team’s #1 and Phillip Dorsett looked great before his recent injury — which he seems set to return from very soon, for what it’s worth — but Gordon is too talented to be neglected in the passing game, and the Patriots are too smart to neglect him. And don’t worry about the young receivers on the roster just yet; they’re talented, but none have Brady’s trust just yet. Gordon does, and he should show it throughout the second half of the season.

Nick Chubb may be enjoying his “breakout” year, but the season is essentially going according to plan: a very strong first half of the year, with some question marks for the second half. Those question marks virtually all stem from the impending return of Kareem Hunt, who is eligible to play starting in Week 10. That’s not for a few weeks, but if you can get a head start now and dump him off for a solid return, you should.

Cleveland enters their Week 7 bye scoring just 20 points per game, and the offense has generally looked out of sync. And coming out of their bye, they have a tough stretch of matchups: @ NE, @ DEN, vs. BUF, vs. PIT. By the time they get to favorable matchups with teams like Miami and Cincy, Hunt will be back. And no matter how many reports I see that Chubb will remain the starter and Hunt will be used in a “change of pace” role, I won’t believe it till I see it. The more likely scenario is that the two find themselves in a true even committee that works for the Browns, but not for fantasy owners.

Curtis Samuel has struggled with consistency so far in 2019, finishing 3 games with 14+ PPR points and 3 with less than 7.5. Week 6 was his masterpiece, though, catching 4 of 6 targets for 70 yards and a score and taking his only carry 8 yards for another TD. Samuel has managed to carve out a role for himself in an offense that runs everything through their star RB, which is no easy task. But much like Chubb, Samuel may be hurt by a member of his offense returning to action in a few weeks — his being his old starting QB, Cam Newton.

Kyle Allen has been solid since taking over for the injured Newton, throwing for just 238 yards per game but leading the team to 4 straight wins. Newton, on the other hand, was abysmal in his 2 starts this year, and Samuel caught just 8 passes and scored 0 TDs in those 2 games. The Panthers have their bye this week as well, and follow it up with tough matchups against the 49ers, Titans, and Packers. The schedule takes a dramatic turn down Easy Street after this stretch, but by then, Newton will likely be back, and who knows what this offense will look like? The bottom line is, Christian McCaffrey is the only consistently valuable piece in Carolina’s offense week-to-week. Samuel’s a fine player, but get what you can for him before it’s too late.

Miles Sanders has given fantasy owners a pretty solid ROI so far in 2019, as he’s currently a top-30 RB as a late 5th/early 6th round pick at the earliest. He’s yet to score his first career rushing TD but has made do with the opportunities he’s gotten, both on the ground and in the passing game. And Week 6 was his best performance yet, as he finished with 92 total yards (86 of them through the air on 3 receptions) and a receiving TD in a loss to the Vikings. Some may see this as the Eagles managing to get Sanders his opportunities in a crowded offense, but truth be told, it’s getting a bit too crowded for the talented rookie.

While Sanders’ snaps have decreased virtually every week, teammate Jordan Howard has seen his snap counts steadily increase, peaking in Week 6 when he played 41 of 65 offensive snaps, while Sanders was on the field for just 19. Howard still hasn’t shown much in the passing game, which leaves those opportunities for Sanders in theory, but with so many talented pass-catchers on Philly’s roster, that’s not something you can rely on week in and week out. After a season-low 3 carries, it’s a bit strange to think of Sanders as a “Sell High,” but you’d be surprised at how many people just look at the total output. See what you can get for Sanders this week — especially before he gets to the Buffalo-Chicago-New England-Seattle stretch of his schedule.