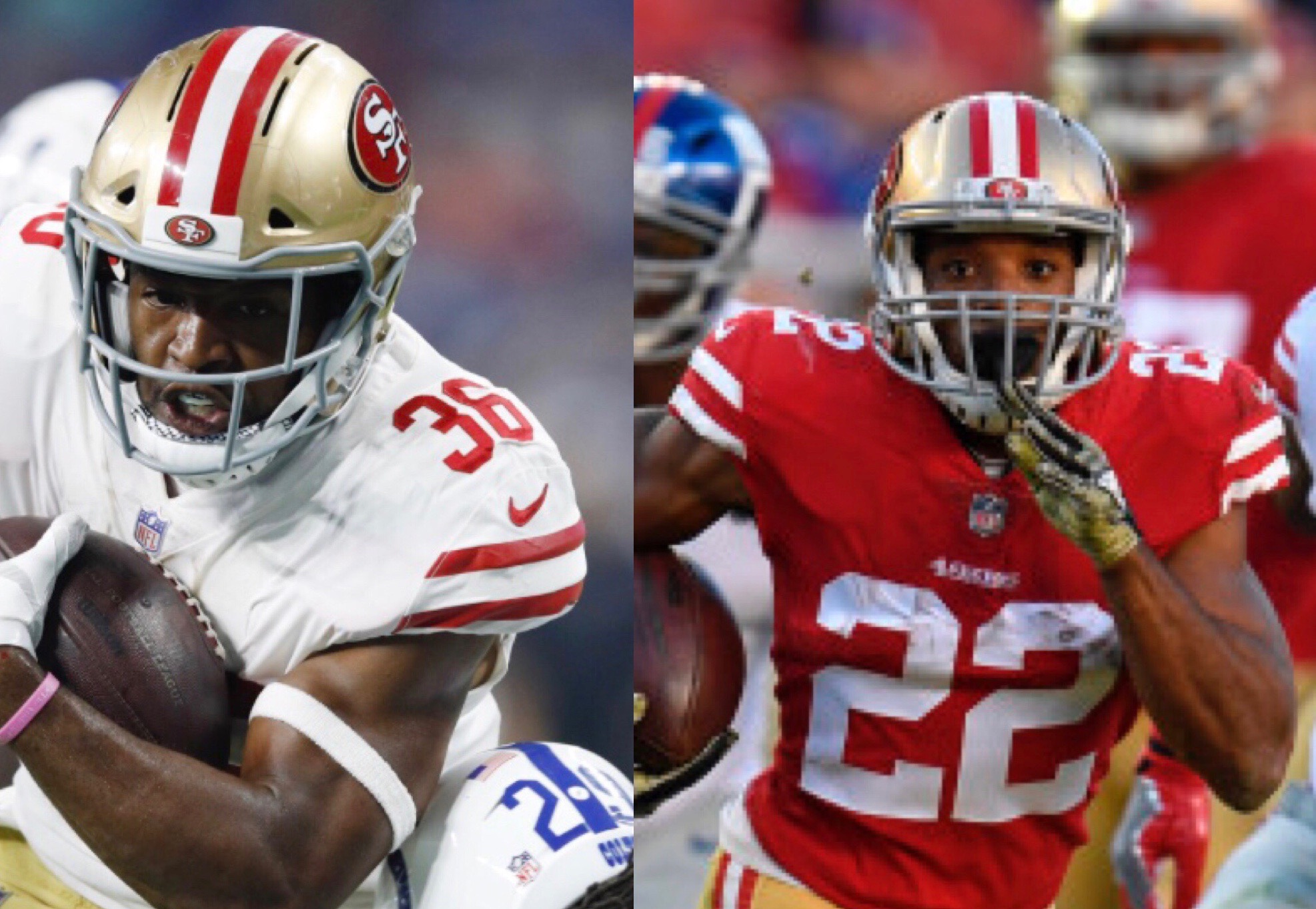 49ers RB Jerick McKinnon tore his ACL making a cut on the final play of Saturday’s practice, and will now miss all of 2018. This is a devastating blow to both the 49ers, who made McKinnon the fourth-highest paid RB in the league, as well as fantasy owners who burned a third or even second rounder to secure his huge upside. The team will now turn to the newly-signed Alfred Morris and sophomore Matt Breida to shoulder the backfield load in a committee. While neither come with McKinnon’s ceiling, they are both immediate must-adds in leagues that have already drafted, and should shoot up Big Boards for those who haven’t yet. Kyle Shanahan’s scheme creates enormous upside no matter who’s on the field (three straight Top-10 RBs, five of last six Top-15) and either back could explode in 2018. But who to target?

Likely to shoulder the heavier part of the rushing load, Morris is the RB fantasy owners should turn to first. Prior to this injury, I’d already written two blurbs on Morris’ huge, rising “Penny Stock” upside. After two years together in Washington, Morris has familiarity and a terrific feel for Shanahan’s outside zone-blocking scheme.  Shanahan handpicked Morris in 2012 as a late-round rookie, and the bruiser rumbled for a whopping 335 carries, 1,613 yards, and 13 TDs. This was followed by a less beastly, but still impressive 276 carries, 1,275 yards, and 7 TDs in 2013.

In his 49ers debut, Morris looked to have plenty of juice even at 29-years old. He took 17 carries for a bruising 84 yards (4.94 YPC), and should be fresh after serving as a backup in Dallas the last two years. Even in his limited Cowboys’ action, he still “had it,” ranking No. 7 of 47 RBs in Football Outsiders’ Rushing Success Rate last season, and No. 4 of 53 in PFF’s yards after contact per attempt.

Even before McKinnon’s injury, Morris’ impressive practice and game play had him headed for a healthy role. As GM John Lynch said in a radio-interview:

“What’s interesting about Alfred is you always think — and this is something Kyle and I have talked about — you always think of a change-of-pace back of being the quick, fast guy, who’s a third-down back…We also had a feeling that we were missing a churner, a guy who could get the tough yards. A mudder, we used to call them. Someone who could stick their foot in a tough condition game and grind out some yard

“Alfred also has a style, a patience, always finding the right hole. He’s played in the offense for a number of years, so he really did look good. That’s what you’re checking with a guy like that. Kyle’s been around him a lot. He’s had great success with him. Bobby Turner, our running backs coach (has as well).”

Now, he’s guaranteed some serious work. Simply put, Morris is a bell-cow style back who gets better the more he’s fed, and is now in line for 15-20 weekly carries his ideal blocking scheme. Moreover, Morris will be the unquestioned goalline back in an offense that should frequent the Red Zone plenty under Jimmy Garoppolo, giving him real 8-10 TD upside to go alongside his 1,000+ yard ceiling. He’s risen to 70 overall and RB28 in my latest rankings.

Two things are holding Morris from cracking my Top-20 RBs and 50 overall, however. Most importantly, Morris offers minimal in the passing-game. He’s averaged less than 12 receptions per season, and doesn’t offer mismatch potential or strike fear with the ball in space.

Second is the presence of Matt Breida. Long-slated for the “Tevin Coleman-role,” Brieda brings game-changing 4.39 speed and strong vision to the table. He was already slated for 8-10 weekly looks with McKinnon healthy, and should see this number get a slight increase now in his absence. He’s the higher-ceiling RB target here, as Breida mirrors McKinnon’s freakish athleticism more closely, and already showed well with 465 yards on 105 rushes last year (4.4 YPC). If Morris wears down or isn’t offering much early on, the team could turn to Breida for extensive work, and he has the rushing skill-set to do serious damage.

Still, Breida is an inconsistent pass-catcher. He graded out as the 45th best back with a 51.0 receiving grade from Pro Football Focus, and struggled with drops both in college and the pros. He’s also never handled a serious workload, and seems likely to stay stuck in a change-of-pace role. But with his game-changing speed and a massive opportunity, Breida’s risen to 108 overall and RB38 in my rankings, just behind James White.

The question remains: with Morris and Breida both below-average receivers, who will benefit from Shanahan’s tendency to heavily target RBs in the passing game? Track the 49ers backfield moves very closely, but the current in-home favorite would have to be Kyle Jurczyk. He’s sure-handed and excellent in protection, and could be a shocking source of 40+ receptions. PPR leaguers should at least add “Juice” to their “Monitor” list.

In summary, expect the 49ers to roll out a committee backfield that still comes with immense fantasy upside thanks to Shanahan’s wildly successful ZBS. We expect Morris to get the first-crack at shouldering the early-down rushing work, with Breida operating in a still-valuable change of pace role, but the upside of either emerging for featured work makes both worth significant fantasy investments — Morris around Round 6, and Breida moreso Round 9-10. Both have capped ceilings, however, due to a lack of pass-catching ability, which is crucial for true three-down work in Shanahan’s scheme.