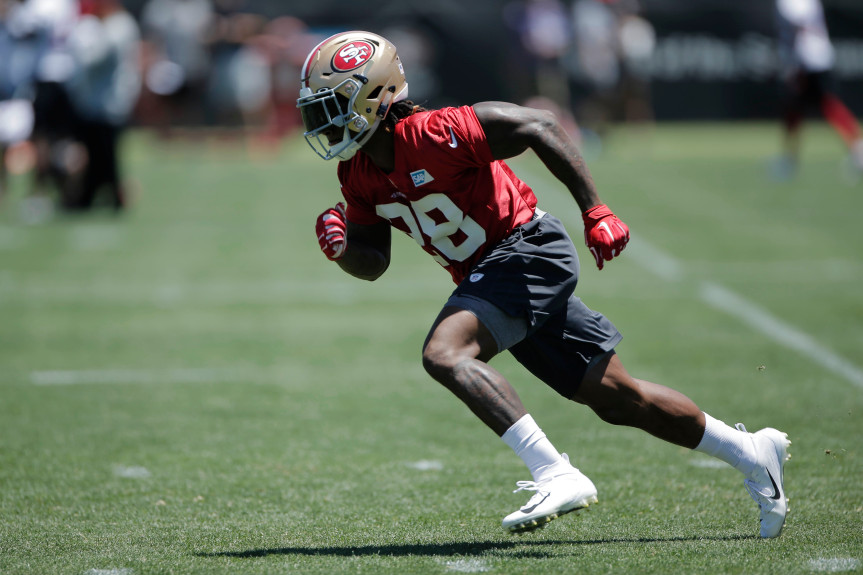 With a lingering calf strain and Alfred Morris nipping at his heels, Jerick McKinnon is becoming a harder fantasy investment to trust.

After being helped off the field and getting an MRI in a mid-August practice, new 49ers RB Jerick McKinnon was diagnosed with “just a muscle strain.” Thus, fantasy owners everywhere breathed a collective sigh of relief… but this may have been premature.

In McKinnon’s absence, Alfred Morris was brought in for a look, and has rumbled. Getting the start in his first action as a 49ers, Morris took 17 carries for a bruising 84 yards (4.94 YPC). More importantly, he made an enormous impression on GM John Lynch, who suggested Morris could be the Week 1 starter, and will carry an enormous backfield role regardless.

On Wednesday, Lynch joined the “Murph & Mac” radio show, and was asked about NFL Network analyst Brian Baldinger’s statement that “It’s a pretty good bet that on September 9, this man, Alfred Morris, will be the starting tailback for the San Francisco 49ers.”

Rather than shut this down, Lynch only added further fuels to the fire, noting: “His take on Alfred was exactly right.”

Granted, Lynch didn’t mention any setbacks for McKinnon or Matt Breida, and he isn’t the one ultimately making this decision. Kyle Shanahan could come out and flip this entire report on it’s head.

Still, Lynch did mention he and Shanahan both discussed a healthy role for Morris after this performance, considering the different element he brings to this attack:

“What’s interesting about Alfred is you always think — and this is something Kyle and I have talked about — you always think of a change-of-pace back of being the quick, fast guy, who’s a third-down back. I think the way we’ve comprised our roster with a premium on speed and matchup issues for a defense, we just had a feeling — number one, we got injured.

“We also had a feeling that we were missing a churner, a guy who could get the tough yards. A mudder, we used to call them. Someone who could stick their foot in a tough condition game and grind out some yards…Alfred also has a style, a patience, always finding the right hole. He’s played in the offense for a number of years, so he really did look good. That’s what you’re checking with a guy like that. Kyle’s been around him a lot. He’s had great success with him. Bobby Turner, our running backs coach (has as well).”

Indeed as Lynch noted, Morris has a highly successful history with Shanahan. While with Washington, the HC handpicked Morris in 2012 as a late-round rookie, and the bruiser soon supplanted the nominal starter after a studly preseason.  Morris proceeded to rumble for a whopping 335 carries, 1,613 yards, and 13 TDs. This was followed by a less beastly, but still impressive 276 carries, 1,275 yards, and 7 TDs in 2013.

Meanwhile, Shanahan has done nothing but praise Morris since their reunion, especially after Saturday’s contest:

“I was real pleased with how Alf ran the ball…We could start seeing it during the week of practice, he was running the ball well and our O-line was blocking well. I was very excited how it carried over to the game… I was real happy with that group as a whole. since Morris ”

In fact, Shanahan “saw enough out of Alf at Indianapolis” that Morris is likely to sit out the rest of the preseason action… perhaps in anticipation of a Week 1 start.

All in all, McKinnon is still likely to be, by far, the top fantasy option out of the 49ers backfield. The team is too financially invested (McKinnon trails only Le’Veon Bell in 2018 salary), and McKinnon is too dangerous a fit in this scheme — he was a fringe first-rounder on my Big Board not too long ago. He still carries a very real RB1 ceiling, even if it takes a little longer to fully realize it. This might ultimately make him a high-end bargain by the end of 2018.

But I’d be lying if I said I wasn’t very nervous right now. Calf injuries can linger. Shanahan isn’t afraid for last-second backfield switches, as Morris himself proved. And McKinnon now seems likely to at least lose the GL touches. Thus, McKinnon’s risk continues to grow, making him now more of fourth-rounder than a third. Meanwhile, Morris becomes a must-target Penny Stock in the off-chance he starts, thrives, and never hands the job back… especially since this has happened with the same exact player and coach before.