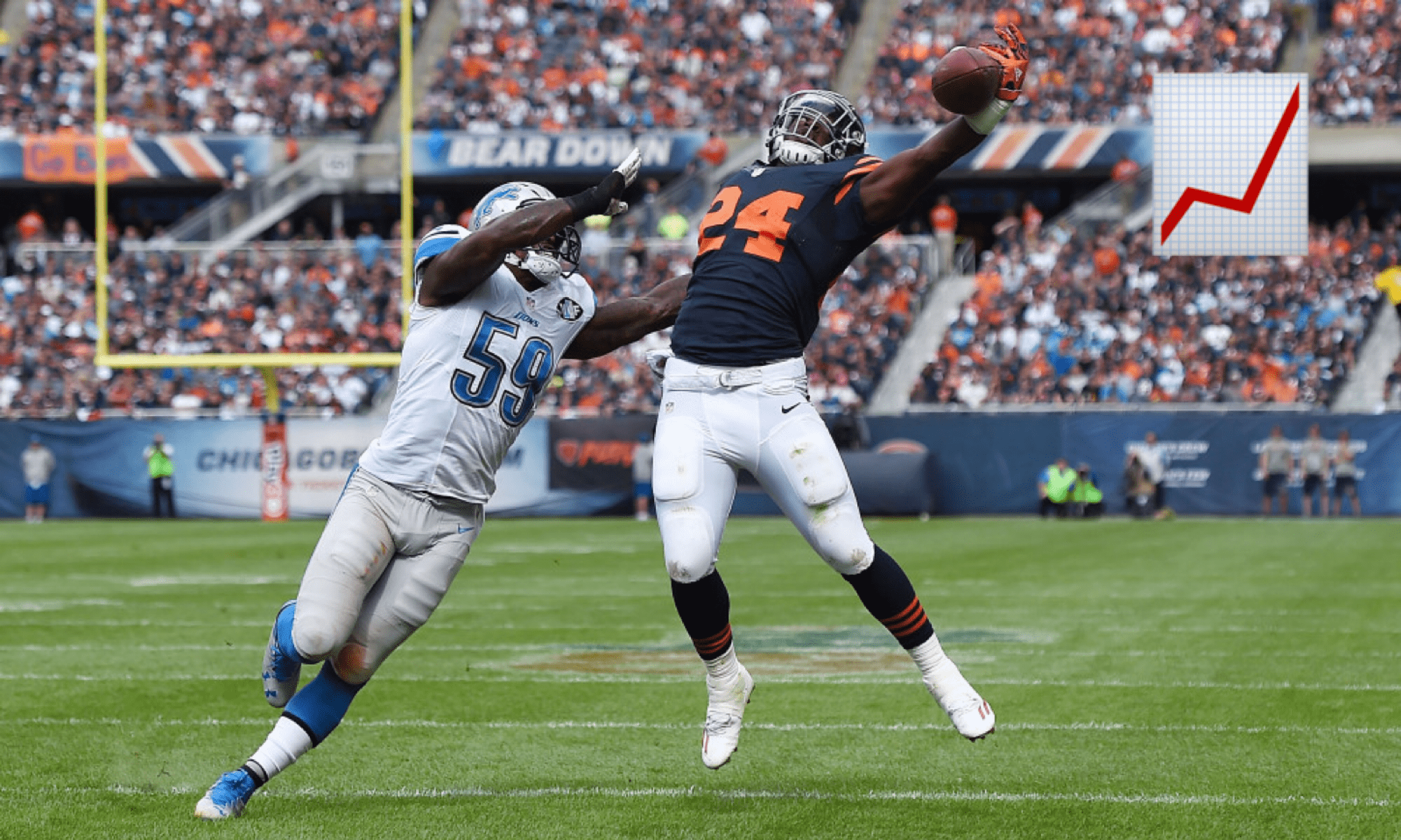 Already a beast, Jordan Howard should explode even further in 2018 with a better-fitting run scheme, more receiving work, and inside a far more explosive overall offense.

After coaching Kareem Hunt to a 2017 Rushing Title, new Bears HC Matt Nagy has insisted the running game will remain a staple to his 2018 attack: “We do believe in the run — trust me,” Nagy said. “And 24 (Howard) and 29 (Cohen) and the rest of the guys understand the significance of it.” Howard’s already been a beastly runner since joining the league,  as he holds the Bears’ record for most rushing yards through a player’s first two seasons (2,435 yards, 4.6 YPC).

Still, he’s set up for his best season yet in a more creative, run-centric attack that features more shotgun runs and fits his style of play far better. This is only emphasized with Nagy insisting they’ll “keep him on the field on third down,”  making Howard the ideal Round 2 RB (especially if you go WR in Round 1).

As the above report details, Nagy’s attack will transition from John Fox‘s heavy outside zone-running, to more inside zone, often run out of the shotgun; over 45 percent of Kareem Hunt’s carries came from this formation under Nagy, and the shotgun-based inside zone was a staple of OC Mark Helfrich at Oregon. This is perfect, as Howard’s excelled up the gut and especially out of the shotgun formation, averaging 6.5 YPC on runs from the shotgun as compared to 4.3 YPC when the quarterback was under center.

In fact, Howard’s best fantasy output of 2017 was a 147-yard and 2 TD monster vs. the Bengals in Week 14. Here, he racked up 97 of his yards (65%) and both TDs on just 10 shot gun carries (43%). Howard has superb vision, which flourishes even further when he can time his cuts and blocks out of a shotgun formation.

Howard credits this success to familiarity from his college days, where he ran inside zone nearly exclusively from the shotgun formation: “A lot of the run schemes that we’re doing I did in college,” Howard said. “And some of the run schemes we did last year (we’re still doing), so it’s pretty similar to me. It’s not hard to pick up. The offensive line (has) been doing a great job of taking (to) Harry (Hiestand)’s coaching.”

Beyond the improved rushing attack — already a strength of Howard’s — the talented back will benefit from more receiving game usage. He’s been arguably the worst pass-catching back in the league, with 14 drops in his first two seasons, but has worked diligently at the jugs and on the side of every practice to improve. Nagy has called him a “three down back” on multiple occasions, and with the explosive Tarik Cohen lining up everywhere, the two seem likely to share the field even on third downs.

Howard’s already been a fantasy RB1 in back-to-back seasons while trapped in a John Fox scheme with no surrounding talent… aka fantasy hell. Now, with a better-fitting rushing scheme, more receiving work, and vastly improved “Surrounding Talent” that’ll help generate more scoring chances (where Howard dominates), Howard’s set to explode for monstrous RB1 totals… for a late Round 2 price. This is the type of “Steal” that can win leagues.