The Ultimate WR Bargain in Fantasy Football is… 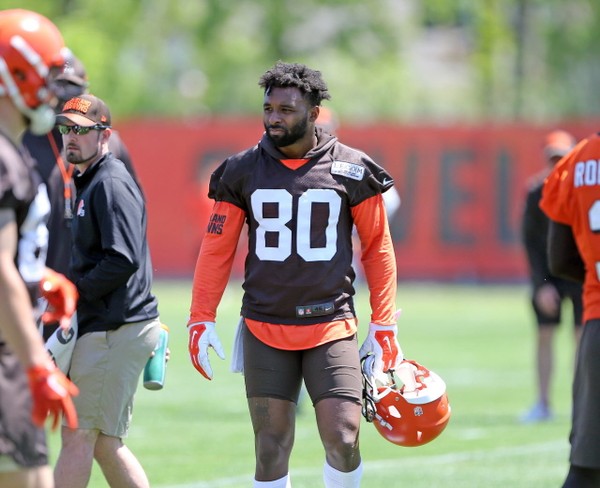 As a preview of our Preseason Kickoff Guide, we reveal one of our favorite bargain WRs of 2018, who goes for a WR3 price but will finish the year as a WR1.

Whether finding a promo code for $20 off those gameday tickets or haggling $1 off a weird wolf painting at a random yard sale, humans love bargains. We want to feel the value we gain from a purchase equals or, better yet, exceeds the amount we gave up for it. Fantasy football is no different. We want the players who outperform where we draft them, and offer potentially huge profit returns, all while outscoring other similarly-priced options. There’s simply no better feeling than landing those guys who explode and provide you value well beyond what you paid, and thus I’m constantly scouring the market (FantasyPros’ ADP and ECR tools) for the top values.

Plus, now deep into Training Camp and game-action, the fantasy market is far more secure now. Yes, preseason play (Week 1 breakdown here), training camp reports, and injuries will continue, causing risers and fallers all over fantasy big boards (be sure to track every move and shake on our own Fantasy Football Stock Watch).

Nonetheless, outside of Derrius Guice (RB – WAS) type of bombs, very few shockwaves should happen between now and your draft day. As such, I’ve cranked out a Preseason Kickoff Guide filled with 10 bargains, 11 overpriced pitfalls, and 15 late-round penny stocks for your viewing and debating pleasure (hit me up on Twitter with all your praise or venom). This will be updated right up to Draft Days as well.

Considering Tyreek Hill (WR – KC) was my poster boy for bargain hunting in 2017, let’s begin with another Round 5 WR who I believe will yield WR1 value when 2018’s said and done:

ADP: 52, WR23
ECR: 61, WR25
My Rank: 38 (+14, +23), WR16 (+7, +9)
As a general fantasy investing and bargain hunting preface — quality drafting is a tricky balancing act of getting the assets you want, while manipulating the prices that the market and experts have set. Even if I have, Landry up at 38 overall, or 23 spots higher than his ECR, this does not mean you should take him this high if the market is underselling his value is in the 55-60 range. Make sure you secure him, yes, but take advantage of the insane deal and grab another asset or two before he’s on other owners’ radars.

Whether by his former Dolphins team or fantasy owners, Landry seems to be continuously disrespected despite his consistent achievements. Maybe his lack of a prototypical build or game-changing athleticism blinds owners from realizing just how talented Landry indeed is. Yet, despite finishing as the standard WR14 and PPR WR5 in 2017 — ahead of Michael Thomas (WR – NO) and Julio Jones (WR – ATL) — Landry’s once again shaping up to be a massive bargain.

Most can at least recognize Landry is the NFL’s premier short-to-intermediate receiver — tough to argue when his 400 career receptions are an NFL record for a player’s first four seasons (by a whopping 58 catches, despite subpar QB play). Landry’s short area burst and quickness and ability to fight through press coverage are second-to-none (well, maybe Antonio Brown (WR – PIT)), allowing him to shake free with ease at the line for the quick-hitters and YAC opportunities. On that note, he’s also incredibly dangerous after the catch, playing with the intensity of a running back with the ball in his hands, making defenders miss, and seeking out contact in equal measure. And, of course, his glue-like hands rank among the top of the league.

Perhaps because he’s under six feet tall, few recognize how well he thrived in the red zone last season when finally utilized properly. Through plenty of slants, outs, and rub routes, Landry was constantly open inside the 20, racking up an NFL best 18 catches on 23 RZ targets, while trailing only Jimmy Graham (TE – GB) with nine RZ TDs (Graham had 10). More impressive? All nine of these scores came within the 10-yard line, where Landry topped the NFL in scores, yards, catches, and target percentage. Adam Gase maximized Landry’s uncanny ability to gain space at the line with quick hit slants, as well as his toughness as a runner with the ball in his hands on screens — Landry simply would never go down and be denied at the stripe.

The Usage and Opportunity

Landry tied with Larry Fitzgerald (WR – ARI) for the third-most targets in 2017 (161), so expecting a volume increase would be foolish. This is especially true if Josh Gordon (WR – CLE) returns, as he’d surely command a hefty piece of this aerial pie. Yet, what seems destined to change is the quality of these looks under new OC Todd Haley. A former WRs coach, Haley is a master of utilizing his players’ strengths to the fullest, especially his pass catchers. Whether squeezing flat-out dominant stats from elite talents like Antonio Brown (WR – PIT) and Larry Fitzgerald (WR – ARI), or helping a slug like Dwayne Bowe(WR – FA) haul in 15 TDs and a nobody, like Steve Breaston (WR – FA), top 1,000 yards, Haley’s track record with WRs is unquestionable.

Though Landry lacks AB’s long speed, he’s similarly dangerous off the line and after the catch, which should allow Landry to feast in this scheme (again, including in the red zone). Landry’s also already been used outside and down the field far more often under Haley in early camp practices, as beat writers noted, “Haley trusts Landry to do much more than run five-yard hooks and sit in the soft spot of the defense. He’s been able to get open on a variety of routes, including about 20 yards down the seam.”

Landry himself is well aware of the improved usage, noting:

WR Jarvis Landry said #Browns OC Todd Haley has 3x the number of routes for him in this playbook vs what he was allowed to run in Miami: "He doesn't just treat me as a slot guy."

Most importantly, we’re seeing it in action as well. Though overreacting to “preseason puff” is a sheepish move, it’s still crucial to identify usage trends and QB-WR rapports, especially for a player on a new team. Note the following disparity already being seen in Landry’s usage in his first game with Cleveland:

On just 1 rec, his first catch with the #Browns, Landry has already matched this 30+ yd total. https://t.co/yEeCrcr8sp

Though only one play, the Browns seem likely to move Landry around far more, expand his vertical route tree, and capitalize on his excellent ability at the catch point. Thus, even if Landry’s total targets dip amidst a more stacked weapon’s cabinet (assuming Gordon shows), this improve usage under Haley has to be considered a huge win. Landry will still be peppered with plenty of screens and YAC opportunities — perhaps similar to Haley’s past usage of RBs like Le’Veon Bell (RB – PIT) and Jamaal Charles (RB – FA). But, finally, Landry’s other talents will have a chance to flourish.

Beyond the coaching scheme upgrade, Landry also gets paired with arguably the best QB of his career in Tyrod Taylor (QB – CLE). Though he may throw a gorgeous long ball, Taylor has always been reluctant to uncork it, and much prefers a solid checkdown — he’s incredibly careful with the ball (NFL-lowest five interceptions in 2018), and rarely pushes down the field without absolute certainty. This plays into Landry’s game perfectly.

Yet, under the more aggressive Haley, perhaps TyGod will unleash a bit more in 2018. In his Browns debut, Taylor was masterful, going five-for-five for 95 yards and a TD in two drives of action. Most encouragingly, three of his five passes traveled 20+ yards. The first was the aforementioned 32-yard strike to Landry down the field. Next, Taylor showed perfect placement on a 21-yard back shoulder dime to Rashard Higgins (WR – CLE), before capping off his night by hitting a streaking David Njoku TE – CLE) down the seams for a 36-yard TD.

The only surrounding talent risk could be Josh Gordon (CLE – WR),a physical specimen who could easily be the dominant target here. Let’s see him show up first before worrying too much, though. And even assuming Gordon does return and dominate, I expect both wideouts to top 1,000 yards — Haley had three WRs top this threshold with the Cardinals in 2008 (Fitzgerald, Anquan Boldin (WR – FA), and Breaston), so surely two of the NFL’s premier talents can do the same. Plus, the wideouts have entirely different skillsets and attack different quadrants of the field. A long-striding Gordon, streaking down the field, would open up oodles of underneath space for Landry to feast.

Whether available or not, I don’t consider Gordon a detriment to Landry in the least.

As of now, Landry is my favorite Rounds 4-6 WR to explode into WR1 territory. He has high-end (and still blossoming) individual talent. His volume should remain similar in amount, but far improved in quality under Haley. He’ll be catching passes from potentially the highest quality quarterback of his career in Tyrod Taylor (QB – CLE). In short, Landry scores highly in every single value indicator on our Fantasy Stock Formula. All of these should facilitate his best, most well-rounded stats yet.

Unsurprisingly, the on-field results have been gold thus far. According to the Cleveland Plain Dealer, Landry’s become Taylor’s “go-to guy” in camp while catching “everything within reach.” This is unsurprising after he ” dazzled in minicamp with one-handed catches and plenty of touchdown receptions from Tyrod Taylor.” Let others sleep on his insane upside because of past inefficiency or lack of WR1 build or elite athleticism. Instead, round out your WR corps with a high-WR2 floor, high-WR1 ceiling in Round 5.

Make sure to join The Fantasy Football Wolfpack to receive our Preseason Kickoff Guide filled with 10 bargains, 11 overpriced pitfalls, and 15 late-round penny stocks for your viewing and debating