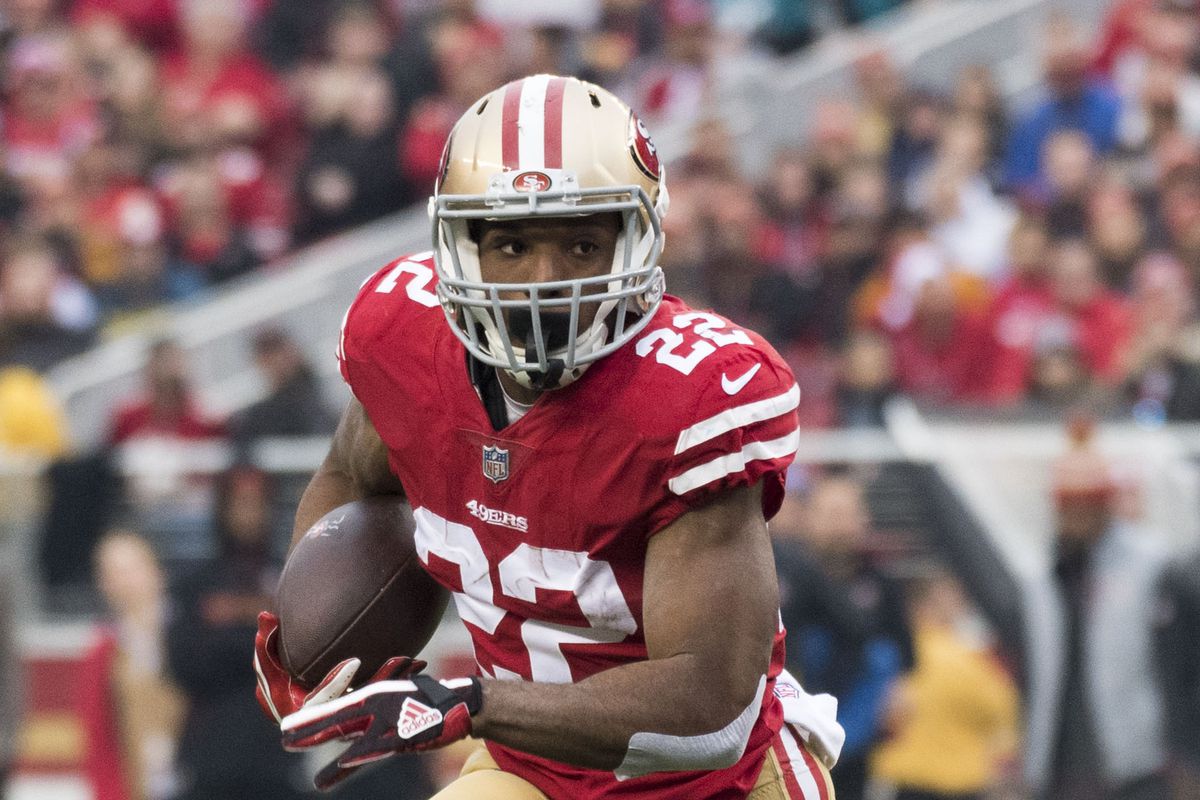 Here I was placing the finishing touches on an article, this article, highlighting that Matt Breida was being drastically overlooked and detailing why he should be owned in every league. Then the news broke. Those pesky 49ers felt the need to go out and sign veteran running back, Alfred Morris. As you could imagine, I involuntarily belted out one of George Carlin’s seven dirty words and pondered what to do with this article that had become somewhat compromised. After consulting with my constituents we concluded that given the value of San Francisco’s backup running back position, the topic needed to be addressed. Continue reading as I breakdown why it is STILL a good idea to own Matt Breida and how Morris’ arrival impacts San Fran’s backfield.

In the 49ers’ first preseason game of 2018, second-year ‘back Breida suffered a shoulder injury which is expected to shut him down for the remainder of the preseason, and you know what? I don’t care. An MRI revealed that Breida avoided any structural damage, and the team plans to have him back by week one of the regular season. This will simply prevent Breida from accruing any pre-draft hype, suspending his Average Draft Position (ADP) at a very affordable 170th-overall on ESPN.com.

Meanwhile, backfield mate, Jerick McKinnon, is currently the 14th running back being drafted at the steep price of 29th-overall. McKinnon Mania began when San Francisco inked him to a four-year deal worth $30 million back in March. The 26 year-old’s cap hit of $10.5 million will make him the second-highest paid running back in the league this season behind only Le’Veon Bell. Head Coach Kyle Shanahan has produced a top-ten fantasy ‘back (PPR) each of the past three years, and quarterback Jimmy Garoppolo raised the team’s points per game average from 17 to 28.8 in his five starts after being acquired via mid-season trade.

Between his payday, his coach and his quarterback, McKinnon’s hype has snowballed into dangerous territory for a player who has never surpassed 202 touches in a given year. Simply put, McKinnon’s durability will be tested this season, as he’s in line for a workload heavier than previously experienced. That concern has been amplified by a calf strain the rusher suffered this past Sunday.

Just to be clear, I am not advocating fading McKinnon, but rather attempting to shine light on Breida’s overlooked value.

If you draft McKinnon, consider Breida a must-own handcuff. However, the 23 year-old offers much more than merely injury insurance.

Breida signed with San Francisco last spring as an undrafted free agent out of Georgia Southern, where fate would have it he backed up McKinnon as a freshman. He was the 49ers’ most effective ‘back as a rookie, outpacing starter Carlos Hyde by an average of .5 Yards Per Carry (YPC) and 2.7 Yards Per Reception (YPR). In total, Breida finished the year with 106 carries for 465 yards, 21 receptions for 180 yards and three total touchdowns, making him RB47 in PPR leagues. For the record, Breida’s averages bested those of McKinnon last year as well, but I digress.

Over the offseason Breida reportedly added ten pounds of muscle to his frame while retaining his 4.39 speed. He also claims to feel much more “comfortable” in Shanahan’s notoriously complex offensive scheme. Breida’s improvement have been glaring to everyone at 49ers camp, especially The Press Democrat Sports Columnist, Grant Cohn, who recently described Breida as, “the best running back on the team.”

With Breida’s talent so evident, Shanahan will certainly integrate him into the weekly game-plan in some complicity. We witnessed an example of the coach’s offense being capable of sustaining two fantasy relevant rushers just two seasons ago. As Atlanta’s Offensive Coordinator in 2016, Shanahan’s starting ‘back, Devonta Freeman, finished as RB6 while second stringer Tevin Coleman ended the year as RB19.

While a top 20 finish for Breida seems rich, he does possess FLEX upside because of his ability to coexist with McKinnon.

How Morris’ presence affects that outlook is yet to be determined. While the 29 year-old does have three 1,000 yard seasons to his name, the vet hasn’t reached that milestone since 2014. At the moment, Morris’ signing appears to be a measure to improve depth while Breida and McKinnon recover from their respective ailments.

The 49ers offense will be a blast to watch this season, and everyone is going to want their share of the fun. McKinnon is currently the team’s most expensive asset, and he may prove to be well worth his asking price. But whether you take a chance on McKinnon or not, Breida remains an underrated late-round flier.