Is Derrick Henry Just a Plodder? Or a Sleeping “Titan” Primed to Explode? 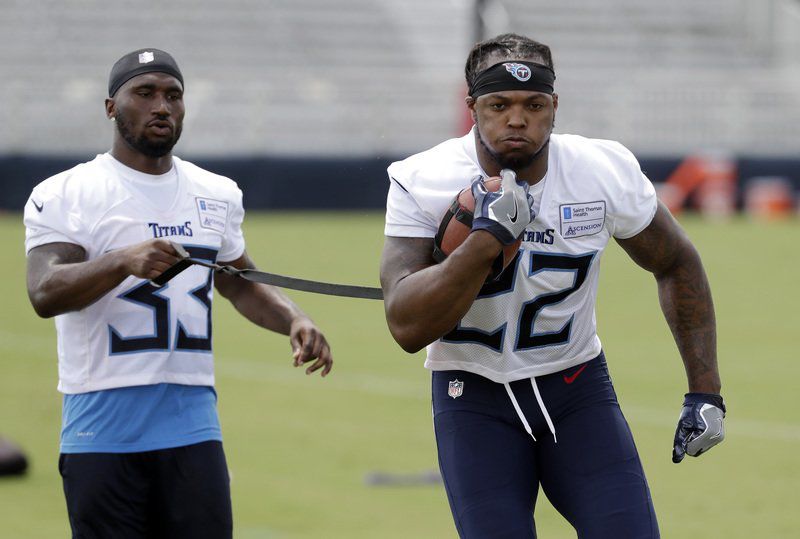 Should the addition of Dion Lewis scare you away from Derrick Henry?

Can this NFL season get here fast enough?  I find myself constantly looking at the date waiting for fantasy football to start.  I’m ready to see who makes the great leap forward, who disappoints, and what surprises await.  This offseason in particular seems to be filled with polarizing players and a ton of varying opinions about them.  One of the most curious, exciting, and difficult players to figure out this season would have to be Derrick Henry.  Some see Henry as an absolute beast who was smothered by gag-worthy play calling and a lack of volume.  Others see Henry as nothing more than a plodder who doesn’t schematically fit with what LaFleur is trying to do.  I am a Henry truther and below I am going to explain exactly why Derrick Henry is about to explode in 2018.

Anyone that looks at Henry has to double take because he resembles a linebacker.  He’s a 6’3″ 247 lb. bowling ball with good vision and deceptive break away speed.  When most people think of speed they think of 40 times.  Not everyone can be human cheetahs like Tyreek Hill and John Ross, but Henry’s speed is still certainly nothing to sneeze at.  Henry ran a 4.54 40 at the combine, but that’s not the kind of speed that has my head turning.  Henry’s speed score, which factors in weight and size, was in the 97th percentile and his burst score was in the 88th.  In fact, on a 75-yard touchdown run against the Texans, Henry hit 21.64 mph according to NFL Next Gen Stats.  For context, the top recorded speed in the NFL last season was from Leonard Fournette at 22.05 mph.

All the Henry naysayers still point to the fact that Henry is a giant man and profiles as a straight line runner.  That’s not entirely true.  Henry is at his best when he can get a full head of steam and turn on his jets.  However, according to Pro Football Focus, Henry was the 9th most elusive back in the NFL last season.  Pair that with the fact that Henry plows forward for 3.58 yards after contact, which is top 3 amongst 2017 RBs.  As far as a rusher goes, Henry has all the speed, power, and elusivity anyone can ask for.

Henry has all of the opportunity to break out.  Former backfield mate DeMarco Murray dominated the rushing and pass catching during their shared time with the Titans.  All 184 of Murray’s rush attempts from last season are up for grabs and I fully expect Henry to command at least 75% of those.  Henry’s new backfield mate, Dion Lewis, has a proven track record of being the better pass catcher and an excellent change of pace back.  However, the injury bug has often plagued Lewis when he tries to take on workhorse duties.  To me, this further cements Henry as the workhouse back of the Titans offense; and with the Titans offensive line that is something to be excited about.

Matt LaFleur has made a huge splash in Tennessee without so much as calling a single play in a game.  LaFleur has been groomed under the tutelage of offensive genius Kyle Shanahan, working under him with the Washington Redskins and the Atlanta Falcons.  Shanahan has been the offensive coordinator for some of the best running back seasons in recent memory.  In 2012, Shanahan helped turn a rookie sixth round pick named Alfred Morris rush for 1,613 yards and 13 touchdowns.  In 2016, Shanahan helped Falcons running back Devonta Freeman rush for 1,079 yards and 11 touchdowns while also catching 54 balls for 462 yards and two touchdowns.  Shanahan knows how to get the most out of his running backs and he has molded LaFleur in his coaching image.  Look for Henry to get a workload more similar to Morris’ in 2012 but if LaFleur is anything like Shanahan, expect Henry to command a reasonable amount of targets in the passing game too.

Henry has a significant difference in his numbers when he gets 10 or more rush attempts and less than 10 rush attempts.  When Henry gets a good volume of carries he averages 4.79 yards per carry.  Henry has had 10 such games like that in his career and has rushed for 6 touchdowns, which translates to 9.6 touchdowns per 16 games.  On the flip side of the coin, when Henry has less than 10 rush attempts, he averages only 3.97 yards per carry.  Henry has had 19 such games and only scored 5 touchdowns, which would project to only 4.2 touchdowns per 16 games.

Clearly with more ineffective games under his belt than productive games there is room for concern.  However, given the new run friendly zone blocking scheme that LaFleur is implementing, Henry’s obvious talent, and the potential for a heavy workload has me trying to buy Derrick Henry wherever I can.  With his ADP currently number 36 overall we are a little higher on Henry than the consensus ADP (40), and for good reason too.  Henry is in a prominent position to explode.